We popped down to Walkabout in Leicester on Friday as earlier in the week I’d seen that they do a stonking Happy Hour offer of 50% off food and drink between 5 and 7pm. This seemed too good not to try for size, since we had a number of errands to run after work and weren’t back in town until 6.30pm.

Walkabout is an Australian theme pub. Therefore they offer kangaroo on the menu and an actually surprisingly good range of Australian, New Zealand and other bottled beers as well as the usual suspects on draught. So far, so good. The staff were really friendly and helpful, giving us a great welcome in the busy bar. However, after that, I’m afraid the experience went downhill.

The decor is tired and scruffy throughout, particularly in the corridor to the toilets. It looks like it was decorated 10 years ago and then has not been maintained since. Although generally clean, everything, including furniture, bar, right down to the little trugs for sauces, has seen better days and gives a feeling a woeful neglect once you take more than a cursory glance. This means it’s not the most comfortable place to enjoy a meal.

This general feel of neglect from the management continued with the availability of items. When I had popped in earlier in the week on an unrelated matter, there had been no draught drinks at all available and no mayonnaise. When I returned on Friday the draught was happily working again, but there was still no mayonnaise and also no steak. I can understand that the 50% off deal must be popular, especially on a Friday evening, but surely since they offer this on every single week day the manager responsible for ordering could be just a smidge more on the ball? 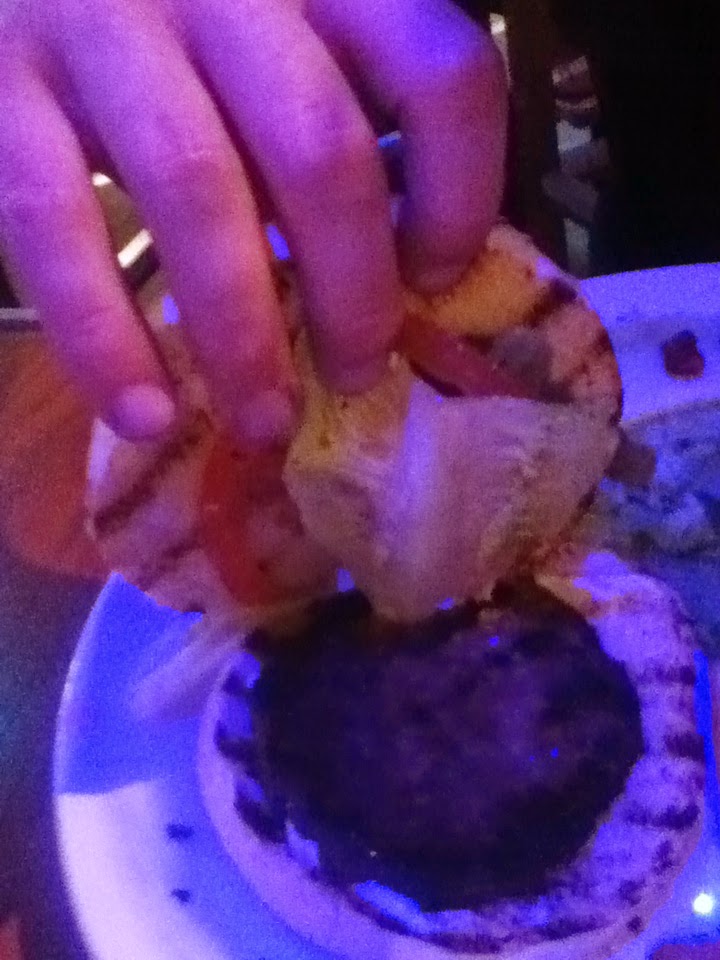 Unfortunately, it was not discovered that they were out of steak until we had ordered and paid. The Boy ordered the kangaroo burger instead, for the novelty. Little did we realise that the novelty would be playing ‘Hunt the Pattie’. The burger was miniscule, overcooked and dry. Hugely disappointing all round. When I approached one of the very helpful staff members to mention the size, but also that the dish we had ordered as a replacement was actually cheaper than the one we had paid for she not only refunded the difference, but actually refunded the whole dish – which made us feel better. However, I would warn anyone against getting this on a whim for full price – at £7.95 you will be distinctly disappointed. 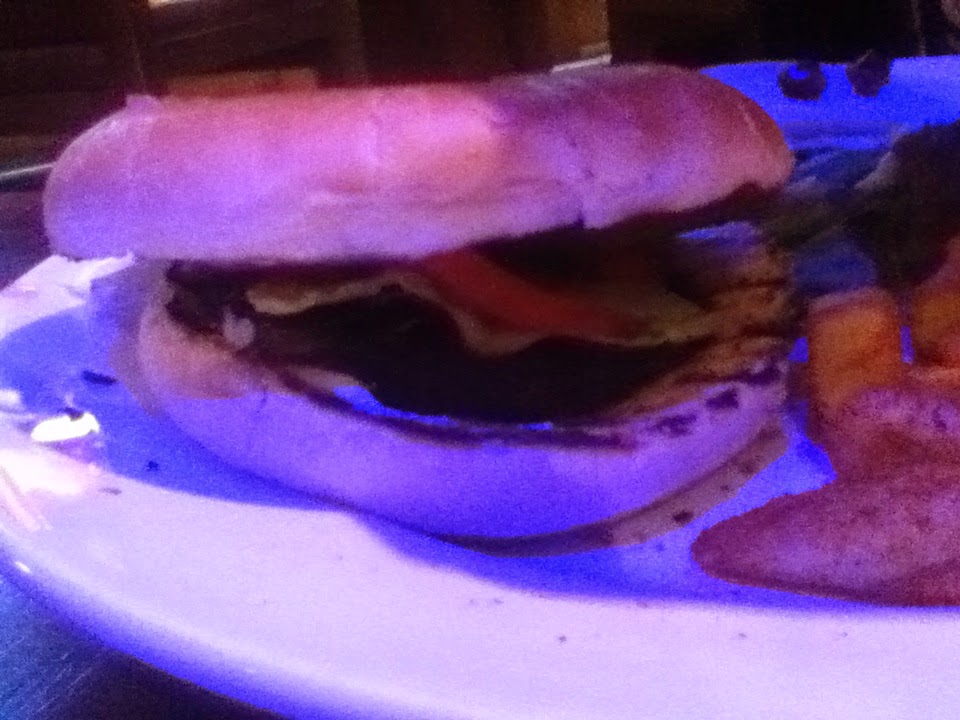 It wasn’t all bad though. We both had the spicy, rather than normal fries, and these were delicious. Very much ‘a flavour of spice’ rather than ‘spicy hot’, I really enjoyed the flavours in these, a nice mix of sweet paprika, some cayenne and some other spices that I couldn’t identify, these were packed full of taste and a much more interesting accompaniment than plain chips. We also enjoyed the salad of lettuce, melon and pomegranate seeds which added a bit of interest, but weirdly did seem to come with absolutely every dish. I’m not sure melon goes with *everything*, but maybe the Australians would disagree. 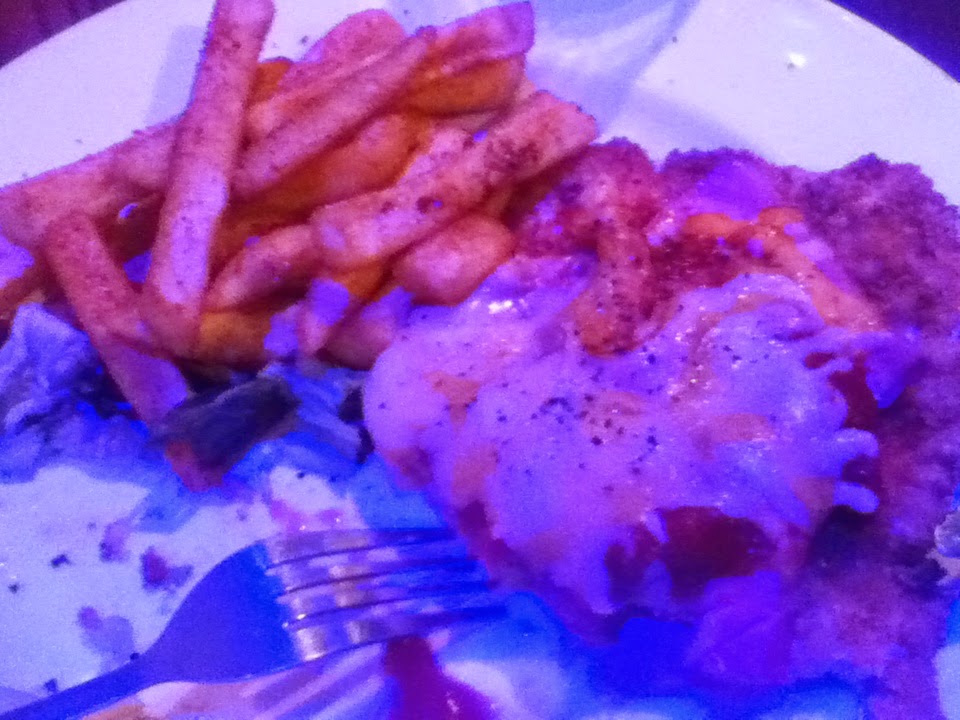 I had the Chicken Parmigiano, which I have to say offered significantly better value for money and flavour. A breaded chicken steak was topped with tomato sauce, ham and lots of melted cheese, the chicken being well cooked and not dried out, helped also by the sweet sauce and two kinds of unctious melty cheese. As chain pub food goes, it wasn’t the worst. I was 100% pleased that I hadn’t ordered a burger! However, I did want some mayonnaise for my chips and I couldn’t have it, so that was a bit disappointing.

At 50% off, our drinks were super cheap. I had a glass of wine which I think cost about £1.60 and The Boy was drinking Fat Yak pale ale at a similar price. Absolute bargain. So all in, for the really joyously friendly staff, relatively quick service and decent drinks at bargain basement prices, I feel compelled to give Walkabout 4 out of 10 Extreme Points. I’d definitely drink there again, if I happened to be in the area during Happy Hour but I don’t think we’ll bother with the food or make a special effort to pop in there specifically again.