We’ve just got from a lovely week in the Barcelona and boy, do I have a lot of blogging to do as a result! So let’s make a start on a real high note – the Cal Feru wine merchants and Californian style tasting room in Sant Sadurni D’Anoia, near Barcelona. 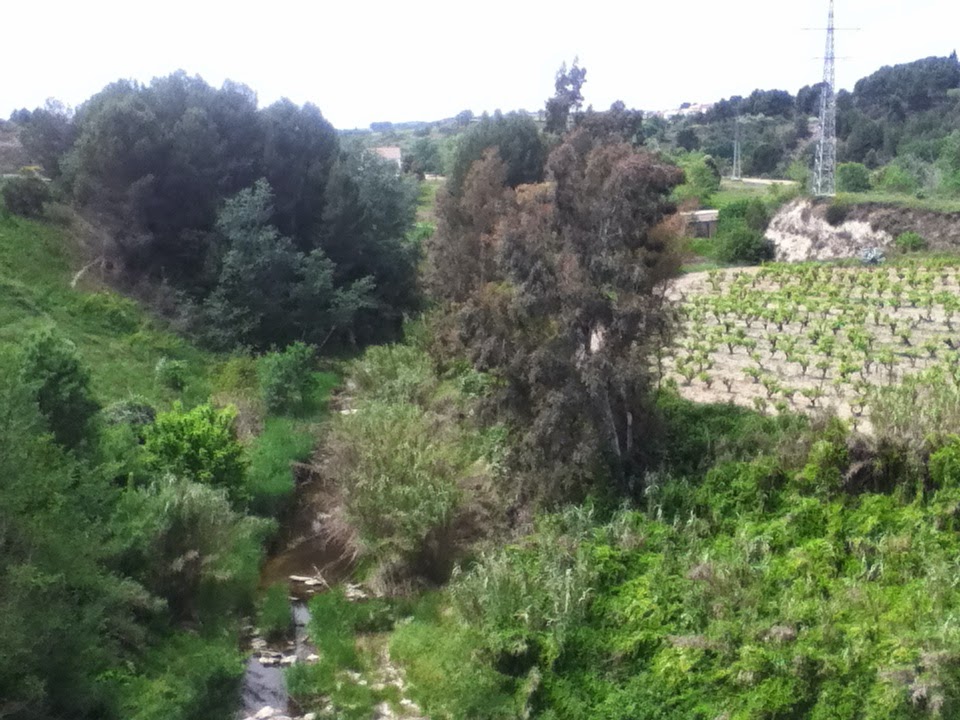 Sant Sadurni is a sleepy little town that is easily reached from central Barcelona on the Route 4 train. It takes less than an hour and leads you out of the city through some lovely countryside, with an increasing amount of vineyards on all sides. Once in town, follow the winding path around the Freixenet winery – I think you can safely ignore that place, there are much better cavas around in this town – about 70 wineries as I understand…

You’ll soon find yourself in the city and you can easily walk around the whole place in short order. On one of the first streets you encounter you will find Cal Feru, a place with a great pedigree but also a really contemporary feel.
We were hosted by Xavier Roig, the latest in the line of Roigs to handle the reins of this successful business. Whilst being extremely proud and respectful of his family’s traditions, he was also not afraid to try new things and has taken Cal Feru in a really exciting direction. It turns out that he is also possibly the nicest person in wine, clearly knowlegable and in love with the products he sells and just all round a fun, friendly dude. He really made our visit to Sant Sadurni something that will stay in the memory for a long time.
Since 1934,  Cal Feru has been selecting the best wines for its customers, at first selling them unbottled to customers around the Barcelona. Downstairs is a small museum dedicated to the history of the Roig family and their business, showing how the first generation of the family at first took huge barrels of cava daily by horse and cart into the city. There is a bunch of historic equipment that they have used, showing how methods of filling barrels and delivering wine has changed over the generations.
I particularly liked the old Liquores sign that is now in the basement. Xavi told us that because electricity was so expensive, when it was outside of the shop it only used to be lit twice a year – once at Christmas and once during the main fiesta, and even then probably only with one bulb. Now it appears to be fully lit at all times – but in the basement where only a handful of people will see it! I think the most amazing thing about this museum area is that we completely did not expect there to be so many rooms in the cellar! We were told that Sant Sadurni D’Anoia is like a swiss cheese – under the ground numerous rooms and tunnels have been hewn in the rock of the hills – and I can well believe it. Everywhere we visited was like a Cava Tardis. 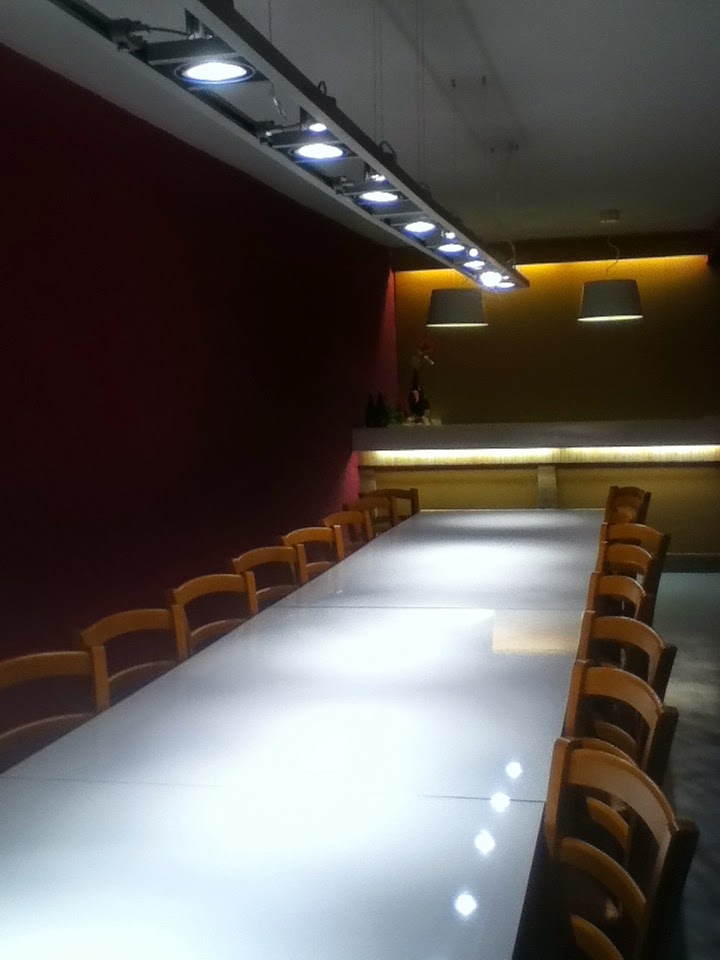 Once we had been through the museum and heard all about how the business had changed over the years, Xavi took us through some of the other basement rooms. This is where he has really started some exciting things.
There was a cool, contemporary basement room with vivid pink walls which housed a bar and long table. As you would expect, Cal Feru host the usual variety of hosted tastings and nights where the wines are matched with food, all with full explanations – usually from an expert in the field. We were upset that the day we flew in to Barcelona was the day that they had a food and wine matching afternoon on a sailboat, but maybe that will be for another time.
For me, the most interesting events that they run are their evenings pairing music and wine. There was a very clever play on words about ‘canciones’ (the Spanish word for songs) and something to do with wine which sadly I can no longer remember, even though I tried to make a mental note of it! But they have evening sessions with smooth music for a smooth wine, or matching mellow, bright, vibrant and other flavour notes with the songs that they hear from that evening’s artists. I think they run these about once a month so definitely worth checking out if that is available during your visit. 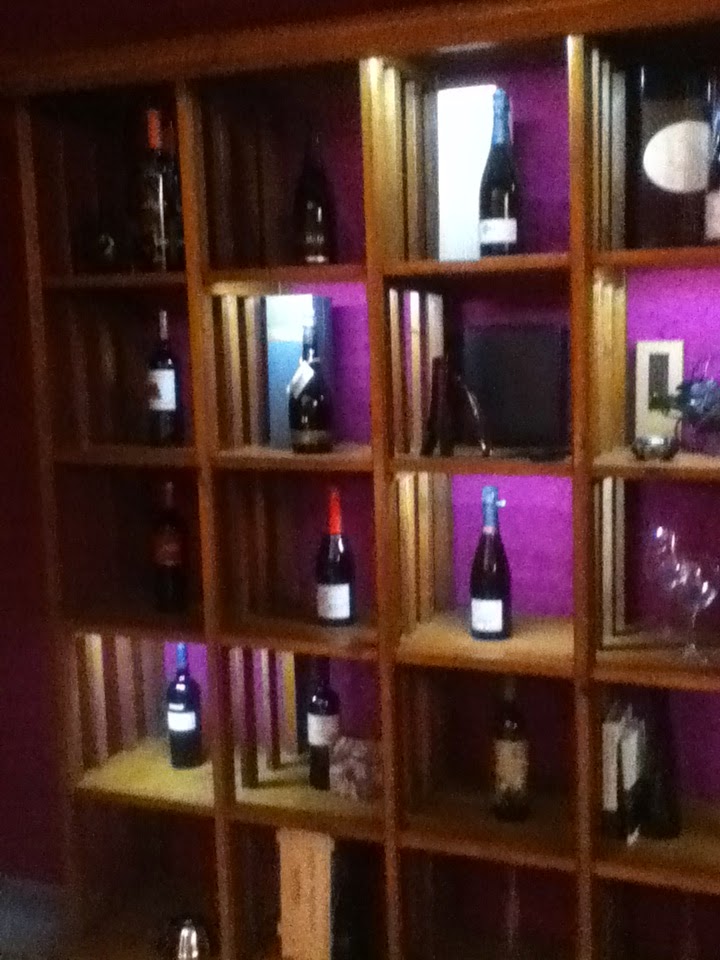 They had the best autograph book you’ve ever seen because of these evenings – the specially selected wines matched with the corresponding CDs from the respective bands, all signed on the night. And presented in a lovely cabinet – it looked great.
At this point, it would have been rude not to actually taste the wines! The tasting room is on the first floor and has only been open for about a month, so we really had our finger on the pulse. Following a trip to California, Xavier wanted to recreate the laid back tasting rooms that he had experienced (and of course we love visiting). The room itself has a range of comfortable furniture with a tasteful display of wine related products all around. They offer a number of tasting sessions, including an Introduction to Cava, which I would highly recommend if it is not something you are familiar with. 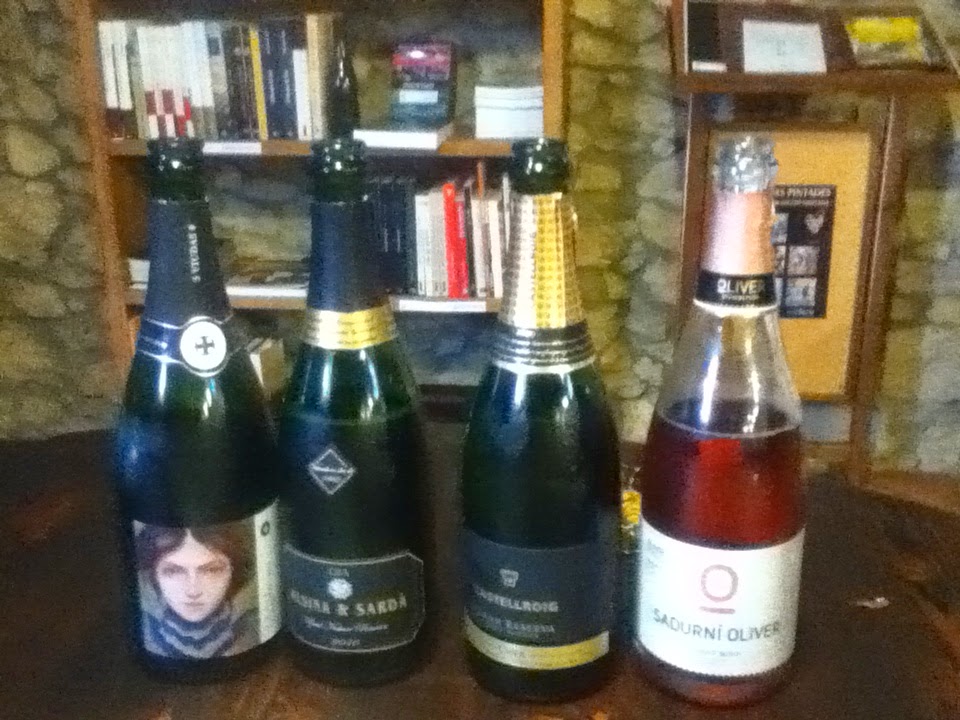 We were lucky enough to try a wide range of cavas with Xavi, it was lovely that he really got into the tasting with us, instead of simply acting as a guide – you could tell how much he loves his work! Later in the tasting he brought us a selection of tapas, including the most delicious charcuterie that is also made in the local area. Sadly we were unable to find any in the shops around the town so were not able to bring any home with us. That worked in amazing complement with the cavas, which actually quite surprised me, but here in the Capital of Cava it is apparently quite usual to take your cava with food as you would with any non-sparkling wine. With so many wineries around I am not surprised in the slightest. Anyway, more on that later – bring on the Caves!
ALSINA SARDA Nature
Reserva 2010
Although Cava is a protected name, sadly it is not geographically delineated in the way that a rioja is. The protected appelation was created in 1991 and it seems a shame that the region isn’t protected given that 75% of cava is made in the area, but all cava makers in Spain are covered by the protection. However, you do get some assurance of quality from the associated labelling. A reserva has a green label on the top and will have been aged in the bottle for a minumum of 15 months. A gran reserva has a black label and has been aged for at least 30 months.
At EUR6.50 per bottle, this stuff is easy on the pocket and surprisingly palatable. Light on the nose, it smells both floral and young (as indeed it is). It is a Brut (dry) natura and you can really taste this – this is clearly a matter of great pride in Sant Sadurni. A semi-brut will have more sugar added after the first fermentation. This is totally dry. This has a pleasant light fizz in the mouth and a citrus taste, once I went back to it I thought I was getting just a hint of a melon like taste, but the aftertaste is not so great – almost sour – this is the young nature of the cava coming through.
This cava is made from typical grapes – Macabeau, Xarel-lo and Parellada. It is aged for 20-30 months.
I was interested in that every bottle of cava pours differently, so don’t bother taking note of how the bubbles look in the glass, it’s just the mouthfeel that matters.
CASTELLROIG Gran Reserva
Gran Reserva 2009
From a great, reputable winery, this has a noticeably deeper, more complex flavour than the reserva. It is almost creamy in the mouth, but without this detracting at all from the dryness. The Xarel-lo and Macabeau grape combination really suits the longer aging of the gran reserva and this shows itself in a better mouthfeel and much smoother, more pleasant aftertaste. This is an all round super cava and sells for EUR14.65 at Cal Feru.
The grapes are mainly produced locally too, with the region being surrounded by mountains and the hot temperatures being balanced out by an afternoon breeze from the sea which helps to cool the vines. The hot temperatures also mean good red grapes are produced there, which serves to create excellent rose cava using the Priorat grape.
SEGURA VIUDAS 5 viudas # Brut
Reserva 2010
Made from a heady mix of Macabeu, Parellada, Chardonnay and Pinot Noir, this ‘Widow’ cava sells for EUR 7.25 a bottle, and this extra few cents makes all the difference. It has much more fruit than the Alsina Sarda and therefore reflects a more modern style of cava making. It has less bubbles on the tongue and so is less satisfying in that respect, but more acidity, with light citrus notes. A nice spot for the price, but a less traditional cava taste than you would expect.
SADURNI OLIVER Rosat
Reserva
At this point we went on to the rose cava, and this one had a deep colour in the bottle which poured almost to a look of strawberries in the glass. This was appropriate, as it had a strong amount of juicy soft fruit on the nose, but was not overly sweet or heavy on the palette – again the local preference for a dry, Brut taste being preferred. It had no real floral notes, but was as you would expect more fruity than the white cavas. There was less of a feel of bubbles on the tongue than all the previous offerings, it definitely felt less fizzy. This is made solely from Pinot Noir which I think explains the flavour. 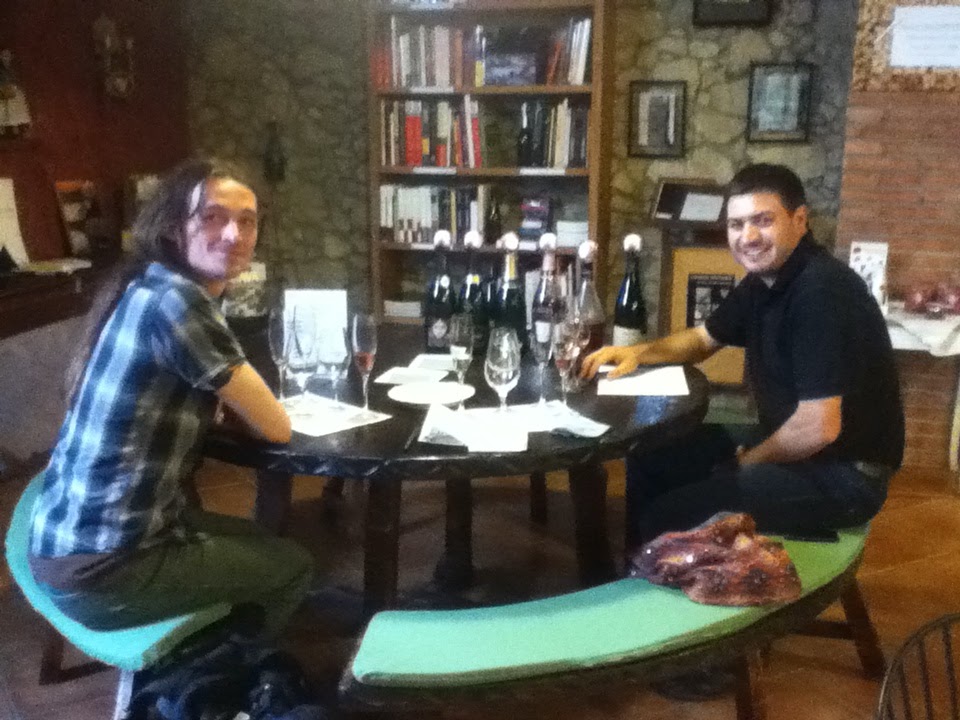 RECAREDO Brut de Brut Brut Nature
Gran Reserva 2005
Definitely the best of the bunch for me and at EUR26.85 per bottle, surprisingly affordable for something of such high quality. Featuring Xarel-lo, which is first barrel conditioned and Macabeu, there is very little on the nose, perhaps just the merest hint of yeast or citrus, but not much at all. There is  definite deep complex flavour, which the flavour of that first barrel conditioning really penetrates. It also has a delicate fizz which is pleasant on the tongue and it is so dry (the Brut of the Brut, as the name indicates!) that it almost takes on a savoury characteristic. Barely any fruit is present and for this reason it was a truly heavenly match with the salty charcuterie and soft, crumbly olive and tomato biscuit/cakes that we were offered.
MARIA CASANOVA Glaç
Rosat Brut Nature
This is a young, fruity rose with a raspberry sweet. It still has a touch of the dry, giving an apple like crispness – however the bottle we had had been open for a week and it had really lost a lot of its edge – you win some, you lose some…
So an absolutely wonderful couple of hours were had at Cal Feru. I’d recommend you go along just to meet Xavi – we felt like we were old friends almost immediately, he truly puts you at your ease and he knows his stuff. Get down there.