We picked up a couple of Tesco Creamy Herb Pasta from Tesco’s ‘Deli Salad’ range from the reduced aisle the other day, in the interests of research for the Campaign for Real Salad (don’t forget to sign the petition!) Since writing about the Great Product Labelling Swindle six months ago, I thought the situation might be getting better with these pre-packaged deli salads, but not so!

I took one of these salads to work, with a tub of salad leaves to accompany it, since it has no vegetable content (apart from oregano and garlic puree, if you think that counts). It was very heavy, sauce laden and extremely rich. I also felt there was too much vinegar, but that’s probably just my palette, I’m not in to vinegar. There was, as I have observed previously with these packaged pasta salads, way too much sauce. I think you could comfortably reduce the amount of dressing by 75% and still get the same flavour but significantly more enjoyment. I spent the whole meal trying to wipe excess sauce from the pasta before I ate it, as you can see from my plate. About half way through I was absolutely full of it, and feeling a bit sick because there was so much fatty sauce.

And not eating too much of this ‘deli salad’ is definitely the best way to go. Looking at the ingredients list, you can see that the cooked pasta composes 50% of the total, so this pot is 160g, 50% dressing. It’s not indulgent and delicious as you might expect. It’s greasy and overwhelming. Even the Boy felt sick after trying to eat some.

Further to this, Tesco have now reverted to their old trick of labelling the dish with 100g and ‘heaped tablespoon’ quantities. On the actual packet, it doesn’t tell you how much is in a heaped tablespoon, but happily at least it is mentioned on the website as 50g. That means there are just over 6 servings per pot perhaps?

The nutritional info of this item is truly shocking. 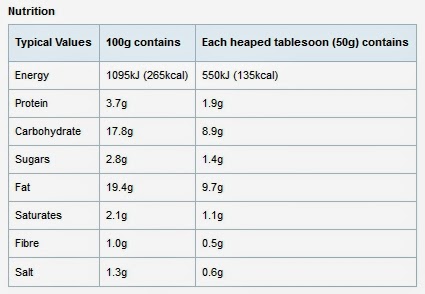 At 310g per tub, that means if you (with amazing superhuman powers) manage to eat the whole, single-serving sized tub without vomiting forcibly and copiously, you will have consumed 810 calories and a staggering 60.14g of fat. That’s 86% of you daily recommended 70g fat intake.

Awesome, thanks Tesco. What a great meal option this is. Even if you just eat one heaped tablespoon of this pasta salad you will have had only fractionally less fat and calories than eating an entire Cadbury’s Flake (170 calories and 9.9g fat). And received about the same nutritional value given that neither have any vegetable, fruit or general goodness in them whatsoever.

If you think this is stupid, sign the petition, comment below and generally kick up a fuss. Let’s get our office lunchtimes back on an even keel.