My bubble bath as choice as a young ‘un was always Matey, so it caused a great deal of nostalgia when they sent me one of their limited edition bathtime books to have a look at. I seem to remember I was quite jealous of friends who had a character on their bubble bath, until one day my mum got me one of the talcum powders with a ghost character on it and I thought it was ace. Easily pleased, but there’s nothing wrong with that.

But enough about my memories of bathtimes gone by. According to Matey, 60% of parents believe bathtime is one of the most important times of day where they bond with their children, but a quarter of parents sadly don’t make it home from work in time to enjoy it. Also, the research revealed that bathtime can be stressful, with worries of tantrums, baths that are too hot, or bath water being generally inhaled, ingested and otherwise taken on board by the little mites. 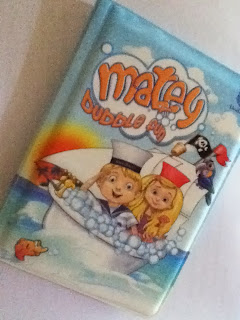 This is why they decided to produce a bathtime book to make the experience more chilled, enjoyable and relaxed for everyone involved. Written by mum of two, Emma Greaves, the book features the Matey characters Max, Molly and Peg Leg. A limited edition run of these hard wearing yet foamy and soft books has been produced . 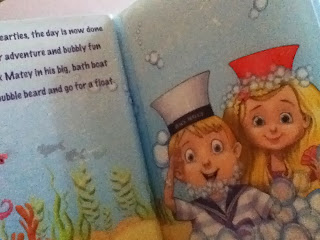 I passed the book on to a friend with a three year old to road test and they told me that it had become a regular part of the bathtime routine in their house. Waterproof, but colourful and interesting the simple poem narrative held the children’s attention and the illustrations stimulated further discussion and enjoyment. All in all, a great success and rated an impressive 9 out of 10 Mummy Points!

The books have been released at a recommended retail price of £2.37 (so you might be able to pick them up for even less!) and are available from Asda and pharmacies. At that price these are super cute little stocking fillers that will become a regular addition to your little ones ablutions.