I thought it was time the Campaign For Real Salad hit international waters and made a comparison of the UK Chicken Caesar Salad with it’s American counterpart. I picked the Ready Pac Foods Bistro Chicken Caesar Salad 6.25oz which is available at Walmart, although I do not know the price as the fresh produce is not available via there website.

On first glance, I was pretty impressed with the nutritional information that was available on the website. It looked clear and easy to understand. 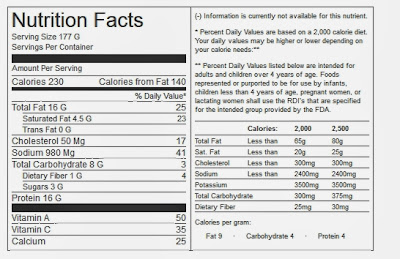 Then I realised that Walmart too are doing the cheeky thing of making their labelling confusing so that it is hard for customers to easily check what they are eating. The product is advertised by weight in ounces, but the serving size is given in grams. Now in this case it doesn’t really matter because the product is single serve, but they do offer a lot of salads which serve up to four people, so this could be really hard for people to portion up correctly. The same way that Brits really don’t get ounces as a measurement for drinks or pre-packed products, I’m pretty sure Americans are not au fait with grams. 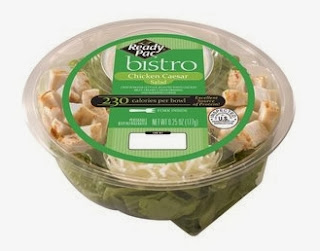 So, the comparator. How do our American cousins fare when it comes to the great Campaign For Real Salad dressing overkill issue? Well, according to my previous calculations, Tesco’s Caesar Salad offers 190kcals, 3.9g sugar, 14.5g fat and 2.3g sat fat per 144g serving. Walmart-owned Asda’s 108g serving has 196kcals and 15.5g of fat while Sainsbury’s full fat take on this salad was 223kcals, 3g of sugar, an eye watering 17.6g of fat of which 2.4g is saturated fat per 133 grams. The Ready Pac version contains 230g calories, 16g of fat of which 4.5g is saturated fat. If we work these figures out per gram then we’ll get a level playing field for comparison:

Interestingly, the Walmart version is therefore the healthiest out of all those compared, just about – Americans are getting a larger portion size, but slightly healthier ceasar salad than the Brits, but overall we’re all getting around 200 calories or more and an average 16.1g fat per bowl of salad. This remains too much. I thought it was really interesting that the Walmart version highlights its 230 calorie content on the packaging as an enticement to portray it as a ‘healthy choice’ – I do not consider 230 calories to be appropriate for a salad and neither should you. The packaging is tellingly silent about the fat content as well.

To put these stats in context, a hamburger from McDonalds, according to their US website nutritional information, contains 250 calories and 9g of fat. That’s 20 calories more than the salad, but 7 grams of fat less. The salad contains 78% more fat than a hamburger. If you think this is wrong, then sign and share the petition to support the Campaign For Real Salad.