The Campaign for Real Salad

I am starting a campaign. It’s been bubbling below the surface for some time now, but now I’m so frustrated that I need to get it out there and try to make a change.

I believe that supermarkets are mis-selling salad. You know how it goes, sometimes you just need to grab something while you are out and about, or at work, or whatever. And if you’re anything like me, you think “I want something that’s not too expensive, but reasonably healthy.” You could go to the local 2 for 1 pub, or get a meal deal in the cafe but instead you think I’ll nip to Tesco and grab a pre-packed salad. Convenient, fresh, what could be better?

Which is why I am so disappointed that the vast majority of pre-packed salads are simply unecessarily full of fat and calories.

Take, for example, the Tesco Complete Egg and Cress Salad. At £2.00 it’s not overly expensive. You get a good amount of salad in it, certainly enough to fill you up, not to mention the protein you get from the egg. I also had half a bread roll with mine, because a. I’m a carb addict and b. I didn’t see the harm a bit of bread could do in addition to a healthy salad.

I opened the pack and that’s when I saw it, the mayonnaise. Now I love a salad dressing as much as the next person, livening the flavours up and keeping the palette interested. I see the role in the world for salad dressing. My problem was that there was just so much of it. I put more than enough of the mayo on the salad to coat all the leaves, perhaps a little too much, and I had literally used about a fifth of the sachet of mayonnaise. Because I was at the office, there was nothing I could do with the rest, so it was thrown away, wasted.

“So what?” you may well be saying. Well this is so what – the nutritional information was thus:

Believe your eyes. That salad I picked up, that quick and easy option for a healthy lunch contained over a quarter of my recommended daily fat intake. Women should eat no more than 70g of fat per day, so you’re really eating way in to that recommendation here. If you’re trying to lose weight, you stand no chance.

And roughly how much of this is the dressing? Well, obviously the healthy boiled egg is providing the majority of the calorie and fat content besides the dressing and a small boiled egg (and the one in the Tesco salad is most definitely small) may be in the region of 57 calories and just under 4g of fat, with just over 1 gram of saturated fat. Which means that the mayonnaise must account for something in the order of 150 calories (leaving some account for the salad) and 15g of fat. Hopefully, because I only ate about 1/5 of the mayonnaise I only had 30 calories and 3g of fat – much more reasonable for my healthy salad.

Don’t forget I added bread as well, perhaps another 70-100 calories on top of the potential 220 already in that salad.

And this is my campaign. I realise that most people don’t bother to read the labels on their food – they are reliant on what should be the Bleedin’ Obvious that a salad is a healthy option and a burger isn’t. But this is not the case. I think people should be more savvy shoppers, but I also think that it would not be difficult to amend pre-packaged salads’ composition so that there is less dressing, less calories and less fat. After all, I’m asking for less of the expensive ingredient to be added! It’d be nice if the price went down commensurately, but I’m not an idiot, I know how supermarkets work. 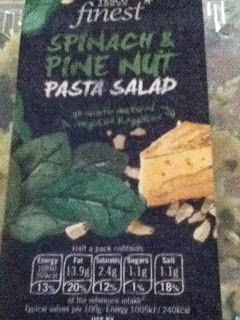 Yesterday, I had a Tesco FinestSpinach and Pine Nut Pasta Salad. Currently on offer, at the time of writing, at 2 for £3.50, to encourage you to buy more. Now, I am under no illusions that this was not the best choice of ‘salad’. The spinach content was low, and the other ingredients were pasta (carbs), pine nuts and cheese (fat) all coated in a pesto dressing (essentially olive oil).

Here is the packet. You’ll notice (despite my blurry photo) that the nutritional information is given by ‘half a pack’. Well, this salad is 215g, provided in a convenient bowl shaped pack. And, having eaten one, frankly you need to eat it all to yourself. I ate mine at midday and I was ravenous again by 4pm, so it’s not really a big comforting filler.

The website gives the nutritional information in a slightly easier to read format, so here it is:

Bear in mind that this is the same nutritional information as on the packet, but the website simply tells you that this information is ‘per serving’ without clarifying that they have deemed a ‘serving’ to be half the packet.

That means that if you eat the whole thing, you take in 520 calories (26% RDA) and 28g of fat (40% RDA). According to Pizza Hut, I could have had two thirds of their small Italian margherita instead for 460 calories and 17.2g of fat. Hell, for an additional 170 calories, but still 2.2g fat less than the salad, I could have the whole pizza!

Now I’ve admitted that pasta salads are not the best choice, but surely they should be significantly healthy compared to a fast food pizza. What could supermarkets do to make this product healthier? Ladies and gentlemen, brace yourselves for exhibit A:

Yes, because I did not stir up my salad, indeed I actively tried to drain it as I ate, I was left with 2 or 3 teaspoons of olive oil in the bottom of the container when I had finished. Once again there is too much dressing. And instead of putting less dressing in, Tesco have just fiddled the nutritional information to make the product appear slightly healthier. The Boy was disgusted when he saw this as he realised he’d clearly just eaten all of that unnecessary fat. As I suspected, he hadn’t thought (and hadn’t read the packet) to discover just what he was ingesting.

I believe supermarkets should use less dressing. Nobody needs an oil slick of olive oil, or an egg salad that is literally dripping in mayonnaise. It is too much. It doesn’t taste good. And it lulls people into a false sense of security that they are eating well when they are not.

I believe supermarkets should not manipulate nutritional information. If a product is unhealthy, make it clear. Let us know the facts so we can make informed decisions.

If you agree with me, you can sign up to my Campaign For Real Salad petition on Change.org.

Tesco salads are the only ones I have featured so far, but I have no doubt that there are other culprits out there. What salads are in your fridge and how much is the additional dressing adding to your waistline?