My holiday postcard of my favourite holiday moment would have to be from Spring 2009 when we ‘accidentally’ went to Chile and Argentina before getting back on our itinerary in Peru.

Picture the scene – swine flu was spreading and we were due to spend three weeks in Mexico City and the surrounding area as part of a round the world trip. The time to move on to Mexico approached and things looked more and more hopeless.

“Don’t come,” our friend in Mexico City facebooked us two days before we were due to fly over from Singapore. “Everything is closed – bars, museums, schools – everything.”

What were we to do? We spoke to the airline and they advised to carry the journey through, but just not to stay in Mexico and get the first flight off to Lima, Peru. That way we wouldn’t incur any penalties with the flights. It seemed reasonable advice, and so we proceeded on with our journey.

Things started to get a little hairy when we got to Tokyo airport and we were filmed by the local TV channels for being in the check in clue for the last flight out from Japan to Mexico for a while. We started to think that perhaps going to Mexico City was not a good idea.

We arrived and the airport was at a standstill. Contrary to what the airline had told us about their own flights, there was no connection for us. Peru had shut its borders to flights from Mexico already. And so had Ecuador, our next planned stop. Was this the end for the Mojo Brigade: Ultimate Global Division? Would we have to give up the ghost and head back to the UK?

We sat around the airport and waited, desperate for another option. In that time we attracted a group of like minded people – English speakers from all around the globe – English, Canadians, Americans and Australians. We were the Gringlish. All with Peru as our ultimate goal, we used our numbers and pooled our knowledge of Spanish to try and find a way forward. Many people were desperate to get to Cusco to make connections for expensive tours of Machu Picchu that they had booked. We were fortunate to have time on our side.

Then, after many hours waiting, a ray of light showed through the clouds. We could be flown to Santiago de Chile – and after that we’d be on our own. None of us knew the first thing about Chile, but it was in South America, and we’d be out of Mexico and safe from the pandemic so it seemed a chance worth taking. This was the point where I finally learned to let go of worry and go with the flow instead. This attitude has remained with me and I’m much less of a control freak as a result!

Ironically, the plane we were put on was used to ferry the last few Peruvian nationals out of Mexico, so we spent approximately 7 hours stuck on the plane at Lima airport, exactly where we wanted to go, but unable to leave! And then we arrived in Chile. A number of the Gringlish disbanded, buying tickets on to the next flight up to Lima (thankfully the terrible rumours that our April 2009 Mexico passport stamp would prevent us getting in to Peru at all proved untrue). But some of us remained and took a three week adventure through Chile, Argentinian wine country, cable cars, Peruvian road blockades and up to Cusco in time for our trip to Machu Picchu.

We had some of the best times on that trip. I spent a birthday with new friends we had picked up along the way, we shared a bottle of rum with local villagers when stranded for 17 hours in a protest against water privatisation in Peru. We spent the time in the comforting shadow of the Andean mountains and saw more goats dressed up in traditional dress than we thought possible. And best of all, we met our new best friend, a Californian who was only going to Peru for 3 weeks but ended up travelling with us for 5 and then going on to his own path afterwards. We have since been to California to see him get married. Who knew the swine flu pandemic would bring us such adventure and a new lifelong friend? 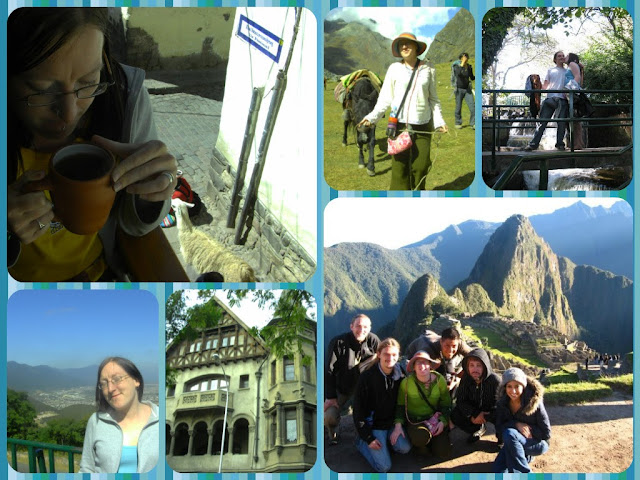 This is my entry into the Travel Supermarket Holiday Postcards Competition. I hope you enjoyed it and I hope I win, so we can go on another travel adventure!