Leicester foodies are feeling particularly blessed lately. Not only has the fast and funky Chilacas opened up in Leicester’s Highcross shopping centre, but now we have a new branch of American restaurant chain, Coast to Coast. They claim to use fabulous ingredients to produce authentic American food. 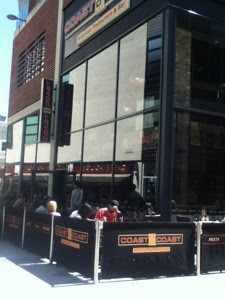 I started reading up on the chain when I saw they were opening up premises recently. Luckily for me, I stumbled upon a competition for a table for 4 for their launch night while I was doing my research for this review and – blow me! – I only went and won! So as well as being given the opportunity to review we also were given the full VIP treatment on the special opening evening. I decided to combine the two so that I could review both the evening menu and the lunch menu, give you all a really rounded perspective of what Coast to Coast has on offer.
On the VIP evening, we started with a cocktail each. I had the red berry cheesecake… 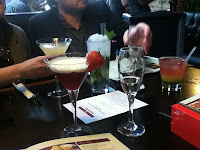 Eristoff vodka, Chambord, Fraise liqueur, Amaretto and strawberry purée.
Shaken and topped with cream and a fresh strawberry for the ultimate indulgence.
It was a pretty nice flavour, but the berry layer curdled the cream when they mixed, so I wouldn’t advise leaving it too long – drink it quick!! 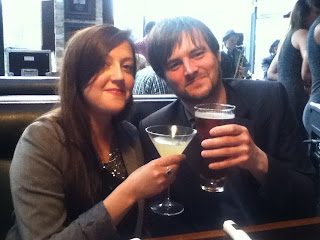 Overall though, we were all pleased with our cocktails – they went down nicely after our complimentary glass of Prosecco upon arrival. Oh yes, we were being very well looked after! That’s definitely the thing to mention, during both our visits we found that the staff were extremely attentive to our every need – checking we had everything we needed and happily accommodated any special menu requests. I would say that Coast to Coast in Leicester provides the best quality service in the city at the moment, even compared to Bistro Pierre, which I love!
For our starter we shared the Giant Lincoln Platter – at £15.95 this is relatively reasonable shared between 4, but you do just get one of each thing. There was a chicken wing, fried chicken strip, loaded potato skin, onion rings, ciabatta stack and nachos. It was OK – everything was well cooked and the blue cheese accompaniment sauce was tasty. 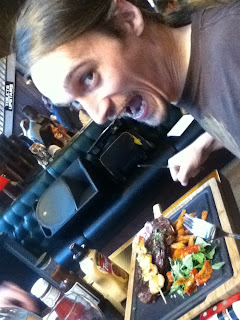 For mains, all of the party got steaks apart from me. The Boy got the 14oz ribeye – at an eye watering £29.95 – I’m glad it was complimentary!! He also got the additional prawn skewer, which would have cost £3.95. He really enjoyed it and didn’t find it overly big, although I noticed a bit of a food baby afterwards!! I tried one of the prawns and thought they were really well cooked – moist and juicy. Everything was made with nice, high quality ingredients. The home made coleslaw was one of the highlights. 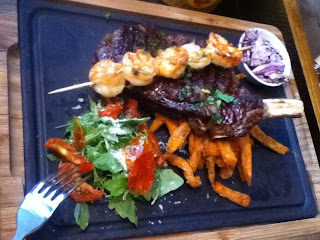 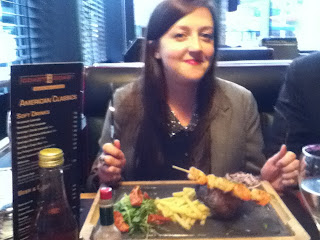 I ordered the pulled pork fajitas with a side of macaroni and cheese. The mac n cheese was tasty, but didn’t really taste like the American counterpart. It didn’t have a decent thick creamy sauce, but did have a lot of cheese on top which sort of made up for it. 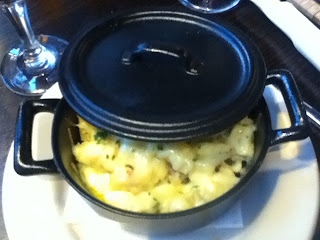 The pulled pork came in a BBQ sauce which was a little too vinegary for my taste, but the pork itself was tasty. I would have preferred the sauce to come separately so you could just enjoy the pulled pork on its own if you preferred. 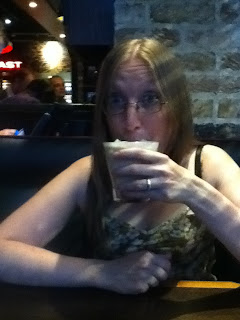 For our desserts, three of us got White Russians, which were tasty but had way too much ice in them. Throughout the meal we found that things were tasty and good quality, but perhaps just a little overpriced. The Boy summed it up best by saying if everything on the menu was a pound cheaper, or you were given real American portion sizes then the value for money would be a lot better! 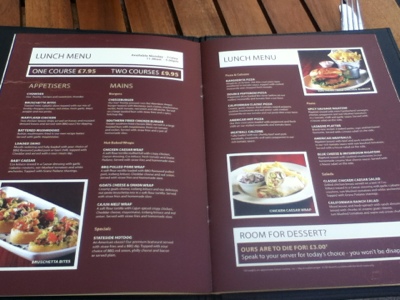 I also found this to be the case with the lunch menu. Upon checking with the waitress I found, as you would expect, that the lunch portions are slightly smaller than those of the evening menu. Between 12pm and 5pm you can get selected meals at £7.95 for one course, £9.95 for two and then a dessert on top for £3.00.

We enjoyed some American beers that we enjoyed in California this Spring – a pint of Blue Moon (the girl’s beer as I remember) and Samuel Adams (which is better in bottles, for reference). The Boy tried the Jeremiah Weed drinks for the first time, the Sour Mash and the Root Beer, both of which he enjoyed but are a bit like pop apparently, maybe sink down a little too quickly. 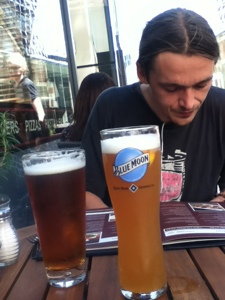 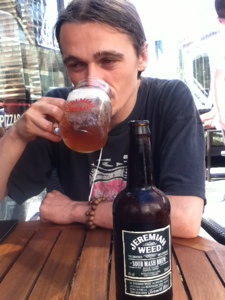 For starters I had potato skins with beef chilli from the lunch menu. It was tasty – the chilli was flavourful and the skins crispy around the edges, but I thought just two skins was a little bit of a mean portion! 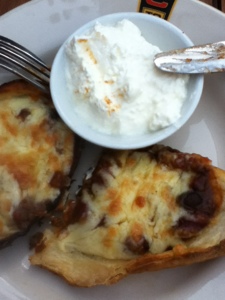 The Boy had hot wings off the Appetisers section of the main menu. He absolutely fell in love with these in California and so has been keen to find somewhere that does a decent reproduction. These weren’t bad approximations of their American cousins and at £6.55 a portion, they are about the same price you would expect to pay in the States. However, with just 5 wings per portion (well, they were actually little legs, not wings!!) the portion was a little too mean. The Boy was expecting to just have this for lunch and it to be satisfying, but it wasn’t quite enough for that. Another nice touch would have been to serve it with celery like the Americans do, although the blue cheese sauce was pretty spot on. 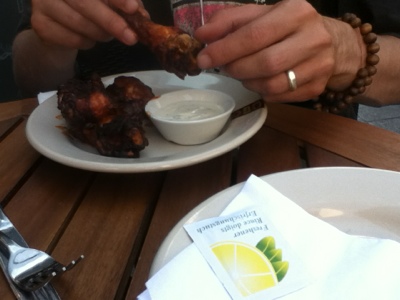 For my main I ordered a calzone from the lunch menu, which I had to split with The Boy because he was still hungry! This was by far the most disappointing dish we tried. The meatball and tomato sauce filling tasted really overly sweet and surprisingly like a tinned meatball in tomato sauce that you’d get from the supermarket at 35p a can!! Also the crimped dough around the edges was too thick and therefore uncooked in the centre. I also felt like it didn’t feel like a full meal – I would expect a side salad or something to come with it, not just a random splodge of tomato sauce over the top, which is what we received.

If you want to order calzone all I can say is go to Prezzo!! I found a picture of the Prezzo calzone on Trip Advisor for your viewing plasure so you can see the difference. The Prezzo item is much bigger, filled with a variety of high qualty, not too sweet ingredients and served with a neat jug of tomato sauce (freshly made with herbs and additional flavours) and a tasty dressed side salad – it’s really in the next league. For a normal meal, Prezzo’s calzone will set you back £10.95, and at C2C it costs exactly the same on the regular, non-lunch menu…

Since it was a review meal, I thought you’d want to see a pretty picture of a pudding. Sadly, The Boy remains unable to take a nice picture of me eating a dessert, so here I am looking windswept with my Eton Mess. 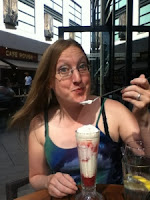 This was an additional £3 on the lunch menu and was delicious, as you would expect. My only criticisms would be that Eton Mess is not the slightest bit American, and there was barely any meringue in it, which is pretty much the main ingredient in Eton Mess! Still, it tasted great and was light enough to not feel too much after the rest of the meal.
So, in summary, I would give Coast 2 Coast 7.5 out of 10 Extreme Points. The customer service is absolutely fabulous – the staff are motivated, friendly and clearly committed to providing a great dining experience. The restaurant itself looks great – it’s a fun place to hang out with its booths and baseball on the TV behind the bar. They have a great range of drinks which are tasty, if fractionally too expensive. Finally, the vast majority of the menu is made with quality ingredients and tastes really nice. The trouble is that it isn’t particularly American (but then we only know about California…) and that everything is about a pound more than you’d realistically want to pay for it. And if you want a calzone, go somewhere else.
So, if you don’t mind paying a little more, definitely give this place a go, if only to get that warm glow that only really good, friendly service can provide.
We were given a voucher to cover the cost of the review meal (but we went £3 over, which we paid ourselves!) and our attendance at the VIP night was courtesy of Gem 106. My opinions are all my own and I was not paid for this review.