Edit: May 2015 – Sadly Chilacas Highcross has closed down. We were regular visitors over the two years it was open and we are sad to see it go. 🙁
There’s a new kid on the block at Leicester’s Highcross shopping centre and that is Chilacas, the Mexican street food joint. Watching it pop up, I was really interested to try their food and so I was very pleased to be invited down to give them a bit of a taste test. 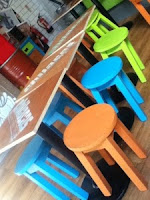 There was already a Chilacas at Birmingham, but I have to confess, we’d never been. We don’t spend that much time in Brum except for passing though New Street on the way to somewhere else, so it was cool to have a completely novel food place opening up in town. 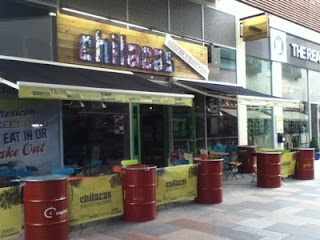 Our first impression was really good. It’s bright and colourful and the terrace area has been kept scrupulously clean. I really liked the oil drum tables for al fresco dining and the bright colours of the tables and chairs. With the weather being pretty good today, the front doors were open and the catchy latino music was spilling out, which was really enticing for me.
They’ve kept the fun and colourful decor and atmosphere going inside the restaurant, which isn’t particularly Mexican, but does provide a nice light hearted atmosphere, so you’ll hear no complaints from me! 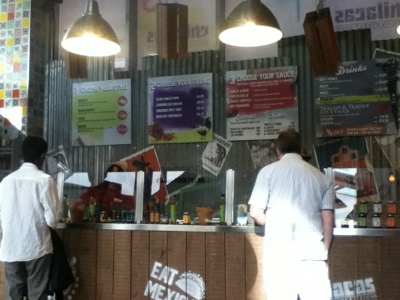 As you would expect from true street food (which this isn’t, because it’s a shop!) the menu is limited but from what we saw every aspect of the menu is well done. You work down the line, picking the elements of your meal – starting with either a burrito, naked burrito, tacos or nachos and then adding your choice of meat or vegetable, sauce of varying piquancy, followed by sour cream, cheese, salsa and maybe a touch of guac or a sprinkling of jalapenos. You can also get a serve of tortilla chips to accompany your meal. And that’s it! Play around with the flavour combinations, have some fun!
They also have a simple, but pragmatic drinks menu – soft drinks (including bottomless fountain drinks), Mexican beers, wine and a choice of teapot or teacup cocktails. Oh, and tequila. But at 6.30pm on a Monday we thought we’d give the tequila a miss.
On the whole, we found the food to be really enjoyable for the price. Each of the options is priced up according to which meat (or roast veg) you order. Basically, you will get a meal for around a fiver. I had a pulled style pork burrito which contained rice, black eyed beans, roasted veg, pork, guacamole, sour cream, cheese and pico de gallo, a mildly spiced sauce. The overall flavour was really good. Served in the little American style red plastic basket and wrapped in tin foil I was transported back to California. The burrito was an excellent size and the pork itself was moist and tender. It really fell apart as you ate it and bolstered by the other flavours, particularly the guacamole, it was a really enjoyable eat.
In terms of criticsms, I think that there was perhaps a little too much rice and not quite enough cheese for my taste. Also, I would expect more than just a smear of guacamole when paying 75p for it as an extra. Perhaps a side tub of guacamole would be better? Also I found the pico de gallo to be either a little bland, or I didn’t have enough, because the rice was quite plain along one side of the burrito and no sauce had seeped in to it to flavour it, as I would expect. Perhaps it was also because the beans are not frijoles refritos and so do not have that delicious black gooey coating and seasoning quality which I always hope for from black beans! However, I am being very picky here. I genuinely enjoyed my burrito and was comfortably full after finishing it. 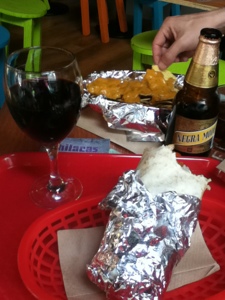 We also shared a portion of nachos with cheese sauce. The cheese sauce was spicier than the pico de gallo, whch amused me. They were just shop bought nachos, not tortillas fried on site, which I think I would have preferred, but still a pretty typical Mexican/Mexicali accompaniment, particularly when eaten with the Modela Negra beer!
The Boy had the spicy beef burrito with the chipotle sauce and jalapenos. I asked if the chipotle sauce was nice and smokey, but he said he couldn’t really taste it with the spicy beef and chillis – the eternal problem of the vast amount of ingredients in a burrito, you simply can’t taste everything!
We really liked the laid back atmosphere at Chilacas. The staff were extremely friendly and genuinely seemed to be enjoying their work. They were happy to have a chat with us and the other customers that popped by while we were there. It was quiet, but steady while we were there, which I suppose is unsurprising for a Monday early evening, but I can’t help but think that as word spreads, especially with the good weather we are forecast for the next couple of weeks, this place might really take off. 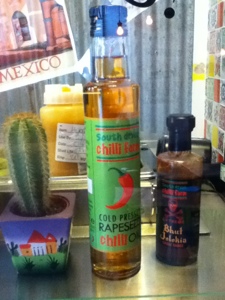 For chilli addicts, they do offer sauces available by the bottle to purchase – the Boy sampled the hottest ones for me and said it was a tasty hot sauce, but not at all unmanageable, so I think this is the place to go for flavour, rather than pointlessly over hot sauces.
Overall, I would happily give Chilacas an 8 out of 10. The food is really good – the basic elements e.g. the meat are spot on, and there are just small tweaks needed to the flavourfulness and proportions of the accompaniments given to make this a really excellent meal. It’s reasonably priced, it’s bountiful (one burrito would certainly make two work lunches!!) and it’s a fun and colourful place to hang out. We will definitely be back in the near future because the simple menu done well really appeals to us, as do the memories of California (not Mexico!) that Chilacas evokes!
You can find out more about Chilacas by following them on Facebook or Twitter. They’re worth following for their lovely friendly staff as much as the tasty food!