REVIEW and COMPETITION: Top of the Lake 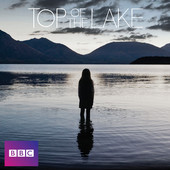 Top of the Lake is a co-produced miniseries, which will be released on BBC DVD from August 19th 2013. We were sent a review copy to watch and have literally just blown our entire afternoon going through the
entire thing!

We watched the first episode and weren’t really sure. There was clearly a lot going on and the potential for some complex characters and interesting plot twists, but it was a little confusing. But from the second episode onwards we were hooked. It’s unpredictable, complex and tense – a real edge of the seat drama that kept us guessing all the way through (admittedly we had guessed the grand finale by the fourth episode, but that didn’t spoil the fun, we just had to see how things panned out).

Unsurprisingly, this series has been written, produced and directed by a number of Oscar winners. Filmed and set against a breath taking New Zealand backdrop, Top of the Lake follows the story of Tui, a 12 year old girl who walks chest deep into a freezing lake. She is five months pregnant and will not speak of who the father is. Shortly after she disappears.

An inexperienced detective, Robin Griffin is brought from Sydney to investigate and she becomes increasingly obsessed with the search for Tui. And lots, lots more. There is the legend of the devil’s heart in the bottom of the lake, a rapidly expanding commune of displaced women in ‘Paradise’ property and midnight kayaking. Along with violence, repressed memories, death, illness, love, adultery, jealousy and despair.

I would highly recommend watching this, I would happily give it 9 out of 10 Extreme Points for a fascinating plot, nail biting drama and fantastic acting. And, because I am so pleased to recommend Top of the Lake to you I would also like to offer you the opportunity to win a copy of the DVD for your very own! Just follow the instructions on the Rafflecopter below. And if you aren’t a lucky winner, you can get the DVD or blu-ray from Amazon or iTunes.

Giveaway open to UK residents only.

Ray Mears Extreme Housewifery is not responsible for safe delivery of the prize – the prize will be sent to winners directly from the PR company.
The winner will be selected at random from all valid Rafflecopter entries.