It’s been a great summer for British sport so far. Andy Murray has reigned victorious over Wimbledon and everyone’s so excited they’re now clamoring for him to be knighted. The British and Irish Lions defeated Australia n the rugby and soon it will be time for England to take on Australia once again in the greatest grudge match for the smallest trophy, the Ashes.

I must confess that in recent years I have not sat back and enjoyed watching the Ashes as cricket is not the Boy’s favourite. However, it was something I really used to enjoy and is perfect viewing in the gorgeous weather we’ve been experiencing at the moment.

And now Coral has decided to help enhance your summer of cricket even further. 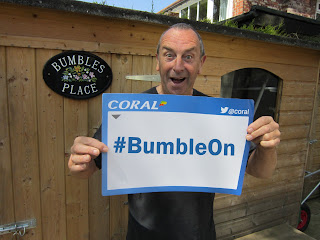 They’ve made a load of videos with cricketing legend David ‘Bumble’ Lloyd, about cricket, The Ashes and much, much more.  Check out all the films on topics from The Ashes and Wayne Rooney to Strictly Come Dancing on Coral’s YouTube channel. You can follow David’s progress throughout the summer on Twitter at #Bumbleon. I am loving his take on that traditional British summer sporting pastime, sledging.

Coral are giving me the chance to have a little flutter on the outcome of the Ashes and they are also offering five of you lovely readers the chance to win a free £5 bet to on the outcome for yourself! Who’s your free money on? After the summer we’ve had so far, I don’t think I could do anything but support England – let’s complete this great British summer of sport (the Olympics was so 2012). To enter the competition, just complete the Rafflecopter below!