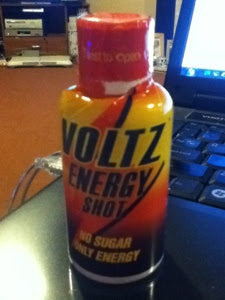 I tested the Voltz Energy Shot today! It was quite an interesting experience, mainly because I didn’t really expect it to do anything, so I was surprised with the results.

The product is a small, 60ml container of a berry flavour high caffeine shot with amino acids and vitamins that is supposed to give you rapid energy that lasts for hours. It is only 3 calories, so no harm in trying it, although the packet does say that results vary – hence my skepticism in trying it!

I decided to do a control week and then compare the results this week. So, last Tuesday and today I have cycled to work, done a full day’s work, cycled to the gym, done the 45 minute aerobics and tone class, followed immediately by a 30 minute aerobics class. Next I cycled home, then half an hour later went out to do a big shop. A busy day! On today’s test day, I drank the Voltz Energy Shot when I arrived at the gym, before my classes started.

The bottle is a little bit like a miniature shampoo bottle, so the neck isn’t very effective for drinking from, you have to take quite tiny sips. The berry flavour is very synthetic, as you would expect, quite like one of the powder sports drinks you get, but it’s not particularly unpleasant. Plus it’s small so it’s not a hardship to drink it all.

At first I didn’t really notice a difference, but 2/3 way through the first class I noticed that I was still putting 100% effort in, which I was quite pleased with. Then, when the second class began I got straight on with it, no internal dialogue about whether it was a good time to go home after all! As that class continued I again noticed I was again putting in a lot more effort than I normally would by that stage, clearly my energy levels were up.

On the cycle home, which is uphill a lot of the way, I stayed in a much higher gear than normal, even up the biggest hill, which I don’t think I’ve ever done before, let alone after so much other exercise. I got home and babbled a bit at The Boy, clearly still quite caffeinated, and then went to Tesco with no fuss. So in my opinion, I certainly got a good deal of extra energy that lasted a few hours. It is now around 6 hours since I drank the shot and while I am tired as it is my normal bed time, I am not experiencing any kind of crash or negativity. Which means I am really pleased with this product and would happily recommend it. I’d give it 9 out of 10 Extreme Points, purely because I’m not enamored with the flavour or the bottle!

I’m also testing the Voltz Rasberry Ketone at the moment, look out for that review soon. And in the meantime, if you’d like an exclusive 10% off Voltz products, just enter the code GK9GEQEMQ9 at their online shop. Don’t say I never give you anything!