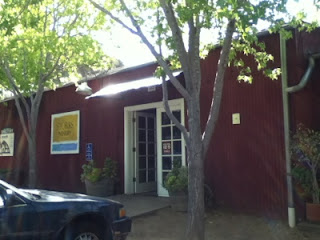 We visited the Storrs Winery tasting room in the Old Sash Mill on Potrero Street, Santa Cruz, CA. We took advantage of their $7 tasting (4.50 in pounds – where is the damn pound sign?). It is a small but neat tasting room, with some nice local art on the walls, as is de rigeur in Santa Cruz tasting rooms but do be warned they have no chairs so you will be stood throughout your tasting.

Our server was a friendly and welcoming young girl who had a friend in doing a tasting while we were there. She was knowledgeable about the wines on offer and made us feel welcome.

2011 Chardonnay
THe first wine was a creamy 2011 Chardonnay with the grapes being grown  in a series of vineyards in the Santa Cruz mountains. It was a lovely, extremely pale straw colour and had a floral and very sweet flavour. The 2010 retails for $24.00. 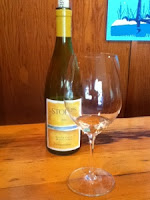 2010 Sauvignon blanc
Made from grapes grown at Monterey County, this wine retails for $18. We were both really taken aback by this wine because the overwhelming flavour is green pepper! That makes this a really crisp white, and I would imagine your guests would find it quite surprising. Lots of fun and something really different to anything I have tried before. 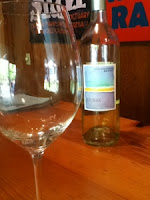 2009 Pinot Noir
Made with a blend of 8 different Pinot grapes, this wine is really light on the nose with hints of vanilla. It is a medium bodied flavour with a touch of strawberry fruit and extremely light acidity.  There is also a element of black pepper in the flavour, but not particularly strong. This is quite a typical pinot of the Santa Cruz mountain region.

2009 Grenache
By far the most disappointing wine I have tasted recently, this grenache was light bodied to the point of being almost watery in flavour. THere was a hint of black pepper and possibly even raspberry fruit, but overall the flavour was disappointing and unremarkable. There was no real punch or direction. One to avoid – although I should say that The Boy liked it more than I did so I guess it depends on your palette. 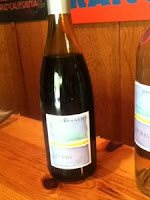 2010 Merlot San Ysidro
Grown south of Santa Cruz in an area we actually drove through a couple of days ago, where the artichoke fields spread out as far as the eye can see (12 for $1 – bargain). It has a fruity nose and the flavour is quite bright, soft fruit. There is a little taste of red apple in the finish which is very pleasant. The tasting notes described it has having a hint of granite. I have no idea what that means and the server was a bit confused by it as well #wankywinedescriptionalert. 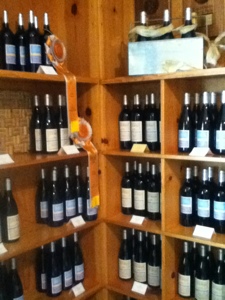 2009 Zinfandel
This $22 wine is pretty easy drinking. We don’t get a lot of red Zinfandel at home, so this is not particularly a flavour I am used to, although it’s definitely something I enjoy.Grown on the central coast, this wine has the typical jammy flavour of a Zin and is very full on the nose. It’s a really full, sweet flavour, luscious to the point of almost being sticky with plum and a smidge of apple flavour. In fact I felt it was sweet to the point of tasting almost like fruit sweets – gummy bears anyone?

2008 Petite Sirah
This is quite a full bodied rich and slightly savoury flavoured wine, with a ripe blackberry flavour that is rich and quite full on the tannins but still smooth with a low acidity for easy drinking. It has several months of oak barrel aging which shows in the flavour. A great example of the sorts of sunshiney, fresh wines you can get from the Santa Cruz mountains. 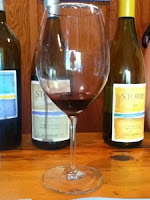 So a fair tasting overall. The wines were enjoyable (except the grenache) but none of them really blew me away. This winery is in a very different district to the large cluster of tasting rooms on the West side and this shows. Their $7 tasting fee is too much, especially when you will pretty much have to make a special journey out just to taste at Storrs. Personally, I’d be inclined not to bother and just head to Ingalls Street. A pleasant but ultimately disappointing 6 out of 10 Extreme Points for Storrs.

We went to Sones Cellars for a tasting today so look out for the review of that coming soon!