My last week of my 28 day trial of the Jenny Craig programme is now over. There are less photos of meals to post than other weeks due to there being more repetition this week. There are also some meals that I haven’t tried yet, due to eating out and what have you. I’ve got a few days worth of food left to have and if I remember to photograph it, I will post about it next week!
Sunday 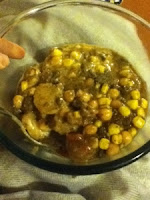 This was a porridge day. There was a lot of that this week. I was supposed to have sweet and sour noodles for lunch, but as I’m really not fussed on them, I swapped them out for the Mediterranean Tuna Pasta Salad and let the Boy have the noodles! Dinner was the Succulent Beef Casserole with Black Velvet Porter and Potatoes. I added some sweetcorn and chickpeas for my starch and a spoon of creme fraiche for a fat. It was a nice meal, although there weren’t really any decent sized pieces of beef and I couldn’t taste the Porter in the sauce. It was a nice, warming, savoury meal though. After this I finished the day off with a bag of JC crisps. 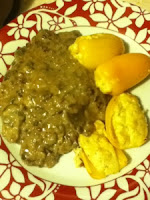 Monday
Monday was a chocolate wholewheat flake day followed by a portion of chorizo and mixed bean soup for lunch. All simple enough! For dinner, I made feta stuffed mini peppers, which you can read a little more about here. I served these with JC Mushroom Stroganoff, which tasted quite creamy, but was otherwise quite an unremarkable dish, with a slightly off putting murky grey colouring!

For my snacks on Monday I had a coffee with semi-skimmed milk (I usually drink black tea with a sweetner in so I don’t bother recording that) and a bag of JC crisps. 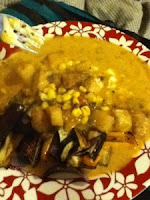 Tuesday
After another porridge start, I had a pot potato with rosemary and croutons with the remainder of my stuffed peppers for lunch. This was a very tasty meal, but I had no opportunity to take a photo because I was having lunch at a different office.

For dinner was yet another Chicken Chasseur packet, which I wasn’t really grumbling about as it is one of the nicest meals, if rather gloopy! I added aubergine, peppers, red onion which I roasted in the oven and also a tablespoon of sweetcorn which was languishing at the bottom of the tin and needed eating up. I also added some creme fraiche, even though I wasn’t really supposed to, because JC has made me a bit addicted to adding creme fraiche to any goop-based meal to make it taste creamier!!

I had a cereal bar for my snack and did a Zumba class in the evening, so my calorie count for the day overall was very low. 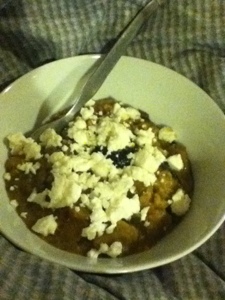 Wednesday
There was yet more porridge in the morning, and then I had to have lunch out at another site. I had a tuna sandwich with pesto and lettuce, some orange juice, grapes and strawberries, which I thought could probably have been a lot worse if I put my mind to it. Then I kind of messed up the whole day by going out with friends and drinking a few glasses of red. I managed to resist the cakes which I was repeatedly offered, although I did cave in and eat a few of my friends chips. When we got home, I got back on the JC, having the Thai Vegetable Curry with water chestnuts. The Boy made this for me and added aubergine and a sprinkling of feta on the top. It was actually rather a large sprinkling. So that wasn’t really a very good day diet-wise, but I did enjoy it! I had done quite a lot of cycling though. 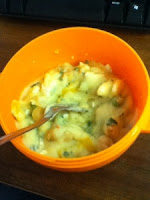 Yoghurt flakes for breakfast gave way to a pot potato with peas and carrots for lunch, to which I added chickpeas, chopped pepper and a sprinkle of feta. It was actually very delicious – I was feeling really hungry and I really enjoyed the meal. I think after my initial confusion at instant mash being considered a meal on JC, I have started to quite enjoy how nice and creamy it is. I might have to figure out how to recreate the flavour for an easy lunch without adding tonnes of dairy calories!!

I had a biscuit at work, an iced party ring, which I was delighted to discover was only 31 calories! I was pleased that I just had the one too… That evening, I joined a new gym. I’ve finished paying off my student loan now, so I’m using the spare cash that I will be getting each month for this. So, I went for a lovely swim in the evening and then cycled home. 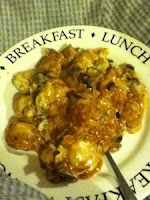 For dinner, I had the beef tortellini in tomato sauce which I had been looking forward to since I first opened the Jenny Craig food parcel up at the beginning! I added aubergine (I got 4 aubergine’s for £1 at the market at the beginning of the week, that’s why I’ve been having aubergine with everything!) and some creme fraiche and while it was not an unpleasant meal, it was sadly not everything I had been hoping for. It was perhaps a slight step up from the ‘tinned ravioli’ flavour of the lasagne, but not much. I think the pasta dishes are the real weakness of Jenny Craig for me, perhaps because pasta is one of my favourites I find it quite disappointing! It was a bag of crisps for my snack and that was that!

Friday
This was my real bad day this week. It started off well with JC porridge. However, then I was at an off site meeting with a rather delicious buffet. I had 2 little sausage type rolls, tuna mayo, chicken tikka and egg mini sandwiches, some Tyrrell’s crisps, and a rather tasty piece of Rocky Road cake. Ooops. That’s pretty much my day’s calories right there…

Then I got home and went to a friend’s leaving do, where I drank rather a lot (although not as much as I would have done in the past) of red wine, ate cake and ate yet more crisps. The Boy also gave me some of his homemade curry and rice when we got home because I hadn’t had any proper dinner. So that was pretty much a write off really. 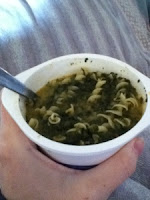 Saturday
Back on the wagon, with chocolate wholewheat flakes for breakfast and the JC Pasta in Cream Sauce for lunch. To this I added a couple of big tablespoons of tinned spinach, which made it difficult to stir and make up, but tasted great because it was spinach flavoured with a hint of a creamy sauce in the background. Most satisfying.

I was very good in the morning, as I had been to the gym and done a zumba class followed by half an hour swim (which of course I cycled to and from) so I was feeling very virtuous. For dinner, I again stuck to the programme and had the Lamb Hotpot with added aubergine and spinach and a dab of creme fraiche. I love those big tins of spinach, I put it in everything and everything comes out spinach flavoured. Which meant I have no real idea what the JC hotpot tastes like, it certainly couldn’t compete with all the veg I’d added. It was nice to have some pieces of potato in there though. All my meals for the next few days will be this slightly sludge green colour I think. 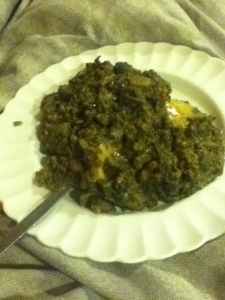 Because I’d been so good with my exercise in the morning, and because the Boy went out and had 4 pints after his rehearsal without inviting me, I decided I’d earned a small glass of wine in the evening. Conveniently forgetting all the crap I’d eaten on Friday, obviously. And so, it is no great surprise that I stood on the wii this morning and it told me I had stayed the same. Actually, there was a slight increase in my BMI, so I have put a little on despite all my hard exercise work. Serves me right.
Start weight: 9st 2lbs
Target weight: 8st 8lbs
This week: 0
Total loss: -6lb
Current weight: 8st 10lb
BMI: 22.43 (target 22)

Doing the Jenny Craig plan has been quite an interesting experience. It has definitely taught me quite a lot about where I was going wrong with portion size, but I’m not sure what else. I haven’t thought much of the consultations, but I think that’s because that kind of touchy feely American crap isn’t really up my street. I think for the quality of the food that you get and the amount of fresh veg, dairy etc. that you need to buy to supplement it, it doesn’t really represent particularly excellent value for money, however I really believe that if you follow the plan, it will work, so in that respect if you are willing to pay for results then it is worth it.