We were sent the Sunrise Pro Electronic Cigarette to test out from Paramount Zone. Paramount Zone is a great little gift website which has some lovely gift ideas on it to suit all budgets. I had a little browse around and found many things that I would like as well as lots of things that will be great for Christmas gifts. Personally I would really like the Advanced Sunrise Alarm Clock as winter really makes me sluggish and grouchy so something that would wake me up more naturally would be a bonus, particularly for £19.99 which is considerably cheaper than similar products I have seen before! Paramount Zone also has uber desireable goodies such as the Dali-esque Melting Clock, the walkie talkie watches and the sub-£40 massage chair… Well, Christmas is coming up – I might as well get my hints in now!!

As I quit smoking nearly a year ago (356 days in fact!) I wasn’t able to test this product, but the Boy is still going on the rollies and was more than happy to give it a go as I think he’s got bored with the whole smoking thing too, particularly since I am not sharing it with him anymore! 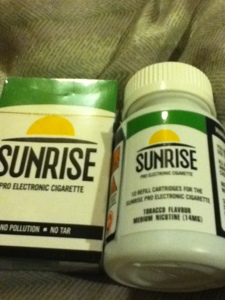 The pack comes with a cigarette style box which contains the two parts of the metal cigarette, two business card sized instruction leaflets, just the two pages, and the charger, while the little bottle comes with the refills which contain the nicotine.
Upon opening the pack, the Boy quickly read the instructions and charged up the cigarette. It comes with a black or platinum finish, and screws together easily with one of the little refills in the centre. It’s really simple to operate. Once charged, you just suck and go! You can see the Boy’s initial thoughts here:

His main feedback was twofold – that he would prefer a flavoured version that actually tastes more like tobacco, rather than the plain cartridges, which actually have no flavour. He also said that he would like some kind of carry case or pouch, which is not supplied with the pack. This would be useful to stop “pocket fluff” from getting on to it. The Boy assures me that everyone has Pocket Fluff and it’s not just him. I will give him the benefit of the doubt on that one. 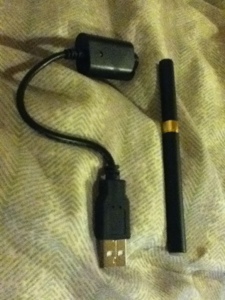 Other than the flavour, it seems that the smoke was a little thin, but good. These products are marketed as a slightly healthier alternative to cigarettes that you can smoke inside, rather than a stop smoking aid, but I’m hoping the Boy will use his as a springboard to stopping smoking. I allowed him, as you can see from the video, to test it inside (normally he gets kicked out in the garden) so that I could see what the smell was like and to my surprise there was actually nothing at all. This apparently is vapouriser technology, rather than anything actually being on fire, so there is no smell to the smoke or left in the room afterwards.

The Boy scored it 7 out of 10 – taking into account the problems he noticed, but he actually quite liked it. Time will tell if it helps him to quit the regular ciggies. I hope so and if it does I will definitely give it a full 10 out of 10 Extreme Points for helping to give me a few more years with my lovely husband!