It took me so, so long on Friday to add all my meal information to show you the sorts of meals I am eating on Jenny Craig, that this week I though the sensible thing would be to provide a midweek update.

I knew that this weekend was going to be a challenge, and it was. Read on, dear reader, and share my pain… 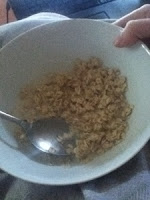 After my successful weigh in, I enjoyed a portion of porridge with apple and cinnamon. It had some dried apple pieces and was quite sweet, but almost refreshingly so. I very much enjoyed it.

I was having a chilled out day at home on Friday, so I had plenty of time to prepare a nice salad for lunch. Pepper, carrots, cucumber, lettuce and rocket were al complemented with a spoon of hummus (I had to add a protein and I used my three limited frees for the fat) which went nicely with my red thai curry noodles. The noodles were the nicest noodles I’ve had on Jenny Craig – a nice coconutty smell and taste and just the right amount of spice for me. Very flavourful and satisfying. 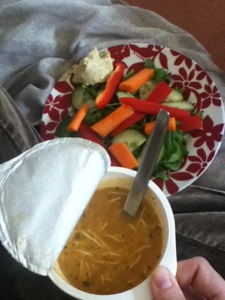 After this lovely, colourful meal of many raw vegetables, it goes briefly downhill. I had to do a review at Ed’s Easy Diner, which was delicious, but oh so naughty. I even forgot to ask for the side salad without dressing – but at least I did order a side salad.
After that, I was away on training for the weekend. I was able to have my JC muesli on Saturday morning, but after that it was bad – a baked potato and salad for lunch, carvery for tea. Sunday was a cooked breakfast (1000 calories in one fell swoop) and a sandwich, crisps and apple juice for lunch… And 4 biscuits – two shortcakes and two small choccy digestive type biscuits. And two glasses of wine. I didn’t really have much choice and I did, a bit, take the healthiest options available to me. Sometimes. For example, when I had the egg and cress sandwich, everyone else was having a roast dinner… I got home and felt a bit bad about it all, even though I had done quite a lot of walking through the weekend and cycled home, so I just finished the day with my JC thai potato crisps and went to bed.
Monday
No point dwelling on the past, and by Monday morning I was straight back on the programme. A lovely warming apple porridge set me up for another lovely day off. I insisted The Boy come out with a bike ride with me, where we went round some village charity shops, instead of going for a drink somewhere like we normally would. 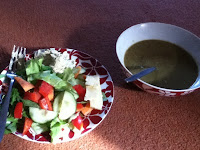 For lunch I had my pea and ham soup which was quite nice, if a little thin. It did have some little chunks of ham in though which was quite nice. I served it with salad and as I had to have an extra starch and fat, I went for a little bit of hummus and a tiny bit of cheese. It was pretty delicious and kept me full through housework and gardening in the afternoon. 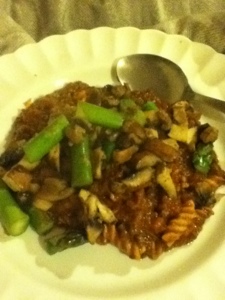 For dinner it was pasta bolognese, which I covered with a serving of garlic mushrooms and asparagus. This was also very good – the tomato and mince flavour was good, the pasta was ever so slightly al dente and it filled the gap left by the exertion of gardening. A pack of lightly salted crisps for my late snack and I was done – a good day!
Tuesday 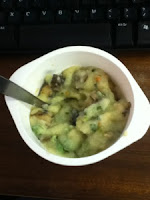 Today I feel like I’ve overcome any damage I did over the weekend. I started with JC muesli, cycled to work then walked 20 minutes to my first meeting and 20 minutes back. For lunch I had a pot of potato with peas, which was quite creamy and tasty, but made all the better by the leftover garlic mushrooms and asparagus I had brought from last night. This was nice, but didn’t overall keep me as full as I would have liked. I cycled to my next meeting after lunch and back and by late afternoon I was already feeling a bit hungry. Sad times indeed, because after work I had Zumba! I made it through that and was cycling home when all my energy pretty much ended! I push, push, pushed and I made it! 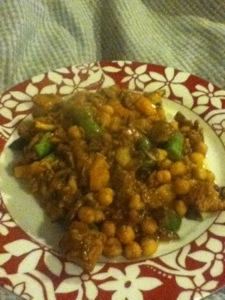 Immediately I got on to tonight’s tea. I dry fried off some mushrooms, orange pepper and asparagus and added in some garam masala. I added a couple of tablespoons of chickpeas as my additional protein I was owed from lunch. I then added the sachet of JC Chicken Tikka Masala and heated it all up together, adding a little water to loosen up the sauce a little. This gave me a very satisfying looking plate of food which I really enjoyed. The chicken was a mix of white and dark mean which was a little bit hard and dry for my tastes, but the sauce was very lovely – a good kick of spice and it went really, really well with the chickpeas – I would definitely recommend everyone tries that! And happy days, it was filling and I feel full and satisfied.
Now I am going to watch the Great British Bake Off Final with a full and happy belly and later on I’m going to have one of the lovely white chocolate cereal bars as my snack. And I am secure in the knowledge that this week is by no means a complete disaster.
See you on Sunday for the weigh in!!