It has been my third week on Jenny Craig. I have once again had some meals out so I wasn’t expecting miracles this week. I did try to make some sensible choices though. Sometimes. I have been contacted by my Jenny Craig consultant now though, although I missed the call this week because I was collecting my new bike from Nottingham… He seems pleasant enough and let me know that my eating style is a ‘social eater’ – useful.

After my weigh in, the day started with porridge with apple and cinnamon. Then The Boy and I went out for a Sunday lunch which was delicious. I resisted additional starters, sides and desserts and just had the lunch. And a slimline G&T. And half a bottle of red. Oh, and a pint on the way home. Luckily, this all kept me full for the rest of the day and I just had my Jenny Craig thai chilli potato bites for tea and that was plenty. 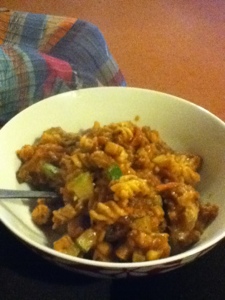 Monday was a yoghurt and wholewheat flake morning, which is my least favourite breakfast, but it’s OK. I’m not a big fan of yoghurt, so yoghurt flavoured things don’t really float my boat. Still, it kept me going through quite a busy morning when I had the pot of thai red curry noodles with a salad consisting of lettuce, cucumber and pepper with a little cheese and salami.

Dinner was the Jenny Craig tomato and vegetable pasta, which I added courgette and aubergine to as well as a little fried off sausage and a spoon of creme fraiche.  It came to 426 calories, one of the highest calorie JC meals I’ve had and was by far one of the most disappointing, just really uninspiring food. This made me quite sulky for the rest of the evening! 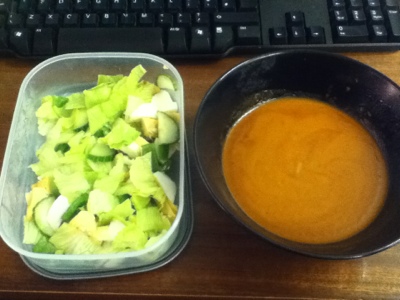 Tuesday was a porridge start, which remains an excellent choice on these cold, wintry mornings. I don’t know how enjoyable it would be on a warm summer’s morning, but there you go! My lunch was a tangy tomato soup, my least favourite of all the soups, with a mixed leaf salad, artichoke hearts and a boiled egg. As you can imagine, the artichoke and the boiled egg were the redeeming factors to this meal and it was pretty satisfying, so I was not voraciously hungry by the time dinner time came around. 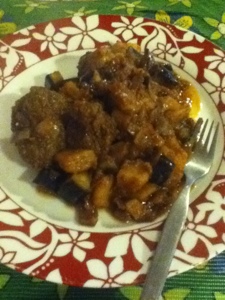 Dinner was a packet of beef meatballs with potatoes. I had made The Boy and I a load of aubergine and red onion with Moroccan spices which really added a bit of interest to the dish. The meatballs were a pretty good size and quite tasty too, so although this dish looked quite uninspiring as it went into the pan, I actually quite enjoyed it in the event.

It didn’t look very big either, but was actually quite a good portion in the end – I guess because most of it was protein in the form of meatballs. I finished the day with a packet of the Jenny Craig ready salted potato crisps things – I reckon I could get quite used to having a bag of crisps every other day or so, but I’m not sure that is the attitude that Jenny Craig are trying to inspire in me! 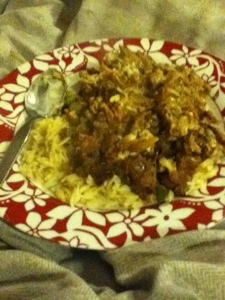 Wednesday was another porridge start, this time with apple and cinnamon. Again, tasty, but they may as well drop the cinnamon from the title as you can’t taste it! Lunch was pea and ham soup, one of the finer soups, and then for dinner I had the thick vegetable and green lentil dhal. This was one of my favourite meals of the whole programme. I had enough ‘extras’ that day to serve it with 12 cup of rice, a spoon of creme fraiche as well as adding a red onion and some peppers. It was delicious, and extremely filling. A good amount of spice and I actually felt on the verge of overful when I finished. I even considered leaving a few spoonfuls. But it was very nice, so obviously I didn’t. I managed to force down a cereal bar a few hours later, whilst watching the TV. Very nice. 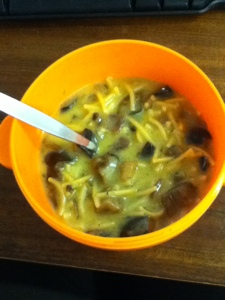 Another yoghurty flake poor start was offset by lunch, which was a pot of noodles in mushroom and cream sauce to which I added the left over Moroccan aubergine and red onion. Delicious! I’m a big fan of anything in a creamy sauce anyway, so this was a good meal. The noodles were also a very thin pasta, rather than a noodle like the sweet and sour or red thai ones. Great meal and ready really quickly.

That evening we had a restaurant review to do – two courses and a bottle of wine between us, so things went out the window a little. But it was very nice and there was a good amount of vegetables served with it, so it wasn’t all bad!
Friday

Friday there was no milk in, so no cereal for me. This led to a quiet sense of desperation through the morning, until the stroke of 12 when I could eat my pea and ham soup! I was, understandably, starving by the time I got home, so I used my starch and fat from lunch to have 20g of Pringles – woo hoo! They took the edge off my hunger and were delicious! 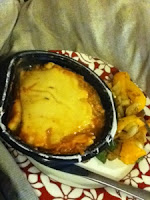 For dinner I had the Jenny Craig lasagne which, from the picture, I was quite excited to try. It was surprisingly disappointing – it tasted like a deconstructed tin of value ravioli, almost exactly! There was no cheesy or creamy element either. Sad times. The nicest thing was the pepper, okra and onion that the Boy made for me to go with it!! I had one of the milk chocolate digestive bars later on in the evening, which made up for it a little bit, but not really.
Saturday
I had to go to That London so I quickly wolfed down my muesli in the morning and headed out on the train. For lunch, I was pretty busy but I managed to grab a Tracker bar and a bottle of Pomegranate and Green tea at the Google offices (for free, very cool). I then took the opportunity to meet a friend and had a pint and some red wine in the afternoon (you can see why I didn’t have much faith in a good result today!!) and then scurried on home. My tea was the chicken provencal with durum wheat, which the Boy made me some more peppers, okra and onion as an accompaniment. 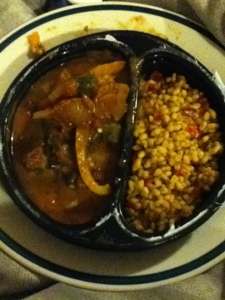 Oh, and I had a packet of dried fruit on the train, also snaffled from Google, which were 85 calories and then a bag of Jenny Craig crisps in the evening… So imagine my surprise when I got up this morning, hopped on the scales and this happened: 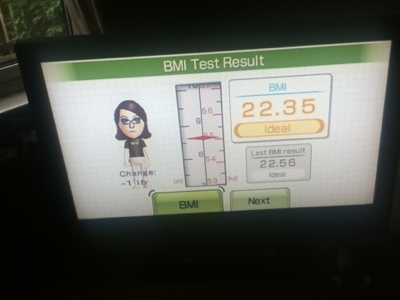 The wii is telling me that I am now 8st 9lbs, which is actually more than a pound loss than last week, but I guess it’s just a pound and a bit or something so the numbers all stack up. Seems to all be going in the right direction though…
Start weight: 9st 2lbs
Target weight: 8st 8lbs
This week: -1lb
Total loss: -7lb
Current weight: 8st 9lb
BMI: 22.35 (target 22)

Happy days! I think it really is my portion control that is making all the difference now, and also JC forcing me to make the right choices more often than not. I have one more week on JC now and then I’m on my own, so we’ll see what lessons I have learned then. Hopefully I’ll get rid of these last couple of pounds this week and then we’ll move on to a weight maintanence blog and not a weight loss blog!
Many thanks once again to Life in a Breakdown for this most excellent linky: