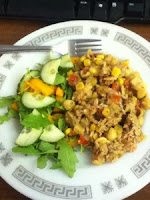 Wednesday
As previously described, this week I have been sticking faithfully to my Jenny Craig food plan to make up for the weekend of food reviewing and being away on training that I have just had. And I’ve done really well at keeping on at it. I started off with some nice warming porridge with raspberry, which was good as it was a bit of a miserable day.
Wednesday lunch was a french style tuna salad which I heated up and then served with a cold salad. It was really tasty – there were little chunks of potato in there, lots of tuna and some sweetcorn. Not bad at all. And I’m sure you’ll agree, it was one of the prettiest meals of the week with all the colour from the lettuce and the peppers and sweetcorn. 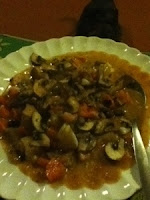 Wednesday night was a chicken chasseur with potatoes night, which I added a load of extra mushrooms and potatoes to. I was also allowed an additional fat serving, so I stirred in a spoonful of creme fraiche which made the whole thing taste really luxurious. This was a good day’s eating, with a bag of the JC crisps for my snack in the evening I wasn’t overly hungry at any point in the day.
Thursday
Thursday started off with more porridge, this time apple and cinnamon. You’ve seen pictures of all the breakfasts now so I haven’t bothered taking any more. I’m getting to quite like the porridge days now, perhaps it’s the time of the year meaning there is something quite nice about a hot breakfast.
Lunchtime was back to the Winter Vegetable Soup which I had with salad and a little bit of cheese to go with one of the extra fat portions. I’ve had this before and so long as you have plenty of stuff with it to bulk it out, the soup itself is actually very nice. It’s one of the lowest calorie per portion dishes though so you have to make sure you have enough to stay full. 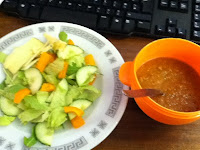 Dinner was a three bean chilli which I had cunning reserved my starch portion for – so I had it with half a cup of rice – hallelujah, starchy goodness! It was a nice chilli, not as much kick as the beef version, but then I had stirred in a spoon of creme fraiche as my fat and so that may have cooled it a little bit. It was a good variety of beans though, so I liked that. 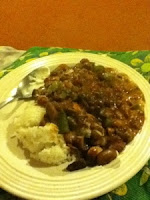 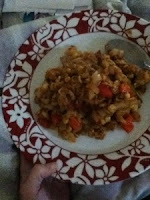 This was a wholewheat and chocolate flakes day in the morning. These are kind of like Special K, so they taste alright and keep you full-ish, up to a point. I find that I tend to have my lunch a bit earlier on those days though. This day I was supposed to have another pot of sweet and sour noodles, but as I’m really not that keen on them and I had the day off work, I swapped it for a portion of the French Tuna Pasta Salad which I had missed last weekend and gave the noodles to the Boy! With an onion and pepper fried up and added in, this made a good and satisfying portion of food. In the absence of as many carbs as I usually eat, I’m really noticing how important protein is at keeping me full.
In the evening I had another ‘ready meal’ type affair, roast chicken in gravy with mashed potato. The Boy made this for me (well, boiled it!) and served it with asparagus. The chicken was good, the gravy was a bit watery and the mashed potato was just a bit bizarre to be honest. For food that was served up like ‘fresh’ the mash had a weird texture and didn’t taste at all like fresh potatoes. I reckon you’re actually better off, flavour wise, with the little pots of mash at lunch time!!! My snack in the evening was the last of the untried snack – a dark chocolate cereal bar, which like the others was very tasty with a nice chocolatey hit. Nicer than the white chocolate version, unfortunately as I have less of them!!
The Boy took me out in the early evening as well and I had one (large) glass of wine. It was heavenly. 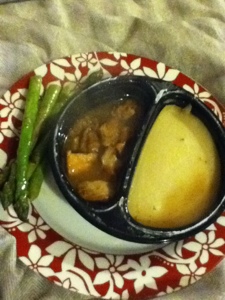 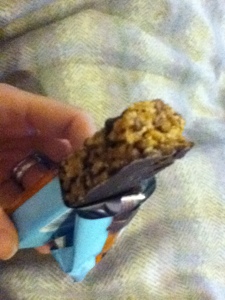 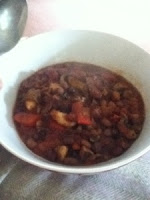 Yesterday was the last day of my second week on Jenny Craig. I had the wholewheat and chocolate flakes for breakfast and then a lunch that I had been looking forward to, Mixed Bean and Chorizo soup. I fried up some mushroom and peppers first and then added the soup to warm. It was a very thick soup, which I liked, and although the overall flavour was good the chorizo they had used didn’t taste particularly good of itself- almost like the flavour had all leached out. So that was a little bit disappointing, but overall it was a warming and satisfying meal.

In the evening it was chicken chasseur and potatoes again. I learned my lesson from earlier in the week and put it in a bowl this time, surely it is the king of all the gloopy meals. It tasted good though, especially with a load of courgette and the last of the mushrooms stirred in and some creme fraiche to finish. It’s getting late in the morning now and I’m still not overly hungry so it must have done the trick. My snack yesterday was one of the chocolate digestive bars. 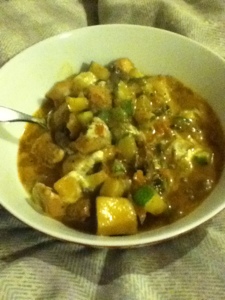 So where does that leave us weight-wise I hear you cry? Well, foolishly I weighed myself on Friday as I felt like I was having such a good week. I’d been to zumba twice and cycled everywhere. But no, I was heavier. So Saturday morning I weighed myself again. Nope, heavier still. It was with a heavy heart therefore, that I got on the scales this morning, but it was all good!