I was very excited to be invited to review Le Bistrot Pierre, Leicester, as it has always been one of my favourite places to eat in the city. The Boy and I go there a few times a year, but always around New Year – it’s become something of a tradition for us. 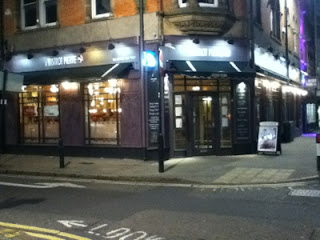 Bistrot Pierre describes itself as Casual Dining, and the atmosphere is relaxed and informal. Recently, they decided to ain’t the whole building a rather odd lavenderlilac type colour which was very odd and actually rather gross, but now they have restored it to something less eye watering. Inside, the décor is more plain and clean than previously, which looks very smart but is less homely and rustic-French in feel than previously. They still have a couple of pieces of cookware and French art on the walls, but not as much as previously. However, it’s still comfortable enough and the tables are in a better arrangement than previously so you don’t have waiting staff squeezing by you the whole time! 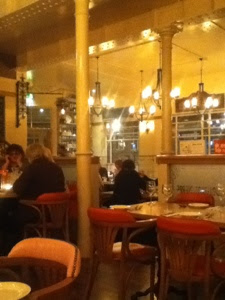 We were seated after a brief wait at the front door. We had been invited to try the Early Bird Menu, which offers two courses for £13.90 before 6.45pm. We chose the bottle of Syrah La Garenne, Vin de Pays d’Oc, 2011 to accompany our meal from the ‘Spicy, Rich, Aromatic’ section of the wine list. It is currently priced at £16.95 a bottle. I really like that they split the wines into different flavour groups like that. It made it really easy to narrow down which wines you were likely to enjoy the most, or to establish which wine was most likely to match your food order. The Syrah was just what it said on the tin, deep and mellow but also full of reserved dark fruit. An absolute winner for me, I just loved it and The Boy agreed. He joked that we would be needing a second bottle of it after taking his very first sip! 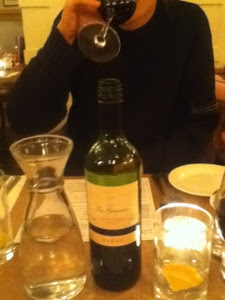 The restaurant was bustling, with a jovial yet relaxed atmosphere, and we were well attended to by the waiting staff who never made us wait long when we wanted to order something. The staff were also excellent at making recommendations – both for us and for other guests I heard them all talking knowledgeably about the menu, the ingredients and flavours and selecting excellent choices based on the customers requirements. For example, for my starter I was having trouble deciding between the roasted beetroot risotto and the Fromage Grille (the Saint Marcellin cheese was unfortunately off the menu and had been replaced with baked Camembert, which wasn’t as interesting to me). The waitress recommended the cheese as the risotto was a bit heavier and so the cheese might go better with the chicken dish to follow that I had selected for my main. I must say I was a little sceptical as baked cheese sounded anything but light, but she was right!! 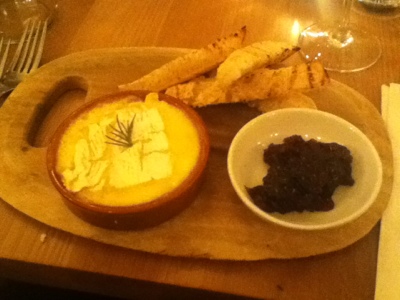 So here is my starter, the baked Camembert, served with red onion confiture and sour dough toast. Thankfully we were also brought more bread as we’d wolfed the first lot before the starters arrived as we were both starving! I really enjoyed the starter. There was perhaps fractionally more cheese than I needed for a starter, and way too much of the confiture for my tastes. It really was a red onion jam, so was extremely sweet. In some ways I felt this overpowered the cheese flavour to some extent – I wonder if the Saint Marcellin would be able to hold its own better. I would have preferred simple caramelised red onions on that basis, so there would be a more subtle sweetness to cut through the creaminess of the cheese. The rosemary sprig in the cheese was a nice touch, but had no flavouring effect, presumably because this is a small serve not a whole camembert and so therefore doesn’t take so long to bake. Maybe more rosemary springs and also some slivers of garlic could be added to a slower bake? But these are quite nit-picky points, I genuinely enjoyed this starter. 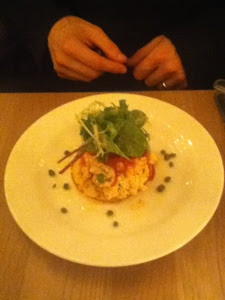 The Boy ordered the Rillettes de Saumon, a rillette of fresh and oak smoked Scottish salmon with blini, lemon and baby capers. He’s not the biggest salmon fan, so I was a bit confused that he ordered it, but he wanted to try capers as he’s never had them before! He’s an absolute sucker for trying something new, and we both liked the capers! Neither of us knew what a rillette was either, so it was with great interest that we watched this dish being delivered to the table! Turns out it is an almost pate like dish, which was served in a great tower on top of the blini. There was also salad and red onion served on top. The Boy was extremely happy with this starter. Even though he wouldn’t normally choose salmon, he was positively enthused by this dish, remarking about the excellent balance of flavours, the high quality of the salmon and the bite of the capers. He said that he would happily choose that dish again, which is high praise indeed. 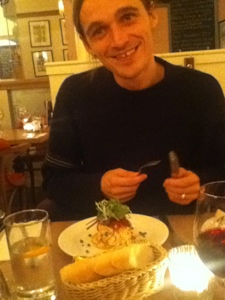 Our plates were cleared in good time and it was just a short wait for our main courses. I ordered the Poulet for main – pan-fried chicken breast with a cassoulet of smoked bacon, chorizo, flagolet beans and plum tomatoes.  Our mains were served with a sharing portion of gratin potatoes and vegetables – in this case red cabbage, carrots and courgettes. I always would prefer a few more vegetables, but I guess that’s the nature of French cuisine – they’re not overly generous with the greens! 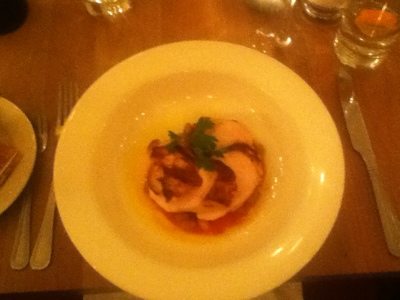 As you can see, my main was presented beautifully. The chicken was excellent quality and had a really tasty, and noticeable flavour, which is unusual for chicken breast! The pan fried skin also contributed to the lovely flavour. The whole was swimming in a little too much olive oil for my taste, but of course it didn’t impact on the flavour. The cassoulet was good as well, I love flagolet beans so that was great. I could only identify two little pieces of chorizo though and no bacon, so unfortunately those elements did not contribute to the flavour of the dish. That said though, it was an absolutely excellent main course. I was really very impressed, mostly with the quality and careful cooking of the chicken. 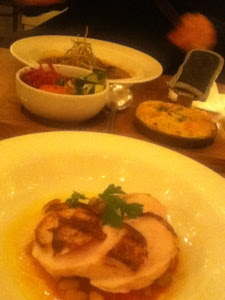 The Boy selected the Beouf a la Violette de Brive. This was a dish of braised Scottish beef, with red wine, leeks and mustard. The Boy was surprised that his leeks were served crispy and in a tower on top of the braised beef, but he enjoyed it. He said the mustard flavour was subtle and not overpowering, while the beef was excellently slow braised, tender and delicious. I always find that the braised beef dishes are really Bistrot Pierre’s speciality – you can always guarantee it will be a great dish.
All in all, our visit to Bistrot Pierre did not disappoint. I had high expectations and they were fulfilled – great wine, delicious, well presented food and friendly but relaxed service in a clean, pleasant environment with a quiet, but friendly atmosphere. It still remains high on my list of Leicester eateries and I could only give 9.5 out of 10 Extreme Points. I’d love to give them 10, but I’d love even more to see those slight tweaks to the menu to make it truly perfect. However, in terms of value for money you really cannot go wrong for food of this standard. Well done Bistrot Pierre, look at our satisfied faces and empty plates! 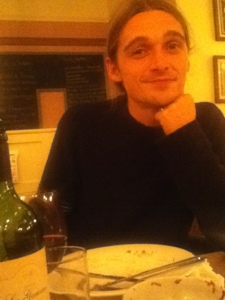 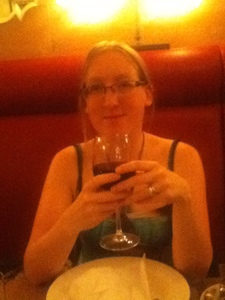