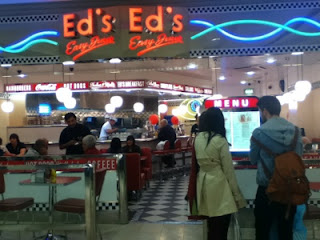 It feels like our American adventure hasn’t really ended yet, and being invited to review Ed’s Easy Diner in Highcross, Leicester, has really been yet another continuation of the US vibe.

We weren’t sure how much of an authentic American experience we were going to enjoy, on the lower level of the Highcross centre in the middle of Leicester, but I think it’s fair to say we were pleasantly surprised. Arriving early on a Friday evening, the diner was already bustling, with most tables full and the sound of rock n roll filling the air.

We were immediately greeted by enthusiastic and friendly waiting staff, who were the real signature of our visit, and shown to our table. While we were perusing the menu I enjoyed looking round at the little decor touches that really gave that 50s diner vibe. 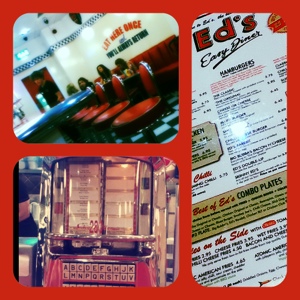 For me, the bold red, black and white colour scheme, the bar side seating, retro speakers on the walls and the little jukeboxes on some of the tables were the real touches that gave the place a great theme feel. I was a little bit gutted we didn’t have one of the tiny jukeboxes. They took 20p to play a song and the menu informed us that all the proceeds from them goes to charity which I think is lovely. Plus this might have meant we could have selected a little bit more variety than 90% Elvis songs!! Don’t get me wrong, I like Elvis in this rock n roll style environment, but there is so much great American music from this period, I would have enjoyed a little more variety.

The only problem I could see with the decor was that the lovely seating had gaps underneath, so food and litter had clearly accumulated there over the day. While the restaurant was very clean everywhere else, the slightly crowded nature of the diner and the constant flow of customers meant that, certainly while we were there, this litter was not swept up. I think perhaps furniture that reaches the floor, so there are not these little ‘cubby holes’ for trash that only the customers can see would be a better thing! It’s definitely not a bad reflection on the staff as they would not have been able to see this problem from where they were standing.

The extremely welcoming waiting staff, fun decor and toe tapping music is clearly doing the job for the people of Leicester. The restaurant had an extremely pleasant atmosphere and I strongly suspect that this was because of the great mix of customers that were in there. There were groups of teenagers sharing milkshakes, family groups with young babies, twenty-something couples gazing longingly over the table and older couples, talking about the music and the memories it was engendering. I really enjoyed that this is not a pretentious restaurant, it’s friendly and a little bit twee and as such, it does not have pretentious clientele, so it’s a really lovely place to relax and enjoy some simple, but tasty food. 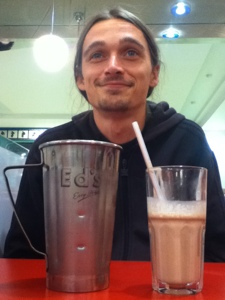 We ordered our drinks first. The Boy went for one of their signature shakes, which was thick and delicious, the serving providing more than enough for two glasses and essentially, therefore, easily acting as a meal in itself if you wanted it to! I had a glass of red wine, which was marked on the menu as ‘Californian’. Given the volume, I knew that it would be an individual serve bottle, but for some reason I was not given the bottle, just a slightly too small glass, absolutely full to the brim – a 175ml capacity glass is no good for 187 or so millilitre bottle servings!! I would definitely recommend they start serving a little of the bottle in the glass and providing the whole shebang to the customer so they can see what they  are drinking. As it turned out, it was a so-so Merlot – not something I would have again I don’t think, but not deeply offensive by any means.

We ordered our food and waited, the serving times being perfectly adequate for a Friday evening in such a busy restaurant. Soon, a veritable feast appeared before our eyes! We had ordered the Chicken Club sandwich for me, the Big Bubba’s Bacon N Cheese for the Boy, and a portion of Atomic American Fries and a side salad for us to share. 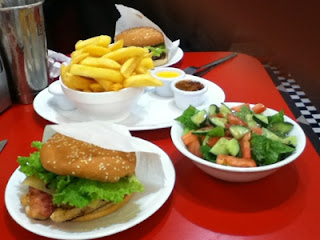 My burger, the Chicken Club, had grilled chicken breast in a bun with salad with bacon, swiss cheese and guacamole. Unfortunately, mine did not have mayonnaise on it, as advertised on the menu, so the chicken tasted a little dry at first, but I soon put some of the mayonnaise from the Atomic Fries on there and that sorted it out a treat. Once I had sorted out the dryness, it was very good. The combination of flavours was nice – particularly the sweet cure bacon complementing the smooth (and quite garlicky) guacamole. 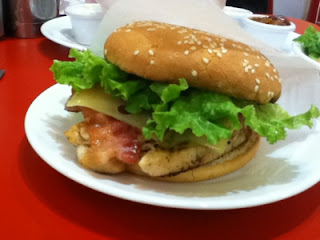 The Boy said that his burger was juicy and nice to eat, with American cheese and bacon on as well as your usual lettuce, tomato, onion and a pickle. He said that while there was a little sauce on there, there wasn’t really very much and again, more sauce would be the improving factor. Quite a lot of the diners we went to in California seemed to pride themselves on their secret recipe burger sauce – perhaps this is an element of American culture this chain could learn from. 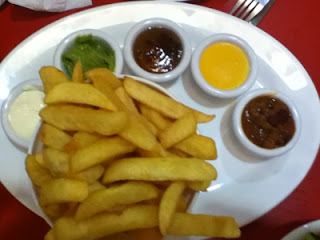 Our Atomic American Fries were quite tasty. We asked the waitress beforehand if this was recommended as a sharing portion or an individual and she advised that most people shared them. I’m glad she told us that, as there were a lot! They were most definitely chips, not fries, but they were well cooked – crispy on the outside and soft in the middle, as you would hope. They were served with a range of dips – mayonnaise, guacamole, jalapeno jelly, American cheese dip and chilli. All of these were very tasty, I would have them all again individually or in combination. I would have thought for the price, £4.65 per portion, you could perhaps have expected slightly more chilli that you could pour over the fries, rather than just having a beef chilli ‘dipping pot’ – but then I love chilli, and I did particularly enjoy this one, so maybe I am just being greedy. On the basis of that little taster though, I will certainly be ordering the chilli on my next visit. 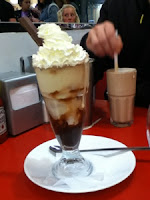 As I’ve been learning so much about portion control recently, I was satisfied, but not full after my meal and so we thought that it would be reasonable to sample dessert also. (NB This is obviously a big fat lie, I didn’t need a dessert, but I wanted one so I had one). We got the Kit Kat Chocolate Sundae, which was the most exciting thing ever for two main reasons:
No seriously, I can’t remember ever having an ice cream based dessert in a fancy glass, with a long spoon. So I wasn’t about to pass up the chance. And, unsurprisingly, it was nom. It contained kit kat, ice cream, chocolate sauce and squirty cream. I’m not sure where it could have gone bad to be honest. As you’ll see from the picture, the Boy had another shake, with more rum in. Any normal person would have exploded after one tin of milkshake I think, but he has really depth of character and can really dig in when the need arises…
Overall, I think I can give Ed’s Easy Diner nothing less than 8 out of 10 Extreme Points. It had a great atmosphere, extremely helpful staff who were polite, welcoming and warm and the food was of a good standard. There are a few small tweaks which would improve things, but they have been noted above and do not need to be dwelled upon. Many thanks to our main waiter, Alex, whose customer service skills were of particular note. We will be back to Ed’s, for the atmosphere and the jive as much as anything else. It’s not fine dining, but it doesn’t give you the Rock n Roll Blues either.
Edit: I knew I’d forget something. Little red plastic baskets, that’s what the burgers and fries should come in, not on plates. Plates = British, Plastic baskets = American. They’re weirdly satisfying to eat out of, trust me.
Edit 2: I also meant to write that I’d asked our waiter if they offered customers a box if they wanted to take uneaten food away. He said that they did happily offer that service, however, not many people took them up on it which meant quite a degree of food waste. What a shame this is – perhaps in order to change this wasteful culture, waiting staff should begin asking people if they would like their meal boxed to takeaway if they have a lot leftover? #lovefoodhatewaste