99 Bottles of Beer on the Wall: The Bottle Cap Mosaic USA! 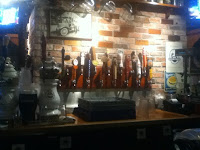 In California this August, we were extremely privileged to spend a whole bunch of time as the guests of  Mia and Dave Bossie, the illustrious owners of Santa Cruz‘s finest pub restaurant,  99  Bottles of Beer on the Wall. This is an awesome place that gives you a card so you can collect each of the 99 bottles of beer as you drink them and then when you’re done, you get a special plaque on the wall in order to honour your achievement for all eternity! Sadly, we were only around  for three weeks, so didn’t really stand a chance at making a real dent in the delicious list of 99 beers. We did sample a fair few though, and we  were particularly impressed with the local Santa Cruz brewed  offerings as well as the various beers from Lost Coast brewery in Eureka, CA (Tangerine Wheat now being my absolute number 1 beer in the whole world, bar none) and another place called Deschutes.

Given that we were made to feel so welcome in this awesome establishment, I felt it only right that we should present our hosts with a little reminder of our visit as a small token of our esteem. Given that I tend to make pieces of art out of lots of the same thing, I looked around to see what resources 99 bottles had to offer… 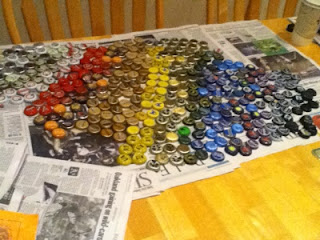 We had an abundance of bottle caps…. 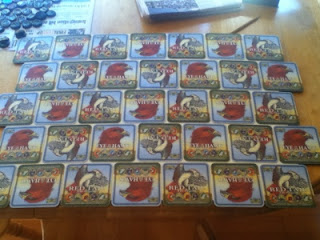 ….and the odd beer mat or two (thanks to the Mendocino brewing company)… 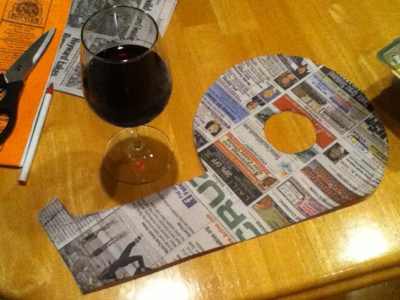 After a number of bottles of wine, an idea began to form in my head. There were a few paths that I could have chosen to go down, but because time was limited I knew that I had to keep it simple and punchy. So, a stylised version of the 99 Bottles logo it was.
I used a spray adhesive to attach the beer mats to a backboard, then created a ‘9’ template around which I drew to make an even outline. The bottle caps I then attached with a hot glue gun, which alternated between being a really fun and a really painful thing to do. Then after a few hours work, ta da!!! It was complete. 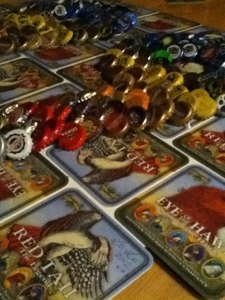 I can only apologise to Dave, I couldn’t resist and the Bud Light bottle caps are in there. I know it’s not a very good beer, but I’m sure some of your customers will occasionally dabble in the cheap lager end of the spectrum! 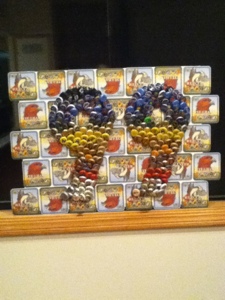 The piece is apparently now up on the wall in 99 Bottles of Beer, which is so cool! I love the idea that there is a little memory of us left in Santa Cruz and I’m really, really glad that Mia and Dave liked our little present!