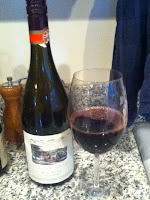 Those of you who were following my frivolous holiday tweets over August may have seen an early picture of a most enjoyable bottle of wine that I was experiencing, from local vineyard, Bonny Doon. This was a 2004 Le Cigare Volante, a now sadly sold out vintage – so I was lucky to try it. The humorous tale on the label really put a smile on my face, as did the excellent quality of the wine. The creator of The Flying Cigar, an homage to Chateauneuf du Pape, one Randall Grahm happened upon my tweets and let me know he was pleased to hear I had enjoyed his wine. Knowing that the winery was local, this was the only encouragement I needed to ask Mr Grahm if we could perhaps meet so that I could try some more of his wines. Luckily for me, he was quite amenable to this.

Randall Grahm has made quite a reputation for himself, both in the wine world and as a local personage in the Santa Cruz area. I found that any time we mentioned that we were going to meet him in a few days, people responded with comments about him being quite a ‘character’. The word ‘eccentric’ was mentioned on a few occasions. Being British and having a reputation for making 10 metre square mosaics out of baked goods, I generally regard being eccentric as an overwhelmingly positive characteristic, but it did make me intrigued to meet Randall all the more to see what the foundations for this reputation were.

The Boy and I ventured down to the Cigare Volante Restaurant and Tasting Room on a predictably sunny Californian afternoon. We momentarily got distracted by the neighbouring Santa Cruz Mountain Brewing Company‘s tasting room as we knew that a beer made by our kind host was being featured there, so it would have been rude not to venture in. I can recommend the own brand wheat beer as well as the featured craft ales – most enjoyable and refreshing in the heat. 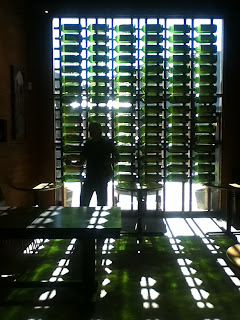 But I digress. Set in a reasonably non-descript, almost industrial style estate on the west side of Santa Cruz, CA, the Bonny Doon restaurant and tasting room is set in quite a highly competitive wine tasting area. However, it was clear as we walked through the area that Bonny Doon was by far the most popular tasting room in the area. This may be something to do with the fact that we arrived during Roswell hour, when Doon wines are offered at an incredible 51% off.

As you walk in to the reassuringly spacious restaurant, it is clear to see that Randell’s creative approach to wine making is also matched by his appreciation of fine aesthetics and indeed, innovative marketing. The place is crammed with artistic pieces – from small wall hung art to bold, theatrical statement architectural pieces. It’s truly a wonder to see the wall of green glass bottles delicately reflecting the afternoon sunshine or step through the giant barrel, with its interactive rocket launch buttons inside.

We settled in to a palatially sized booth, with an interesting Fibonacci design on the table. I had previously read about Randall’s interest in Biodynamic viticulture – harmonising agricultural practices with ‘the subtle forces of the universe’ – basically working with the land you have rather than trying to change its character to suit your practice. I would assume that the Fibonacci references are a subtle reference to maximising the harmony of the Bonny Doon winemaking method with the natural environs. 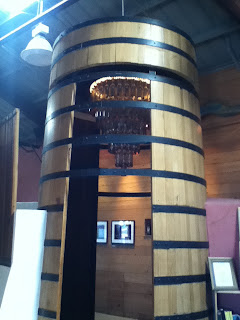 After a short time, Randall arrived. I was expecting mainly to taste some wine and find out a bit more about how it was made, but what I actually came out with was more like an interview with a wine tasting thrown in as an excellent aperitif. Either way, it was a fantastic afternoon and hopefully I can give you a flavour of the experience.

We had ordered ourselves a glass each of the 2009 Syrah Le Pousseur, a central coast Syrah that was selling for $35 a bottle and were enjoying the great deep flavours of this wine, which was full bodied enough to cut through a fatty meat like lamb breast or even pork belly. As we were discussing these flavours, Randell told us that this wine inspired division in his clients. He found the people of San Francisco more progressive and cultured than the folks from LA, and so while the LA people found this wine not deep enough, while the San Franciscoaniteians complained of it being too full bodied for their tastes! We found it just excellent as big, bold reds are where it is at for us at the moment.

I asked Randall what his personal favourites were. He said simply a good red Burgundy, and perhaps a crisp Riesling in the summer, but actually his real passion were for wines that he’d never had before. When he was younger and starting out in the wine industry, he’d been lucky enough to drink 1964 Cheval Blanc every week, which became something like a fetish for him. Even though his palette was not sophisticated then, he knew it was lucious, smokey and unctuos. Therefore, if it was $20 a bottle he’d drink it forever. A quick search on Google suggests that a bottle of 1964 Cheval Blanc is more likely to set you back somewhere in the region of $1000, so maybe more of an occasional treat? When asked what it was about this particular wine that he loved, Randall described the texture having a silky Burgundian quality, with an ethereal balance that he was sure he would still recognise – not a sweet wine, but just the merest suggestion of sweetness. It sounds divine and already I was really enjoying Grahm’s evident intelligence and passion for his discipline.

Talking more about the culture within his own environs, Randall described how New World wines can be over the top and overripe, so it has been his aim to get that perfect balance. Where the horizon is infinite – aim to pick the perfect fruit at the perfect point of ripeness. A worthy aim indeed, and no small goal to set oneself. It is fascinating to hear about the goals of a truly knowledgeable wine producer. Grahm has had much experience in both New and Old World wine contexts so I found myself hugely respectful of his opinion. And I was right to do so – because the next two wines he broke out truly taught me a huge lesson about the subtleties of wine and genuinely inspired me.

Randall offered us a taste of his 2008 Le Cigare Volante Normale in comparison with the 2008 Le Cigare Volante Reserve. These are the same wine – the difference being that the Reserve has been aged in demi johns with magnetic stirrers. And $14 dollars a bottle. Unbelievably (well, at least for me as a relative wine novice) the flavour is totally different between the two. You would not believe they are the same wine. The Reserve is almost less sweet in smell. It has distinctly more mellow characteristics but still a bolder, more enjoyable flavour. The Normale had a much sharper smell and this acidity was more evident in the tasting as well. The Reserve had great savoury notes – sort of earthy. We settled on this being a more mushroom like smell than a smokey flavour.. In short, the Reserve is a much better wine. I was blown away that the anaerobic storage could make such a dramatic difference to the character of a wine. This immediately inspired me to want to know more about wine and more importantly, to know more about good wine.

This got us talking about the wine industry and its customers more generally. Randall expressed concerns that young culture now is not one of brand loyalty. Young wine drinkers now are more inclined to try anything once – which is a win for people who have their products everywhere, they will always get picked up regardless of quality. Randall likened this to the internet, where everything has the same value. Almost ironically, the less someone knows about wine the more loyal they are likely to be, as people will continue to pick up the same bottle time and time again.

I asked Randall who he was making wine for and he simply said the thinking wine drinker. He told me that his wine’s are better quality now that in earlier years, but also he is less gimmicky now which has resulted in lower sales. He’s currently buying in grapes. His ‘unusual’ farming methods (using biodynamic principles) basically mean that his production is more expensive. He knows that people can live a reasonable life without tasting his wine, but his real goal is to change people’s lives when they taste his product. He doesn’t think he’s there yet, but he’s working towards it. He described more about his biodynamic principles, mainly coming to the conclusion that it’s irrelevant whether people want to believe that cosmic bodies influence nature – he objectively produces evidence that these practices work. After all, people accept that the moon affects the tides, so why not this? 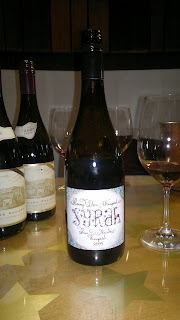 While Biodynamics can be seen as a spiritual path, for Grahm the evidence of the mechanics speaks for itself. He aims to ‘transform the farmer rather than the land’. This means he is making wines in a different way,  now he is feeling more agnostic about Vins de Terroir in California. I sensed that he has become somewhat weary of wine production in California. He described the local wines like a Hollywood set – they look charming on the outside, but scratch the surface and it’s just plywood. He is aiming for depth, originality and soul and is still en route to that life changing experience for his clients.

Indeed, Randall confessed that his first wines were the best, when he applied his beginners mind and blind luck. I wasn’t sure if I could possibly agree given that by this point we had moved on to the Syrah Bien Nacido Vineyard 2005. This was very close to what I would consider to be my ideal wine. Fruity, almost like a soft fruit (strawberry?) flavour, but also that powerful punch of cherry like notes. It was devilishly smooth and easy to drink. While Randall may not have reached his wine Nirvana just yet, his wines certainly make me very happy.

So, given the hype before our visit, was Randall Grahm everything I expected he would be? Well, no, not really. Anyone who’s opening gambit is to describe the vineyard he had visited that morning through the medium of a (quite obscure) Frank Zappa quote is alright by me and that was how I found Randall. An extremely pleasant, easy going and interesting man with interesting opinions about wine making, the wine industry and much, much more besides. I agree that his methods may be slightly divergent from the orthodoxy of the industry, but surely that is the nature of the New World. There should be so much more room for experimentation and creativity than in the more rigid traditions of the great French chateaux for example. I can’t imagine why you would do anything buy applaud someone who uses less popular, less predictable grape varieties as well – I love to try something different rather than the cardboard cut out wines that we are so often offered. He’s a lovely man who makes lovely wine. Buy some now, you won’t regret it.

Happily, we’ve discovered that the Red Lion Wine Pub in our own fair county carries a Bonny Doon vintage. Yippee!