Those of you who have been following my blog will have seen that this weekend the Boy and I were celebrating our tenth wedding anniversary, and now my waistline is paying the price. One of the main reasons for this was the tasty anniversary dinner we had at Barrington’s Wine Bar and Lounge, on New Walk, Leicester.

After a discussion on Twitter, they very kindly offered to treat us to dinner so I could write a review, on the proviso that we bought our own drinks. I couldn’t argue with that, so in we went. 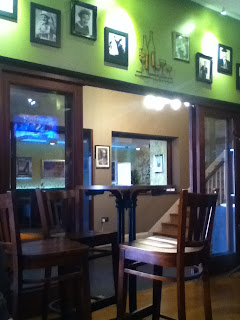 The decor in the bar is really simple and classic. There is a good deal of dark wood and clean lines and the furniture is of a good quality. The colour scheme is deep and earthy, with rich greens and purples. It’s quite reminiscient of Henry’s Champagne Bar (for those who remember it) in some ways, although not quite as intimate.

There are lots of framed portraits of comedians around the place, especially Carry On stars that I noticed, which I thought was a nice, slightly quirky touch giving an indication of the owner’s personality. When we arrived, in the ‘after work on a Friday’ period, there were a big group of people in clearly on a work drink and other couples came and went. The atmosphere was relaxed and friendly, but I thought it was a real shame that it had nowhere near the popularity that the nearby mass chain, the Slug and Lettuce has on a Friday night. It’s clear from the vibe that they are aiming for similar audiences. I wonder if perhaps Barrington’s should be offering special discounts to Leicester City Council staff to draw that crowd over from the Towers just across the road? This is such a cute little independent place that it should definitely have a bigger crowd than the Slag and Fetish! 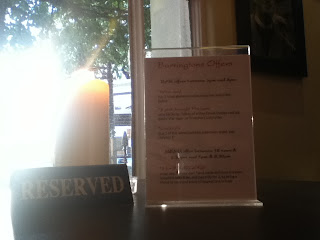 They have a decent enough wine selection, as you would expect for somewhere that describes itself as a Wine Bar! The Happy Hour offer includes buy two large glasses of wine and get the rest of the bottle free, so we plumped for a nice 2011 Five Foot Track Shiraz. This was labelled as ‘South East Australian’ – it’s been a while since I had a bottle of wine which didn’t narrow it down a bit more than that, but no matter! It was very fruity, with simple cherry/soft fruit flavours and a very slight creamy finish. It was much more of a medium bodied red than I prefer, but I definitely enjoyed it – it was a smooth drink! I would have preferred a bigger wine glass though, so I could slosh in about and get my nose right in! All part of the experience if you ask me. 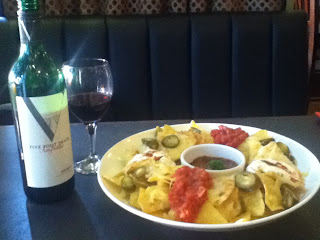 To start, our lovely host, Jamie recommended the nachos to share. At £4.95, this is more than a decent portion and about a million times better than nachos we had in a pub recently with crispy, over microwaved chips all in a big block!! Barrington’s nachos came with fresh chopped jalapenos, which were delicious and not overly spicy, sour cream with a dash of paprika and a fresh salsa made of tomatoes and white onion and possibly a dash of garlic. There was also a pot of very tasty beef chilli (vegetarian option available) and a good helping of gooey, but not plastic cheese! They were very tasty indeed as well as well presented and our only complaint was that we were fighting over the chilli (I know, on our 10th anniversary!) so a slightly larger serving would have been appreciated. 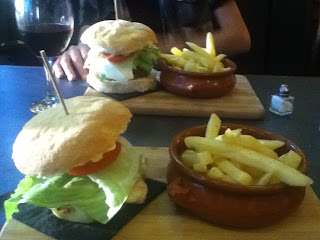 A great start, but the main was the real challenge. After our American Adventure, the Boy was gasping for his first English burger to compare with the feasts he experienced on holiday… Therefore, he had to go for the Texas Tower Burger, at just under £10, which had two massive, fresh made beef patties, topped with cheese, jalapenos, onion, tomato and lettuce. It was huge, just as huge as it’s American rivals! He deemed it delicious, although it did kind of fall apart and he had to eat it with a knife and fork. And he still managed to get it all over the table. Once again, on Jamie’s recommendation, I got the chicken breast, mozzerella and pesto burger. This was a moist chicken breast fillet in a bun. The mozzerella was light and the pesto was a lovely combination. It was a shame that they normally make their own pesto, but not the day we visited (basil shortage at Leicester Market?) but I totally enjoyed it anyway. Personally, I would prefer the iceberg lettuce shredded as well, just because that would have been easier to eat.

I have to admit, we were pretty stuffed by this point, but you can’t do a proper review without tasting all the courses, right? They have a selection of three puddings – a trio of ice creams, toffee pavlova or chocolate brownie – pretty much something for everyone. We opted for the toffee pavlova and soon regretted it, as it is the sweetest dessert known to man. You know the other day when I called the Twinkie “Satan’s own snack cake”? Well this dessert coughs excess sugar all over Twinkies. It is a lovely, fresh made meringue, topped with a huge dollop of fresh cream, sprinkled with toffee chunks and all smothered in a fresh made toffee sauce. Bring on the sugar, cream and butter! It was undeniably delicious, but definitely more one for the pudding fiends amongst you. It confirmed me as a savoury fan. Next time I shall remember to just say no!
Overall, we really enjoyed our evening at Barrington’s. The staff were friendly and knowledgeable about their menu and wines. They occasionally offer professional wine tasting evenings which sound like a lot of fun and would be something I would like to go back for. The atmosphere is relaxed, the one recommendation that we thought on the night was that the indie and pop music in the background didn’t really fit – perhaps some jazz in the evenings or perhaps even take that quirky decor to the next stage by having showtunes low in the background to really build up that Barrington’s special character? The chalkboard menus and widescreen TV gave areas of the bar more of a pub feel than lounge to me, which I think they do not need. We were laughing at the idea of some of the refined ladies who popped in to quaff some fizz ordering one of the burgers and getting relish all down their expensive manicures. And that’s what I like about Barrington’s – it isn’t easily categorized. It’s sort of a bar-pub-loungey-wine-place. Maybe if it was more one thing than another it would become even more successful. But I really think it should play on it’s cosiness, its friendly staff and develop a quirky character all of its own. That’s the way to take on those ridiculous, overpriced chain bars down the road.
I’ve actually heard that they’re in the market for new artwork for the venue. I wonder if this is the opportunity to tout my own talents… Now that is how you get a quirky reputation!
I happily give the meal we ate 9 out of 10 Extreme Points and the wine selection gets an enjoyable 7 out of 10. I absolutely cannot fault the service – the fine menu recommendations we were given, the friendly banter we enjoyed and of course, the absolutely amazingly sweet touch that when we paid the bill they presented us with an Anniversary card! The Boy offers 8 out of 10 Hippy Points as unfortunately his chips were a little underdone (I don’t think he’s ever given a perfect 10 though!).