This was one of the week’s I was aiming for – the first weekend of wedding season 2012. So I’m giving myself the Sunday off the scales. Basically, this is all a bit cheat, because I know for a fact that I will have put a load of weight on for the following reasons:
* Eating lots of wedding buffet
* Eating wedding cake
* Drinking copious amounts of beer
* No exercise for the whole weekend
* Being cooked for by a very lovely and generous mother in law who makes us goodies like English Breakfasts and tasty, huge roast dinners.

So I’m not even giving the wii the satisfaction of shouting at me. On the plus side though, I wore ‘the’ dress for the wedding yesterday and received numerous compliments from my husband’s family, many saying I looked really good and had I lost weight? Confidence boost all round, even though I know the fat belly is trying to make a reappearance! 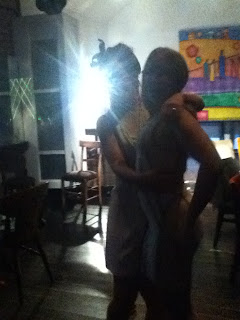 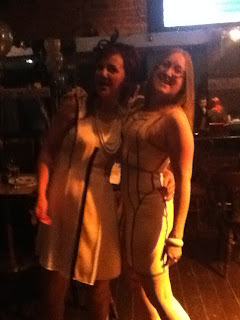 What do you reckon? I’m pulling a bit of an odd position because we were being daft while this photo was being taken. The blushing bride is on the left and that’s me on the right…

Congratulations to my Diet Buddy, Jane on her loss this week! Cheryl is still on holiday, so I hope she’s having a lovely time!