After a function this morning, we were looking for somewhere to have a spot of lunch. We happened to be passing The Railway Inn at Glenfield and so decided we’d pop in for a bite to eat.


The pub doesn’t really look much from the outside, but there is a lot of parking, and round the back they have some picnic tables and also a great wooden shed-like structure which houses a number of tables – no doubt a great resource for smokers in the winter! 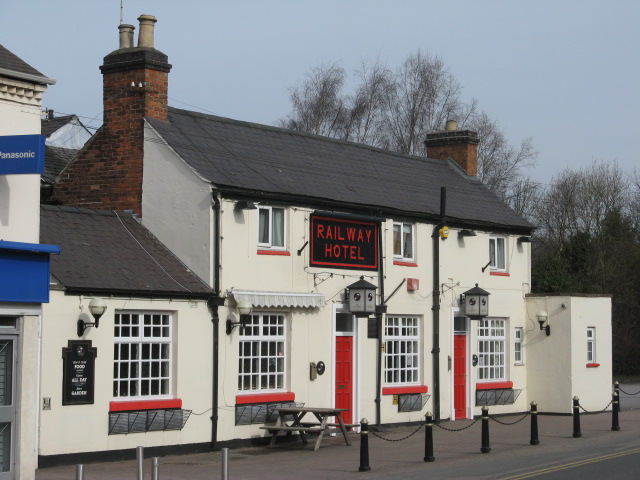 However, inside the pub is spacious and feels freshly decorated. It’s all a bit Habitat, with large print floral wallpaper , but nice enough and comfortable. The pub was clearly clean and well maintained inside. We received a warm welcome from the bar maid who was warm, friendly and helpful throughout our visit.


The menu was a home printed, laminated affair that was rather tatty around the edges but it promised homemade food and reasonable prices. The expectation was rather high as many of the menu items seemed to be promise to be made from scratch, which was weird because the menu is massive, with a huge amount of choice. It took us a long time to decide, but eventually we went for the two meals for £8 option.


The food arrived within about 5 or 10 minutes of ordering – awesomely quick as we were really hungry, worryingly quick in terms of the food being fresh and made to order… I had the chicken, leek and ham pie in puff pastry, with chips and vegetables. 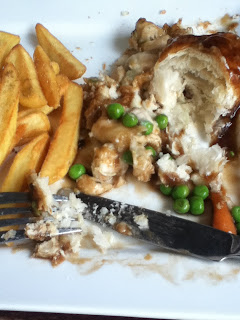 Evidently I forgot to take a photograph until halfway through… The pie was OK – there was a lot of puff pastry, at a ratio of about 3:1 versus fillig, so it was quite a while until I got to any chicken. There was barely any leek in the filling which was disappointing, but I am pretty sure it was a bought in pie rather than homemade. The chips and carrots and peas were standard frozen products. The meal came with a big gravy boat, with gravy granuales made up. How did I know they were granuales? Because there were big lumpy bits where it hadn’t been stirred enough to dissolve properly! There was a lot though, so The Boy could have some on his meal as well.


The Boy ordered the Sirloin Steak with chips and veg (Sirloin, on a 2 for £8 menu?) and it was awful! The first one came, ordered rare but was cooked through to dryness. This was probably because it was so thick, and weirdly pale, that it actually looked like a pork steak! 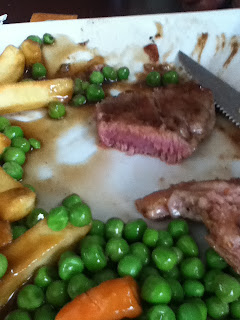 The second one was ‘cooked to order’ and came out about 4 minutes later. This one was better, but still very weirdly pale. Actually it looks way better in the photo than it did in reality, a lot more colour to it. No blood though, which you kind of expect with a rare steak. I think it made the Boy feel a bit sick because it was so anaemic, but he soldiered on and ate it anyway.


So all in, the food is very reasonably priced, the staff are friendly and the pub is comfortable. However, this is a case of you get what you pay for. The strengths of this pub menu, from what we could see, are things that you can pull out of the freezer and deep fry, as processed food always comes across the best when everything is bought in frozen. The drinks prices weren’t too bad though, we paid £3 for a pint of Fosters and £3.30 for an Old Speckled Hen. Overall I’d give the Railway Inn 3 out of 10 Extreme Points, but next time we’ll just go there for a drink!