We have lived in Leicester for a good 8 years now, and in that time is has been clear to us that the Globe is a local institution. Sadly, it has been in decline in recent years – it truly seemed to be a victim of the smoking ban as that was a noticeable turning points when the crowds thinned and the atmosphere slipped away (metaphorical atmosphere, not the smoke). So there were some worried looks when the doors finally shut a couple of months ago. Was this another historic pub, closing forever?

Happily, no! The Globe reopened last week after a facelift, some TLC and generally sensitive upgrading. It is now part of the same local group that run the Marquis Wellington – and you can see the top notch review I gave them incidentally just the other week on this blog. They are still an Everards pub, another great local institution. All the usual Everard Ales are available – my favourites being the Sunchaser and Beacon – although The Boy likes a pint of Original. They also have a selection of guest ales and ciders. When we visited, The Boy sampled the Everards Au which he gave a good thumbs up to as very refreshing on a summers day. As ever, the beer seems well looked after. 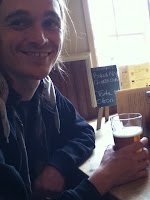 We haven’t tried the menu yet, but the pictures on their website look pretty good. As I always remember the Globe’s menu, it is traditional pub fare at a reasonable price. You never know, perhaps they will invite me in to sample its delights and then I’ll be able to write you all another review on the food! They do nachos – I hope they are on par with those you find at the Marquis! There is a poster on the exterior of the pub at the moment, proudly proclaiming that many of their ingredients are sourced from Leicester market – which is a great sign. Not only that they are buying locally, but also that the food may actually be freshly cooked rather than freshly microwaved! I wait to try it with baited breath!

We didn’t have a nosy upstairs so I can’t comment on the refurbishment, but downstairs it was all pretty good. They’ve added a dumb waiter around the back and therefore a partition wall which is a little uncomfortable in what was already quite a cramped space. We visited on a Friday straight after work and it was already getting quite difficult to get passed other punters in this area – I imagine it would get worse as it gets busier. While the decor is more magnolia, clean lines and decorative displays of teacups than seen previously, it does feel clean and airy – but just different! As The Boy said, if we’d never been there before we would really have liked it and settled right in. There does appear to be more of the original wood of the building exposed now, which is great and the lovely piece of stained glass at the back remains in place. Also, the real unique touch are the gas powered lamps on the wall – a lovely touch, although we though at 5.30pm on a sunny afternoon it was a bit odd that they were lighting the lamps and putting candles out on the tables!!

It’s great to have the Globe open again. It was lovely to see so many people coming in, just like we had, having a little nosy round and exclaiming on the changes before settling down for a quiet pint. I truly hope it is a success and that the Globe recaptures the great spirit I remember from when we first moved here. I’ve had birthday celebrations here, and I even came here in my wedding dress, in between the ceremony and the reception. I hope many more people get the chance to make fun memories here like we have. Ten out of Ten Extreme Points, if only for the nostalgia!