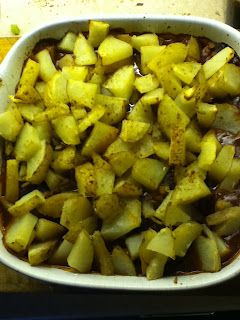 I’ve had a bit of a splurge, when it comes to fairy cakes and beer today! Therefore, I’ve got home and quite wanted to make something vegetable based and slightly healthier for tea tonight, that will have leftover portions for lunch (and beyond). This is what I came up with, a sort of Spanish-inspired vegetable (and chorizo) bake dish. I really enjoyed it and the portion size that I thought would do 4 meals will actually do six as it is so filling – good news! As ever, the measurements in this recipe are approximate because I never measure anything and you shouldn’t either.


* Put your chopped potatoes on to boil for 20 minutes
* Preheat oven to 200’C.
* Meanwhile, heat up a pan and add a squidge of olive oil. Add the aubergine and lightly fry down for about 7 minutes until they begin to soften. Add the chorizo about halfway through so it starts to cook down and release its lovely juices. 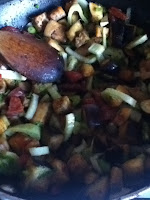 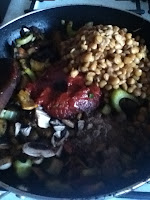 * Pour the aubergine vegetable mixture into an oven proof dish and top with the drained, cooked potatoes. Sprinkle with paprika and a glug of olive oil. Put into the oven for about 25 minutes, until the potatoes start to brown. 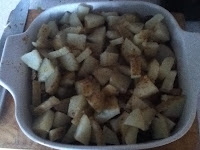 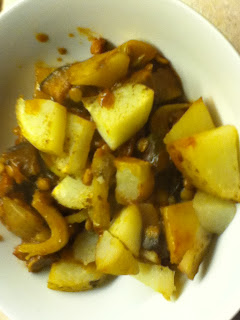 Take out of oven and eat, preferably with crusty bread. Nom. I enjoyed mine with some spelt and pumpkin bread. I found there was a nice mixture of textures, a good kick from the spices and nice bite from the occasional piece of chorizo and some good fillers from the potato and lentil. Definitely a winner for me, give it a go!