We spent Saturday night at the Marriot on West India Quay, as part of a prize I won. Therefore it didn’t cost me anything to stay there, but the Marriot have no part in my writing this review either. We’ve been lucky enough to stay in a few hotels around this price bracket over the years, so I feel relatively well qualified to comment on the level of service we received. Our room cost £149 for the night.


After being told in no uncertain terms by the receptionist that we would not be able to check in before 3pm, 3pm was the time of check in and if we thought there was the slightest chance we could check in before 3pm then we were kidding ourselves, we decided to start our visit having a drink and some lunch in the Marriot’s Manhattan Lounge. After waiting for about 20 minutes in a lounge that was empty except for our table, the waitress finally came over to take our order. This complete inattention from the staff continued throughout our stay.


I finally had a nice glass of Shiraz (£6.25) and The Boy enjoyed a pint of Stella Artoios (£4.00). We looked through the food menu and decided that we fancied the Burrito from the main menu. I noticed that it didn’t mention any sides came with it so suggested the Boy and I split a portion of fries. Turned out this was the right decision!!! 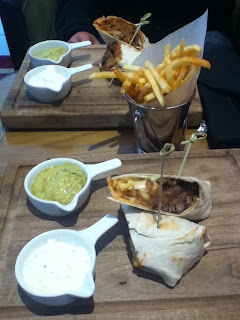 The food arrived and the burrito was very nice – big chunks of steak and some quite tasty and well seasoned beans. It was served with the oiliest serving of guacamole I have ever seen in my life, literally swimming in oil and no taste of fresh avocado in the slightest, and some sour cream, which was unremarkable. At £10.95, I think the Marriot could be over valuing their food ever so slightly. I think that about £2.95, maybe £3.95 would have been reasonable. And at £4 for this little bucket I think we were both slightly surprised at the quantity of fries we received. We came to the conclusion that the lounge bar was priced in the ‘more money than sense’ category and thanked our lucky stars (literally) that we weren’t paying. We were then left to enjoy the view of our dirty plates for a good half an hour or so, even though the waiting staff managed to come over and check that we needed our drinks refreshing and eventually, bring us new drinks. Perhaps they thought the sight of our scraps would entice other guests into ordering food. 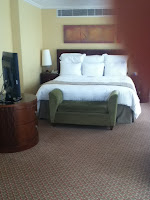 The afternoon arrived and we were allowed to check in. We went up to our room and had a very pleasant surprise. It was extremely sizeable, with a king sized bed and very pleasantly decorated. I found the bed to be extremely comfortable – both the mattress and the pillows were very soft and you sunk right into them, which I love and felt very decadent, but perhaps not so good if you are more of a firm bed fan! We were in room 414 which was a corner room and meant that two walls were full of windows which was rather funky. We had a flatscreen TV, ample tea and coffee making facilities which included china cups as well as two takeaway cups with lids, which I thought was quite a nifty touch. 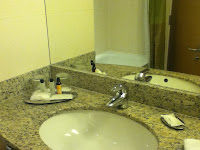 The bathroom was of a reasonable size, with decent toiletries and good soft bath sheets. All the extra touches that you would expect were there – ice bucket, wardrobes with lights in (!) and tonnes of hanging space), hairdryer, stationery and so forth. Even a choice between the Gideons Bible and the Book of Mormon lol. The only problem with the room was that we looked out literally directly on to a DLR station. There were nets on all the windows so being overlooked wasn’t a particular concern, but the battery whine of the DLR coming and going was really quite annoying in the background and went on well  into the evening, starting up again at some godforsaken hour of the morning. 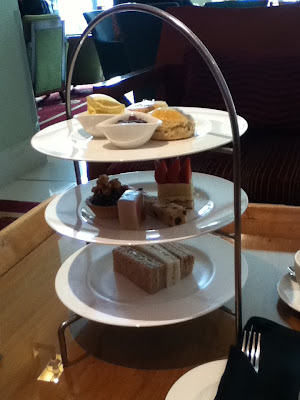 We had more experience of the food that the Marriot had to offer also. We took afternoon tea on the Saturday afternoon, which I was particularly looking forward to. At £25 each for a champagne tea this was not cheap, so I was expecting great things. First we were given a Prosecco Bellini each, much to my confusion. Given that the menu clearly stated regular afternoon tea was £15 and tea with a glass of Champagne was an additional £10 I most certainly was expecting actual Champagne and not Italian fizz, especially not with peach puree in it! Our tea tray came out and again was a little disappointing – in particular the three finger sandwiches. We mused what would happen if you ordered afternoon tea for one – do you just get 1.5 tiny fingers of sandwich??


Anywho, later on, we got a new waiter and he offered us additional sandwiches, which was well received, but a bit late since we’d already started on our cakes, but nevermind! The sandwiches we got were egg and rocket, coronation chicken and plain smoked salmon. Not a show stopper, but they did have the crusts cut off. Next we had our scones. By the time we got to them, we couldn’t tell if they had been warm or not, as per the menu, but the jam and clotted cream were very nice. I think this was the nicest part of the tea, with a good glaze on the scones. Then we had the cakes which were ‘specially prepared by our patissieres’. This special preparation included slicing some Battenburg, cutting a quite dry, but cinnamony fruit cake into a finger shape and making crown shaped biscuits like the ones you used to get a primary school and icing them  quite badly. There was also a sponge cake with some strawberries on, which was nice, a little chocolate tart with gold stars and (weirdly) toffee popcorn on top and most amusingly, a shot glass of trifle which we had absolutely no means of eating. The teaspoon with our cups was too big to put into the glass so we ended up having to get out what we could with our fingers! Not very dignified! 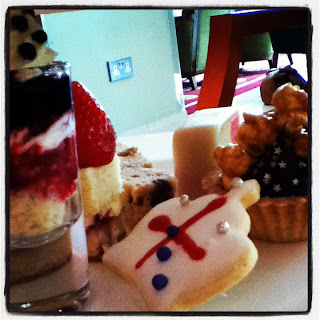 So we enjoyed the afternoon tea and because we only got one of each cake, we shared them all and enjoyed each little mouthful. I wasn’t sure that I was particularly impressed by the French Patisserie but that’s perhaps because I bake myself and know that there was nothing technically interesting in the bunch. We did notice that the Browns restaurant, literally next door to the Marriot was also offering Afternoon Tea At £23.95 for two people with champagne (actual champagne according to the menu, not prosecco) this would probably have been a better bet and half the price to boot. I’ve not tried the Browns on West India Quay, but the one in Cambridge was always excellent quality.


The other experience we had of the catering was the breakfast. Because we had to leave so early, the breakfast buffet would not have started so we were told to order room service. An eye watering £19.50 each plus £3 ‘trip charge’ later and we had a basic cooked breakfast, very much cold by the time we received it, a selection of pastries, a glass of juice and a small pot of tea. All this extra expense because we had an early start, which I wasn’t impressed with at all.


So all in all, a nice enough hotel. If I was paying £60 a night for a double room and maybe £10 each for afternoon tea I would have been very happy to stay there on my own money. As it was I found it extremely over priced and poor value for money with very low standards of service. We were going to have a drink there in the evening and were told to take a seat by the bar staff instead of being served there and then. After 20 minutes waiting for someone to come and take our drinks order we decided it wasn’t worth it and went elsewhere. On that basis I can only think to give the Marriot West India Quay 3 out of 10 Extreme Points. It was comfortable but the service was extremely slow and usually lacklustre and in terms of bang for your buck, it was a lot of bucks in return for a damp squib. Save your money and stay at a family run B&B and you’ll have a much better time.