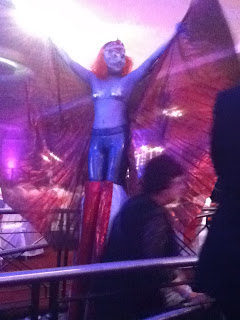 So randomly and without prior notice, we won a pair of tickets to attend the Miss England final at Athena, Leicester. Beauty pageants are totally and utterly outside of my experience, so it seemed like an excellent idea to go along, see what it was all about, rather than judge something I didn’t have any knowledge of.


At £50 a ticket, we were expecting something pretty special. Guests arrived, men in penguin suits and ladies in all manner of evening gowns. We were, naturally, a bit (but not too much) under-dressed. Ah well, no one was there to judge us, were they? I must confess that being immediately confronted by skinny types in St George’s cross bikinis, covered in silver body paint juggling fire or stilt walking did little to redress the stereotypes I walked into the event with.


We’ve been to Athena for mass catered events before, so when we were invited into the main hall and told that the starter was served, we knew we were likely to get a decent meal. And we were not disappointed. A vegetable tart for starter was simple and a little pastry heavy, but was served with a lovely beetroot coulis. 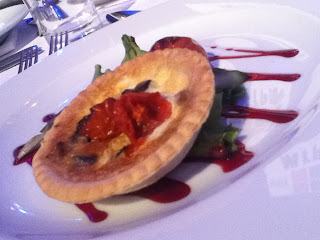 The main course was a roast chicken breast with a strip of bacon (pancetta? maybe) wrapped around it, a potato tower and green beans and cabbage. And weirdly, one singular tiny carrot. To keep you on your guard. The chicken was moist, the vegetables were nicely cooked – it was enjoyable. 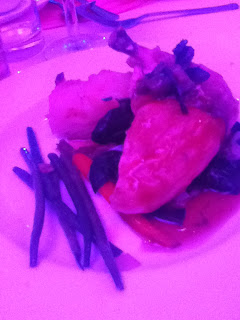 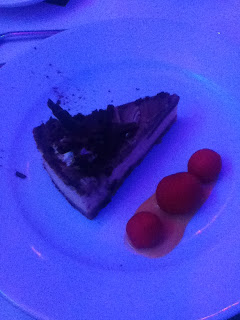 And all of this took place while the show was happening, sometimes seemingly in the background. I felt a bit bad for all of these girls, having their moment at the head of the catwalk, while we were more focused on trying to eat daintily in a dimly lit room without dropping gravy down our frocks. But the show did go on. Last year’s Miss England gave an extremely long and frankly bewildering speech about her experience over the last year. It seemed to boil down to two things – a. she’s had a lovely time and b. she had done lots of charity work. Unfortunately, it was a bit rambling and confused and, dare I say it, a little bit condescending towards the ‘poor unfortunates’ she’d helped through her charity work. I don’t think at all that was her intention to come across as such, I just think public speaking is not her key strength. I for one was pleased to have a meal to concentrate on so that my furrowed brow wasn’t pointed at the stage. 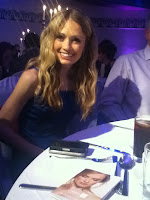 We were sharing a table with beautiful and intelligent Katrina, the model for Helen E Cosmetics who took to modelling after recovering from cancer. She was a strong woman, and very interesting to talk to. I couldn’t help wondering why someone like her wasn’t in the running for Miss England – later it turned out that it’s probably because she’s too old. That certainly out me off the contest. I don’t see how you can put an age limit on beauty, talent, intelligence, community spirit and all the other things that I was given the impression the contest was promoting. 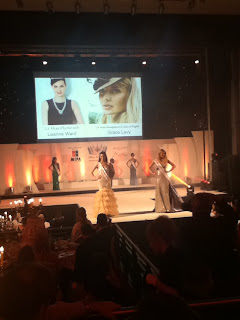 The show went on, the girls paraded out to say hello. Then someone who was on the X Factor once (but don’t hold that against him, he had a very good voice) performed while the girls paraded out again. Weirdly, some of the girls appeared to have been assigned absolutely stunning gowns, while a number of them appeared to have had their dresses chosen by a myopic old aunt. The Boy and I really noticed this because we realised we were just looking at the clothes – not the girls, or their deportment, or anything – just purely judging them on their outfit. How shallow are we? Or not? I don’t know.


Then, guess what? The girls paraded out round the stage. Again. This time they were wearing tiny shorts and t-shirts with the Mauritian tourist board logo on, one of the sponsors of the event. They had little flags with the logo on as well. They had to wave them literally the entire time we were treated to a traditional Mauritian music and dance piece. They must have had very tired arms and very tired cheeks from holding the fixed smiles for that long. I felt a bit bad for them. I liked the performance though, the drumming was awesome and the clothes were cool. It was my favourite bit of the night. 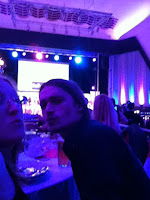 Then the final 17 were announced. It was a time of great excitement. The Boy and I were surprised that we weren’t in the running at this stage of the competition. At this point, each of the finalists was asked a question. Hearing their answers was very much like the experience I was expecting. Obviously dreaming for world peace is out of fashion – but having confidence and passion and helping others are still very much de rigeur when it comes to answering absolutely any question on any topic ever.


Unfortunately, what with the three course meal and the endless parading, it reached a time where we had to leave to get the last bus home – thanks for your conveniently timed service First Leicester – not. So I imagine that someone was picked as the winner. I gather from Twitter that it was Miss Devon. Well done Miss Devon, I can’t remember which one she is, but I hope that public speaking is one of her stronger points.

I have now been to a beauty pageant. I was a bit sad we missed the previous rounds (held over the previous 3 days, including a swimwear round and also a sports activity which we were shown a video of). I haven’t got a clue what I think about Miss England and its portrayal of women. The event was very corporate and certainly hugely commercial, but at the same times it was clear that it was very important to the participants and that they truly wanted to win. And so if it makes them happy, then who am I to judge? No-one, that’s who. But if Miss England is all about passion and hard work and confidence, I can’t help but feeling it should be open to whoever wants to enter – because those admirable qualities do not have limits, whether those limits be imposed by age or weight or anything else.