The more observant of you may remember that the lovely folk at Gardening Express sent me a bundle of plants to review at the end of last year. I thought perhaps it was time to give you a little update on their progress, as well as letting you know how the rest of this year’s vegetable crop is getting on.


Unfortunately, as I had guessed at the time, it was a little late in the year to get new plants established in the garden, so we did our best to over winter them in the house or in the greenhouse as appropriate. The Skimmia ‘Magic Marlot’ did well and gave us lots of joy from its pretty flowers. It made it through the winter, only to give up the ghost in early Spring – just as I was preparing to plant it out in the border sadly. This is a great value little plant though which I would really recommend for adding some vibrant colour. 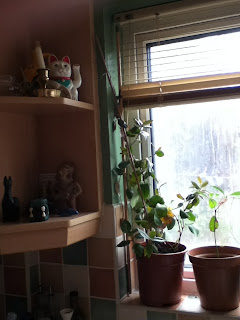 The other plants did not make it through the winter, so we only had two short, but beautiful months of enjoyment from them. And the hardy warrior (and luckily my favourite of the plants!) is the Brazilian Dipladenia. It over-wintered in the house and is now happily putting out new leaves despite having being knocked over and de-potted by the cats on not one, but three occasions! I hope we will get treated to a couple of its beautiful vibrant pink blooms. I am tossing up whether to plant it out as I’m not convinced it would survive the winter in the border and I would like to keep it as long as possible. Unfortunately, Gardening Express do not stock the Dipladenia at the moment, but keep an eye out as they are always getting new and exciting plants in stock. At the moment I am eyeing up the Chicken of the Woods mushroom log, which looks so much fun, and the black grape vine – totally want to grow my own grapes! 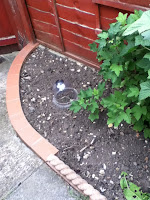 As for the rest of the garden, well after the enthusiasm and industry of early Spring, things have been incredibly slow. The epic amount of rainfall we have had meant that there is, if nothing else, a bumper crop of slugs and snails which have been eating my precious seedlings faster than I can grow them. My exciting new space, where we took out a rubbish mini conifer, and I hoped would have a giant and prolific courgette plant in by now, is the Barren Corner. I’ve put literally 9 or 10 courgette and assorted squash plants in there and they have all been eaten, right from under their cloches. Devastating stuff! 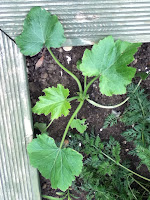 I do have a small selection of courgette and squash plants that made it through the slow moving gauntlet of the local slug population, thankfully, although the weird weather conditions mean that they are nowhere near as large as they should be, they do at least seem to be thinking about flowering soon. Not quite the glut I was hoping for from my first year of the raised beds!


Some other bits and bobs have struggled through the adverse conditions as well, my three little strawberries are growing quite vigourously and have started to produce a good number of fruits. A couple of other bits, although smaller than I would expect, are making it through – tomatoes, onions, leeks, radishes, beetroots, carrots, a couple of parsnips and 4 little cabbage plants. The perpetual spinach endures, unsurprisingly, and it looks like I got the pruning of my blackcurrant bush right as that has a good number of tight green berries ripening on it. There are a couple of sweetcorns that have survived as well, so that’s good news. Unfortunately, this year’s ambition of growing my first ever aubergine has been thwarted at every turn. After a promising start, two waves of seedlings have been gobbled up and I’ve now given up for this year. Maybe in 2013 I’ll have more luck. 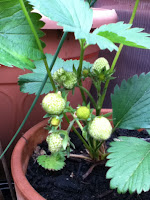 A surprise winner this year has been the garlic. I’ve never tried it before and just picked a pack up in passing at B&Q because it was reduced. I assumed it might be a bit late to plant it out, so just whacked it in the border and hoped for the best. And it is absolutely thriving! In fact, it’s getting to the point now that I’m worried they’re too close together – I had assumed that most of the bulbs wouldn’t even sprout when I put them in. If these all crop successfully I will be able to make my own Frenchy plait of garlic for wearing around my neck when I go cycling in a stripey shirt. Which we all know will look awesome. Go garlic go! 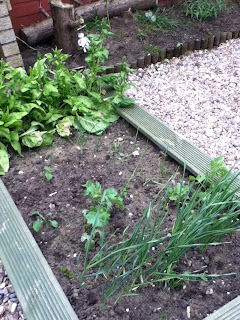 How are your gardens getting on? Has the weather been a blight on you as well?