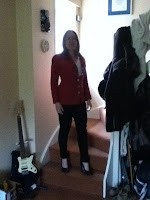 I have had occasion to wrestle with my inner slob this week and try to figure out a way to look smart. This was such a struggle for me that I had to bring in reinforcements for advice, reassurance, and to make sure my lager consumption kept pace with the amount of shops visited. I’ve definitely decided that shopping online is the way forward for me now, but you can see the outfit we settled on in the picture. I wore a Kenzo jacket picked up for pennies in a charity shop a few years ago and some new skinny stretch jeans from H&M for £9.99. More on the jeans below. Definitely worth a read if you’re considering buying some.

Whilst browsing through the Next Blogger Network website, I saw coincidentally that they had a feature on gentleman’s tailoring. This got me thinking about good tailoring, and wearing a suit and I wondered just what is workwear like around the world?


Having visited a number of countries, including India, I know that the Western ideal of the well tailored suit is a must in many business environments, with styles like the Nehru collared jacket having been popularised through Hollywood and celebrity culture. But does it have to be the way? Why is a tailored jacket our automatic recourse when we aim to dress smartly?


I had a little Google around and found an extremely interesting article about a Reuters’ poll on workwear attire attitudes around the world. It shows that Asian countries tend to have a higher percentage of people wearing ‘smart’ work attire, suits and the like, than Europe or the States. Predictably, 45% of employees think that casual attire increases productivity – a concept that I wholeheartedly agree with. Most amazingly for me was the slide that read 56% of employees think it would be acceptable to wear a bikini or speedos to a company beach party. Now setting aside the fact that this is England and the idea of a company beach party is more alien than Bruce Forsyth hosting Robot Wars, I just simply can’t imagine getting that up close and fleshy with my colleagues! Perhaps its a cultural thing, but I think I’d draw the line at a light cotton dress at a company beach party…


Naturally, this line of enquiry led me to reading about etiquette abroad instead of what I was originally looking for (damnable internet), but I still quite enjoyed that. Although it was a bit weird that they said the Spanish spoken in Argentina is weird and sounds like Italian. It really doesn’t. I am pleased that I know for definite now that slurping is a Japanese way of showing appreciation for food. Having hung out with Japanese people quite a lot, that was always a bit mad – but I shall join in with gusto next time! I enjoyed the quote about Panama – “Expect a little confusion if you’re a business woman attending a meeting. Be clear you’re representing your company.” – I wonder if that still holds true? I’ve found Central America to be reasonably progressive in the gender stakes!

And back to the black jeans. As I mentioned, I bought these black stretch, skinny jeans from H&M for an important business engagement. I took a friend with me to adjudicate when I tried them on and we both agreed the fit was good and they projected the image I was looking for. So the day of wearing came and I put them on. However, within an hour of having them on I realised they had two faults. One was what I would call a major fault. Firstly, once I had sat down once (something I did not think to check in the chairless changing rooms) the knee area went all baggy and saggy – very odd for something in a stretch fabric and not great when you’re trying to project a professional image. The second flaw, certainly more major in my book, was that the cut of these particular trousers means that they don’t stay on. As I said, I tried the jeans on and had independent confirmation that they fit well. However, as soon as I tried to walk anywhere, fast or slow (and trust me I experimented to try and get the darn things to stay up) they slipped down your legs and hips. I realised that half the time the back pockets were slouching around my mid-thigh, rather than crowning my peachy ass. And so, at great inconvinience, general panic, additional expense and annoyance, I had to abort mission, hotfoot it back home as quickly as possible, with one hand apparently nonchalantly in pocket but actually attempting to hold the stretchy buggers in a vice like grip that STILL didn’t keep them up. I got changed and just made it back in time to get my train for said vital business appointment.
Amazingly, the shop assistant at H&M was not having any of it when I tried to return these useless trousers. As I had worn them, they were not in a saleable condition, therefore I could not have a refund. No hint of an exchange was offered in case the cut of this particular pair was faulty. I’m inclined to think she knew they were crap trousers and that I would have similar difficulties with a replacement. Weirdly, if I was offered store credit, I would have bought the £29.99 pair that I was looking at when I first went to the shop, so by being obtrusive she did the company out of an extra twenty quid.
She continued to repeat her mantra that the trousers were not in saleable condition, usually cutting me off when I was trying to explain to her that a. I had been sold a product that was fundamentally not fulfilling its purpose, that is keeping my arse covered so therefore I would like my money to be returned, and b. I did not expect her to resell those particular trousers anyway, because they are faulty, in that they are unable to act like trousers and have weird baggy knees, which is not characteristic of skinny fit jeans. I also tried to reason with her that if I hadn’t ‘worn’ the trousers, I would have no idea that they were badly made and not functional in respect of being a pair of jeans. Indeed, had I kept them in the H&M bag, or perhaps framed them and hung them on my wall, I would still be completely satisfied that I received top notch value for my £9.99 expenditure. Perhaps that was what she was expecting me to do. Perhaps it is I that have been labouring under the misapprehension that H&M intends you to actually wear the clothes you purchase, possibly even during day to day life. If that is the case and H&M intends you to simply look at, but never wear its clothes then I retract my complaint.
After about 5 minutes of her talking over me, I decided to give up on a bad job and leave. So now I have one pair of faulty trousers that I can’t get rid of, nearly made me late and are frankly a plain nuisance. And I am £9.99 + additional transport costs lighter for the privilege. Next time I have an important business occasion, suffice it to say that I will be wearing something tried and tested, casual and comfy. And anyone that doesn’t like it can choke on their cummerbund.