Do you ever feel like you waste too much time on the internet? Do you wish you could do something engaging and meaningful but yet still ultimately as pointless as collecting badges on FourSquare? Do you like really old things?


Then the Ancient Lives website is for you. Part of the Zooniverse series, where you can take part in real science and humanities projects online, Ancient Lives is the modern day incarnation of the study of the hundreds of thousands of fragments of ancient documents found at the Hellenistic site of Oxyrhynchus, in modern day Egypt. 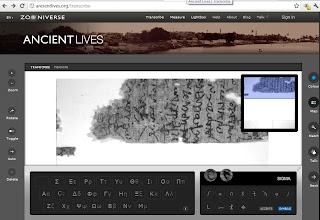 Take a short tutorial and you will be able to help transcribe real, as yet undeciphered fragments of ancient Greek papyrus. You could be working on a previously unknown gospel, an ancient letter or even a lost fragment of Greek philosophy. For someone as obsessed with the ancient past as me, this site is absolutely compulsive. Plus it’s helping me to understand the construction of the Greek alphabet much better. That’s almost certainly not going to come in useful, but I will waste many, many more hours transcribing these tiny, ancient letters.