Live Below the Line: Day 2 Lunch and Dinner

I am coming to the end of day two now. My dinner is bubbling away on the stove and I have nearly completed my second day. Today has been trickier as I was back at work, and more to the point today was a rubbish day which meant I spent a lot of time walking and cycling back and to between sites than I had expected. I think I probably clocked up about 10 miles on the bike, when my normally commute (if I get to just sit in the office all day) is just 6.6 miles. I have definitely been feeling hungrier.


The rice issue was *finally* solved this morning by stopping in at the local Aldi on my way in to work. I was annoyed to find that their value pasta was 1p cheaper than Tescos. I bet that 1p will be missed come Friday.


By the time 12pm rolled around, having had a shitty morning, no time for a life affirming cup of tea and lots of general hassle I was definitely counting down the minutes I knew that I should hold off eating my lunch as long as possible, to eke out the benefit of not feeling hungry for as long as possible into the afternoon, and hoping that the carbs in my cheapy refined white pasta would be as slow release as I hoped! I think I made it to 12.45pm before I finally caved in and zapped my lunch – the 2nd portion of yesterday’s lunchtime treat! 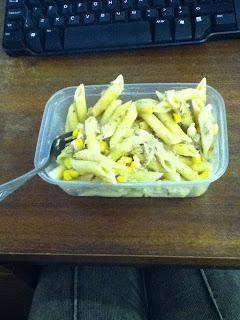 
As the day wore on, I found myself increasingly looking forward to my planned dinner time treat – Mexican rice. By the time I finished work, completed chores like going to B&Q for a new light for the kitchen (not something someone on the extreme poverty line could do – just shows how easy we actually have it when we are taking this challenge!) I got home tired and hungry. I’ve spent the last couple of hours since I arrived home trying to keep busy by doing chores, hoping that would pass the time so it felt late enough to eat with any likliehood that I’ll stay full until I go to bed and not feel peckish for treats and snacks later on. I’m not really a big snack person – if I don’t have stuff in the house then I don’t usually crave it too much, but I’ve already found that the deprivation element of this challenge is the bugger for making you want things more. After our meeting this morning a number of our colleagues went to the cafe for a lovely cappucino and a chat. I’ve already mentioned my morning was rubbish, so I had to dive off anyway. Normally that wouldn’t bother me in the slightest, I’d wave goodbye and head off, but today I did feel a pang of the green eyed monster at their foaming lattes and delicious homemade cake slices.


Right, off to see if my tea is cooked! This will of course be tomorrow’s Super Special Birthday Leftover Lunch as well… 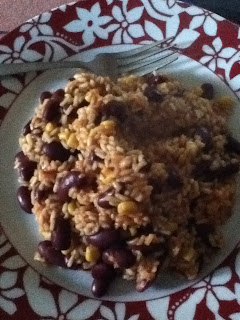 
Yes, it’s called Mexican because it’s got kidney beans in. What of it?


I have learned that 100g of rice is a bit too much for a portion though. For the first time I’ve been weighing carbs out, so that I can give accurate calorie values and costings, but as soon as this got cooking I could see I had definitely over-estimated! There was no clear indication on the packet what a recommended portion was though, and since I never cook for one, I think I was way out of my depth! However, I managed to eat it all (just) and now looking at the calorific value, I’m glad I did!


I’ve also remembered just now that I was so eager to eat my dinner, I forgot I was going to swirl in a little soft cheese as an extra added treat. Ah well, that will make my birthday lunch so much more special tomorrow!


And the scores on the doors today are:


A similar story to yesterday then. Low calorie intake, very low fat levels. Today I have eaten just 56% of my daily recommended calorie intake. If I were to continue on this diet indefinitely, I would lose weight very rapidly – I think something in the order of 1lb every 4 days or so – something even my fat belly would not be able to sustain for very long. And that’s the terrifying thing about Live Below The Line. I’m spending £1 a day on food and drink – but not including bills, education, healthcare and clothes and everything else that needs to be paid for. But there but for the grace of god go I. A sudden redundancy, unexpected illness, flash flood – there are a lot of random things that can happen to any one of us to put us below the extreme poverty line. I’m not sure now that I’d be able to obtain enough food to survive for long – and that’s the position that 1.4 Billion people around the world are in right now. Did I mention that I’m doing this challenge so you all sponsor me and help to do something about global poverty?


Fact of the day – I read on Twitter that in the war against Iraq, the USA has spent enough money to obliterate global poverty for at least a decade. I can well believe that to be true. Food for thought.