The more observant amongst you will have noticed that I haven’t blogged this month, except for Silent Sunday posts. If you’ve been checking in to my blog for a while, you may also realise that this can only indicate one thing – I’ve been making another big artwork!

Last year I made the Mona Lisa out of toast for a Japanese Nippon TV programme called “ITTEQ: Challenge the World” with a trio of actresses known as Morisanchu. Well, about three weeks ago they called me up to see if I fancied doing something else with them! Unfortunately, this time I did not go to Italy – we did the new mosaic in Leicester! However, that did mean I didn’t need to find a cat sitter, so that’s all good! Plus we could get a taxi home to our own beds at the end of each day which I also enjoyed.

As usual, I had to design the mosaic: taking the photo, reducing it down to the requisite number of squares and then allocating each square first a colour and then finally, a letter.


Because we were using cupcakes, this meant that I had complete freedom in terms of colour, indeed, Crumbs and Doilies, who made the cakes, were even able to match the colours via Pantone references for me!


I ended up with 14 different colours, the most complicated palette I have used for any of my artworks so far. I liked having lots of colours, because it really made the final work vibrant, however part of me thinks that being able to pick whatever colours you want takes away some of the challenge!!

We laid the mosaic out in Leicester, it took three days, but this was mainly because we had to keep stopping for the filming! The actresses went off to do an indoor bungee jump for their ‘activity’ for the programme, and on Sunday morning we finally finished. It looked great, I thought the finished effect was really satisfying.

I think the only thing that disappointed me about the final experience was that the shopping centre we worked in said ‘under no circumstances could we give out the cupcakes’ – absolutely ridiculous. They were completely edible and would have been enjoyed by hundreds of people – we took some of the spares home that hadn’t been used (so as not to disturb the picture) and they are still tasty, three days on! (In fact I ate a red coloured one while I wrote this blog post). Such a waste (at least I presume they were wasted, we had to leave pretty quickly after the mosaic was finished due to a prior commitment – if you were there and you managed to take a load and eat them, let me know!!). 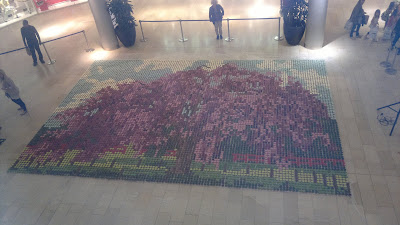 However, I’m still pleased that working on this brought so much money from Japan to small English businesses – the cupcake makers, the guys who hired the lighting, the people who hired the barriers – they were all small businesses. And of course, how can I forget to thank the Crumblin’ Cookie for the fabulous breakfasts each day – without which the army would not have marched on its stomach.