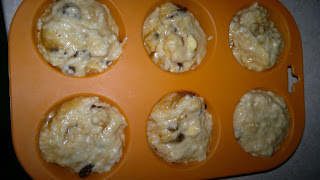 I fancied a spot of Sunday afternoon baking today and thought it would be a good opportunity to use up some of the stuff hanging around in the cupboards. I noticed there was quite a bit of mincemeat in there, and for some unknown reason, quite a large amount of unopened jars of jam. I had a little Google around and saw some interesting recipes for mincemeat cakes and though that this is the sort of thing that would work for both the mincemeat and the jam. 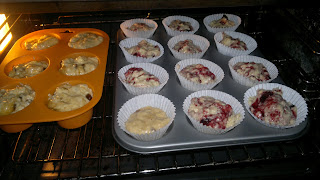 There was also a big pack of pearl tapioca in the cupboard which has been there for a while, but I couldn’t find anything particularly interesting to do with it except for Tapioca Pudding so any ideas of what to do here would be gratefully accepted.
Anyway, on with the recipe!
Quick Muffins (makes 18 small)
Ingredients:
260g self raising flour
1 tsp baking powder
1/2 tsp salt
180ml milk

75g of baking fat (cheaper than anything else!) – gently melted
1 egg
85g honey
A couple of drops of vanilla extract
Approx 60g (2 big dollops!) each of jam and mincemeat.
Method: Set the oven on to preheat at 190’C. Mix the milk, melted baking fat (cooled), egg, honey and vanilla together in a bowl. Add the flour, baking powder and salt and mix very slightly until nearly combined. Separate half of the mixture into a different bowl. Add the mincemeat to one bowl and mix lightly until marbled through. Do the same with the jam in the second bowl of mixture. Spoon into cake cases or muffin tins and bake in the oven for 20 minutes. Watch them though, as you can see, mine nearly caught at the back!

This mixture makes a light muffin mix, not overly sweet – which means the jam is a nice counterbalance. The mincemeat ones are quite delicately spiced. The Boy was impressed that the muffins were so light and airy. He gave them a whole 10 out of 10 Hippy Points.