Carrot and Beetroot Cake, with a Leek Quiche on the Side

I’ve been on my deathbed today, suffering from a severe bout of manflu. Determined not to let it get the better of me, I have been trying to engage in fun activities for that peak hour when my paracetamol has kicked in before having a three hour sit down before the next paracetamol dose. 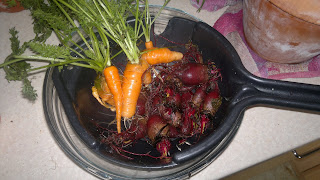 The first bout of frenzied activity involved me finding a way to use up the last of the beetroots and carrots that The Boy dug up out of the garden yesterday, when starting to prepare the ground for the new year of growing. Of course, when faced with two good servings of fresh vegetables, there’s clearly only one logical thing to make – cake. I had a look round tinterweb for people’s recommendations and found that dark chocolate is supposed to go well with beetroot, so I thought I’d give that a bash. After that, it was a bit freestyle. This is mainly because a. I’m lazy and b. I’m rubbish at following recipes. Anyway, here’s vaguely what happened, although I’d trust your instincts to some degree as I never really bother to measure things out… (hence why I’ve left the baking powder out of this recipe transcription because I ended up having too much raising agent) 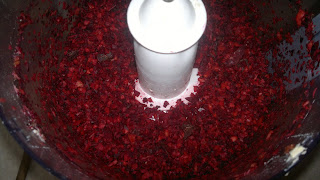 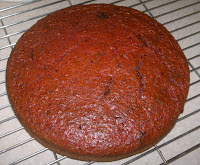 tsp all spice
150ml veg oil
2 eggs
Method
1. Preheat the oven to 180’C. Peel and roughly chop the carrots and beetroot and throw into a food processor with the dark chocolate. Blitz it down until it’s quite a fine, but coarse mix. Make sure there are no big bits left. 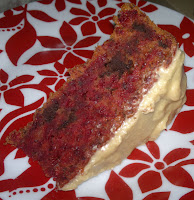 2. Add all the oven ingredients to the food processor and then blitz until the whole thing is combined. Pour into a greased cake tin and whack in the oven for about 35-45 minutes – until a skewer comes out clean from the middle.
Simple eh? I’ve seen recipes where you cook and puree the beetroot, or cream the eggs and sugar, but quite frankly my method seemed a lot easier. And it worked really nicely. The cake has got a really moist, and very light spongy consistency. I was really pleased with this. I whacked together a quick buttercream icing with twice icing sugar to butter and a tsp of milk.

Since I was having the oven on anyway and my over the counter drug haze showed no signs of wearing off I thought I’d whack in a quiche for lunch as well. Quiche is a really easy meal to whip up if you’ve got the relevant stuff in. The pastry is just half butter to flour, combined with a little water and salt to taste. The filling for this was leeks, courgette and garlic sweated in a little butter with a few lardons for good measure. While that’s cooking, whisk up the eggs with a good splash of milk and a big handful of cheese. Season, stick it all in a flan dish and stick in the oven for slightly less time that the beetroot cake. Nom. 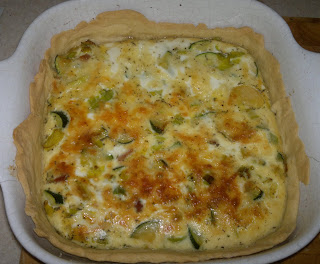 After lunch, a little rest and watching a crappy film with The Boy, I also got on to the garden. The parsnips and first wave of radishes have been sown out in the borders direct, but it’s still a bit cold for many things. So far, I’ve got hazelnuts, chillis, melons, onions, leeks and a couple of other bits starting off in the nice warmth and light of the kitchen, as well as some flower seedlings for the front garden. Fingers crossed for a bumper harvest this summer and a speedy recovery this weekend.