Fear not, my Big Project – the one that has been keeping me away from blogging for the last three months – is nearly complete. In one week I will be posting the final write up on that little artwork, so keep an eye out. In the meantime, since the bulk of the work has been completed I’ve had a lot more time to get back to my old favourites – crocheting and crafting. 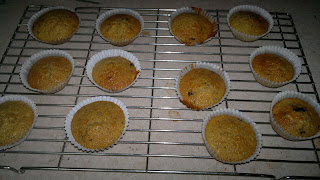 On Friday it was The Boy’s birthday and we have been making a long weekend out of the celebration. Today I decided it was time to make him his celebratory cakes. I’ve been following the online debate regarding single serving cakes with interest. There seem to be a number online commentators who have watched the decline of the great British fairy cake in recent years with absolute horror – my favourite quote being that ‘Cupcakes are the bastard cousin of the fairy cake‘. In essence, fairy cakes are smaller, and tend to be much more simply decorated, with a simple glace icing rather than a 7 foot thick layer of buttercream. On this basis I have realised that I fall down firmly on the British fairy side. I like a cupcake, but only for the first bite or two, after that I feel a bit sick.
Plus my mum was an expert fairy cake maker and I got a beautiful batch every year for my birthday, with half a glace cherry on top as was the style of the time. I still have never managed to perfect my icing into a circular blob on the top the way she could get it. I guess it’s all about where you’re brought up though. I read the US Bookworm’s Travels blog with interest:
“The UK doesn’t really have good cupcakes
(or “fairy cakes”, as they are sometimes called here).
Despite the cute name, they are generally heavy, dry, crumbly, and have poor frosting.”
After spluttering with rage for a brief moment, I thought about it from her point of view. If you’re expecting an 800 calorie, full fat extravaganza, a fairy cake probably doesn’t cut it. I don’t agree that they’re heavy or dry though.
As you may guess then, I offered to make The Boy some fairy cakes for his birthday. That’s the kind of wife I am. It is quite possibly me who wanted cake the most, but I let him pick the exciting twist. He asked for a plain sponge, but with some crunchy bits for texture, including some dark chocolate. So I created them using the following recipe:
85g butter
85g unrefined sugar
1 egg 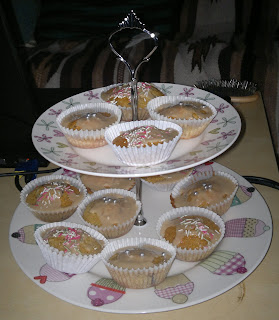 85g self raising flour
1/2 teaspoon of baking powder
splash of milk
handful of chopped nuts
small splash of orange flower water
About 50g of dark chocolate, smashed up with a rolling pin.
These quantities may not be exact in terms of being reproduce-able, but that’s what I used. Let’s face it, fairy cakes aren’t difficult so I’m sure you’ll manage if you want to give it a go. After 15 minutes in a 180’C oven, I left them to cool and then iced them with an unrefined icing sugar glace icing and set to with the silver balls and hundreds and thousands. If nothing else, it has been a chance to use my new cake stand (£3.33 from Tesco Direct – what a chuffing bargain).
While the oven was on, I decided to have a go at some baked croquettes as well, to use up some of the big lump of reduced Camembert The Boy picked up from Mr T’s the other day. Again, this doesn’t have proper quantities because I made it up. It contained: 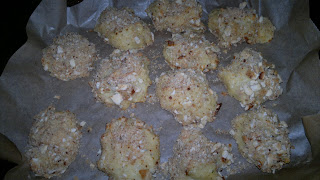 3 medium-large potatoes
A big lump of camembert
A small splodge of butter
1 egg
salt, pepper, cayenne and paprika
4 cream crackers, put in a bag and smashed with a rolling pin.

They were pretty yummy and are easy to make – boil your potatoes, drain and leave for a minute for the excess water to evaporate. Mash up with the other ingredients, minus the crackers. Put the cracker crumbs in a bowl and put blobs of the croquette mix into the crackers to coat. I put them on greaseproof paper on a baking sheet to make sure they didn’t stick. After about half an hour in the 180’C oven, they were ready. I served them with the last bit of leftover chilli from yesterday mixed with a tin of baked beans, some extra kidney beans and some added cayenne. It was very nom.

And in case you were wondering, I have sampled one of the fairy cakes and they are neither heavy, nor dry. Quite the reverse in fact.