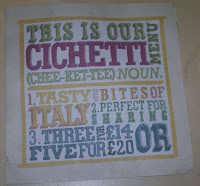 Tonight we were two of 16000 lucky individuals to have bagged a unique code for the Zizzi Cichetti hour. I really enjoy Zizzi‘s menu and there were quite a few thing on the new Cichetti menu that I was keen to try so I was pretty made up to get the code. Thanks very much to the lovely Zizzi Twitter account who were the ones I got the tip off from!
All across the country this evening, branches of Zizzi across the country opened their doors to hungry blaggers looking for free booze and free scram. And we were not disappointed. On entering we were given a free glass of the nommy Prosecco. Well, in fairness, it was more like half a glass of Prosecco, but it was free so I am given to believe that beggars can’t be choosers. The Boy and I did debate the merits of returning to the entrance to try and claim the other half of our ‘free glass’ at one point, but we thought better of it. I do enjoy the Veneto house Prosecco at Zizzi, it’s really light and quite dry and very fresh – especially with the creamy, rich dishes that I tend to pick.
But hang on, I hear you cry, what the Dickens was this ‘Cichetti’ that you were trying? Well, for want of a better description, the Spanish have tapas, the Greeks have mezze and now, apparently, the Italians have cichetti! They are small ‘tasty little bites of Italy’ by all accounts. At the time of writing, you can get 3 dishes for £12 or 5 for £18, so they work out a very similar price to a tapas menu elsewhere. At this evening’s tasting extravaganza, we were all stood up while two very hard working waitresses brought round various platters of samples for us all to try.
I’m a bit gutted that we didn’t get to try a little bit of everything. After our japes in Matera last Easter, I was really keen to taste the Steak Tagliata, as this was essentially the absolute best thing I ate over in Southern Italy. Had Zizzi proved to me tonight that their version was anywhere near as good, I would be OK with paying the £1.95 supplement for it, even for a small portion. However, clearly, they weren’t handing their steak out and I don’t know if now I’d be prepared to take the risk… We’ll see! That is a small gripe though, as is remembering we saw some King Prawns going round when we arrived, but we didn’t get in the room in time and seemingly that was it – gutted! But anyway, let us stop looking and the past with regret and look back at all the things we did get to try!
Randomly, at intervals we got to try calamari, prosciutto on focaccia and some Primavera pizza – all of which very much got my seal of approval (I chuffing love cold meats especially) but they aren’t on the Cichetti menu, so for the purposes of this post I say nothing other than they were all scrummy and I was glad they brought them round.
Ragu e Polenta
A big thumbs up from both of us here, but that was mainly for the crunchy cubes of deliciously fried polenta. The ragu topping was fine, but not particularly mind blowing. However, as a combination, this was really enjoyable. I was very surprised to see that this was the taster that most people in the room were refusing.

Bruschetta ai Funghi
One of my top dishes of the evening. Yes, bruschetta is simple – but the mascarpone sauce was creamy divine heaven. Lovely chunky mushrooms and crisp ciabatta gave a lovely texture, so overall I was much more impressed with this than I was expecting.
Arancini ai Funghi
Little deep fried risotto balls served with a tomato dip. This was the one I was most looking forward to trying as during my last Zizzi visit I turned this down as a starter and opted for the gnocchi instead (which I do not regret, the gnocchi with gorgonzola is divine!) I wasn’t disappointed – it was just as you expect, crispy on the outside and risotto-y on the inside! However, my husband and I agreed it was a little underseasoned – both the risotto balls and the tomato sauce dip – so it came across as a little bland. Perhaps more sharpness from parmesan would help in addition to the mozzarella? We were trying to imagine what it would be like simply as a risotto, without the novelty of being deep fried, and we concluded it would be no great shakes unfortunately.
Saccottini
One of our favourites was the spicy n’Duja sausage and rocket mini calzone. I was lucky to also try the vegetarian version and this was fine, but didn’t pack the flavour punch of the meat version. I think I’d definitely recommend this Cichetti if you want to be sure you’ve got one dish that will at least fill you up a bit! Lovely stringy cheese, great pizza dough, a very enjoyable experience once the filling had cooled to slightly less than molten lava levels.
Spiedini di Pollo
Essentially chicken and peppers on a stick. Did exactly what it said on the tin, the chicken was moist and enjoyable and the peppers were clearly very fresh and flavoursome. However, I didn’t get a hint of the rosemary and lemon described on the menu, I would have sworn blind that the two ingredients were oven baked plain! It was very nice, but I hope that speaks more for the quality of the main ingredients than everything else!

So there you have it! A very enjoyable experience on our part, as you can see. Hopefully they’ll do another night so we can try the aubergine, the steak, the meatballs and the Zucca al Forna…. Nom nom. Could be wishful thinking on my part though, and I will certainly raise a glass to Zizzi’s Cichetti Hour this evening. They were gracious and generous hosts.