I have been chatting to NPW Gifts on Twitter recently. They are a gift website that I haven’t come across before, but they do lots of funky things for pretty reasonable prices. I particularly like the focus on products they seem to have which are creative or art based. They have lots of different things which are suitable for adults and children alike. I mean, can any one of you honestly say that you wouldn’t want to receive your own balloon animal kit? Exactly. 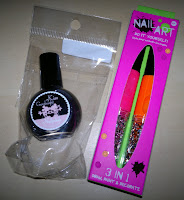 They invited me to try their 3 in 1 Neon Nail Art pens, which are available for sale at the time of writing for £7.95 for a pack of two pens. This was handy, because I’d recently bought a black, glittery nail varnish from H&M for the bargain price of £1.99 which would provide the perfect backdrop for neon colours. The H&M nail polish is in ‘Kiss Goodnight’.

It also couldn’t be a better time to invest in neon nail art pens, since the trend for bold, almost shocking colours shows no sign of disappearing over the next couple of seasons. 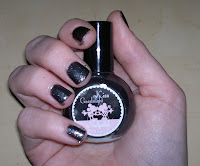 These pens are three in one, because if you unscrew the cap, you get a brush for painting your nails. If you pull the top of the cap off, there is a tiny nib for drawing more detailed designs. The third elements are the subtly colour matched gems in the base of the pen, which can be simply added to wet nail varnish for extra glam sparkles.


Because I’ve not had chance to practice with the pens yet, I thought I’d keep the design simple, just to get a feel for the effect. I started with a base layer if the ‘Kiss Goodnight’ varnish. As you’d expect from a £1.99 varnish, it wasn’t really thick enough to cover properly in one coat, but two layers did the job admirably. You’ll see from the mess I made of the black that I cut my nails properly short for the first time in months the other day, so it’s not the neatest job.


Next I added my detail. For some reason I found the orange applied much better than the pink – the pink seemed a little watery and I got some lines running into each other in places. The orange held itself much better. The pens are squeezable, so applying using the drawing nib is relatively simple, although I can imagine it’s something you get better at the more you practice. The main issue I found was that the lids on the nibs are so tight (presumably to keep them airtight) that it is a real struggle to get them off without smudging your nails!! I think I would have preferred just a slightly thicker texture as well, which would have allowed for thinner, continuous lines to be applied. However, that said I was pleased with the effect. They are really nice and bright on top of the black background. 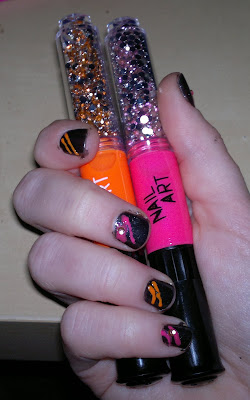 I added the gems to the still wet lines of varnish and they stuck fast immediately. It was a little tricky picking them up, but I found emptying some on to the table and licking a finger tip was an effective method of grabbing them without smudging what you’d already done.


All in all, I found the H&M polish to be average, but inoffensive, but the 3 in 1 nail art pens I am pleased with. I see they also do a metallics range for the same price which I’d definitely be interested in buying. I think that getting two pens for £8 is pretty good value and I’d rate these a seven out of ten Extreme Points.