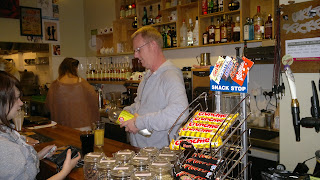 The Crumblin’ Cookie is one of our favourite local cafe bars. Yes, a cafe bar, meaning you can get cake there but also beer – huzzah!
The Cookie does a great Twitter presence if you want to follow them, but more importantly you should go in and say hello. You’re guarenteed a warm welcome, a good meal and, more often than not, some top notch entertainment.
They put on all kinds of events, from film showings, to live music, to Ann Summers parties (seriously, there was one going on upstairs while we were there this week) to comedy. In fact, they were voted the Best New Venue of the Leicester Comedy Festival 2010. Definitely one to watch, considering the festival will now be sponsored by the possibly illustrious comedy satellite channel, ‘Dave‘.
For those in the know, the Cookie also has a fabulous and spacious terrace on the first floor, which is great when you want to sit outside but away from the hustle and general criminal activity of Leicester’s High Street (I jest of course, the High Street is sound, but the terrace is better). 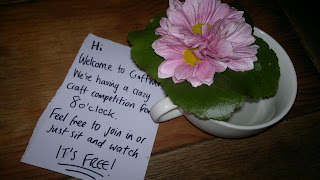 Last Wednesday we arrived to see this lovely arrangement upon our table. Yes, it was Craftwerk III, which feels like it should say ‘The Revenge’ or something after it. Craftwerk is a now regular evening at the Cookie where you bring a team of mates and are provided a theme to which you all have to meet as creatively and craftily as possible. Naturally, as this combines sticky back plastic and beer, I consider it to be a fitting activity for an Extreme Housewife to engage in.
The theme was Harry Potter – attempting to decorate the Cookie like Hogwarts ready for their Halloween film night and fancy dress on Monday. This probably put us at a slight disadvantage as if I had a flying fuck, I probably wouldn’t give it to that Potter fellow. He can probably create his own flying fuck anyway, being magic and all.
We had to (from what I understood of the instructions, me mainly being distracted by drinking pints at this stage) create a big crafty thing inspired by our allotted Harry Potter team (we got the Death Eaters apparently), with bonus prizes for the best team wand, familiar and themed fancy dress. There was also the facilities for pumpkin carving, which was the first thing to engage The Boy’s attention in proceedings all evening.
At the sound of the whistle. Or possible just when they said “go” there was a slight scrum at the table of crafty materials. Then the next two hours were filled with people trying to find the sellotape, trying not to PVA themselves to the table and not knock over any drinks with a roll of glittery paper. There was much general sticking out of tongues in concentration.
I naturally got engrossed almost immediately. It took me nearly an hour to drink my second pint I was so involved in the task at hand. It is absolutely tonnes of fun being handed lager and fun foam and being told to play with them. Why every venue in the country doesn’t do this sort of activity I’ll never know.
At the end of the night, every team was a winner and everyone was happy, if a bit over stimulated by free access to Sharpie pens. I was particularly pleased with my dragon familiar, which I thought was especially cute. The Boy had excelled himself via the novel yet surprisingly lifelike Hunter S Pumpkin. It was great, and having missed the first two Craftwerks I shall now make it my mission to miss them no more.

PS. This is not a sponsored post. We went, I liked it, I decided to blog about it.