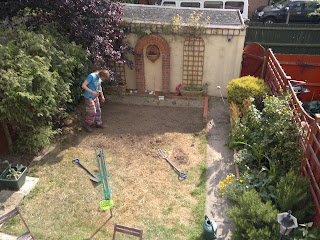 I came home from work the other day and the boy was digging up the lawn. It is rubbish and bumpy and makes the hover mower not hover. I can’t blame him for having had enough, I couldn’t even push the mower over it.
We had been talking about it for a while, and seeing my mother in laws shiny new (and huge) vegetable plot recently made us both a little jealous and actually pull our fingers out and get on with it. 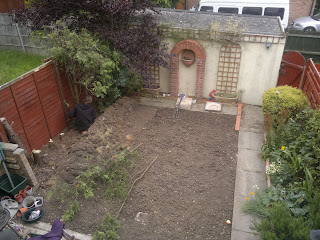 Once the lawn started coming up, it was clear that the remaining conifers needed to go also. Et voila, we had a much bigger feeling garden! The conifer side will eventually be dug out into another plain border, but after the epicness of this project, we decided to leave the turf pile on it for now (the Sod Sofa) and deal with that next year.
When everything had been dug up and dutifully piled in piles, there was a short pause while I got everything together to be delivered for phase 2… This is where the real hard work begun. Although digging over the rock hard lawn area was tricky in its own right… 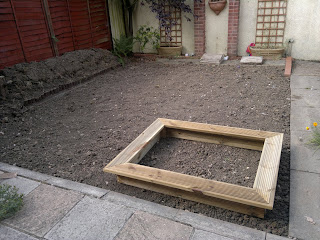 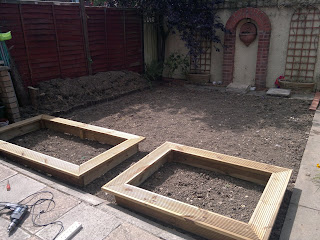 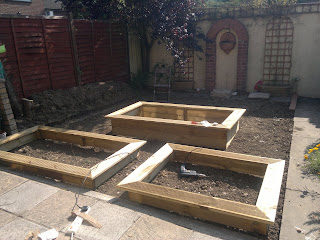 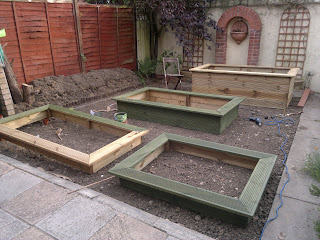 And the weekend screwing frenzy was augmented by raised bed number four, or the ‘Big Mama’ as we haven’t been calling it. You’ll notice at this point I was also treating the wood. And so, with heavily blistered hands, aching backs and general weariness of the overall body, we were finished and I was able to start my titivating. 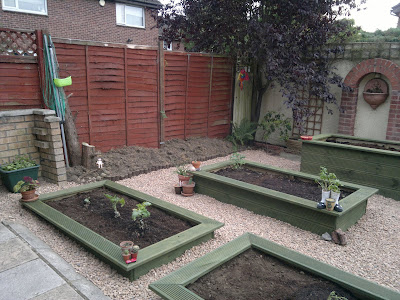 The final result looks amazing! The Boy has also constructed a small shelf out of bits of our old bench for plants to go in the brick BBQ that we haven’t go a grill for. I am so pleased. Essentially, apart from the digging over, we’ve got all of this done in three days. We’ve moved a tonne of gravel and a tonne of topsoil and somehow, I managed to carry a 125l bag of compost from B&Q to the bus stop. The Boy met me off the bus with a skateboard and we rolled it home, it was the only sensible thing to do. 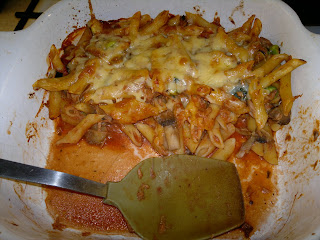 And is it all worth it? Yes, I have a garden I can be proud of, with more room for growing. And we love our veg. Here is tonight’s celebratory tea (which we ate outside of course) – a tuna pasta bake with courgettes and broad beans from the garden. All this and more can now be looked forward to from our beautiful, and hopefully prolific garden. Salut.