There’s an awful lot of alliteration in the title of this here blog post. Anyway, what have I been cooking today? Well, courtesy of the nice people at Very Lazy Foods, whom I was chatting lazily with on The Twitter, I have been making The Boy eat Chicken Chasseur. It’s tough for him. 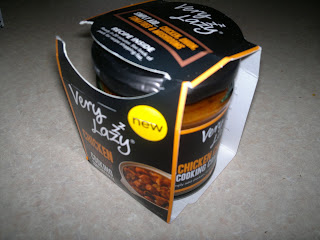 Very Lazy Foods are famous for their Very Lazy pre-chopped ingredients, such as Garlic and Ginger, favourite of students everywhere. Now they have expanded their range to deal with pastes and cooking concentrates. Obviously, there are quite a lot of these already on the market so I was interested to see how Very Lazy’s compared – if indeed it is quicker and/or easier. 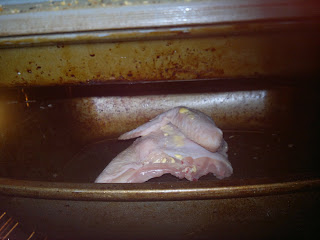 As previously mentioned, they sent me the Chicken Chasseur Cooking Concentrate to sample. A few more beers and me saying that will be hilarious. Naturally, being an Extreme Housewife, I had to make life complicated for myself. Instead of having chopped chicken breast all ready to go, I just had one mega-chicken breast, with bone, wing and skin. So, I roasted it first to pull apart and add to the sauce later. This added about 40 minutes to the overall cooking time, which shouldn’t be taken into account by anyone, ever, as this is not what Very Lazy suggest you do. 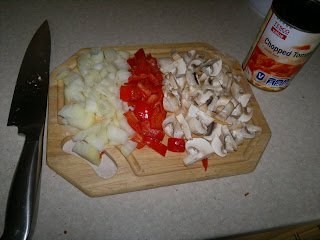 Anywho, while my chicken was cooking, I had the chance to get back to the actual recommended recipe, which is handily written on the card label around the jar of concentrate. I wonder if this extra packaging is strictly necessary, but then they are small jars. Fear not if you lose the little card also, as recipes are available on the website. 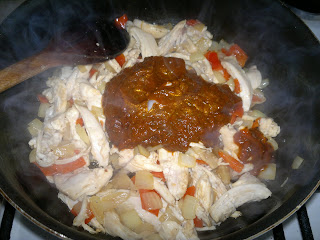 I chopped up my onion and mushrooms and once again could not resist adding my own touch of flair with a bit of red pepper. I figured that since the preparation time advertised includes a bit of chopping, doing some pepper at the same time wouldn’t make that much difference. It wouldn’t be Extreme Housewifery if I played by the rules. The veg, apart from the mushrooms was then fried up with the chicken and the concentrated sauce added and fried off briefly. 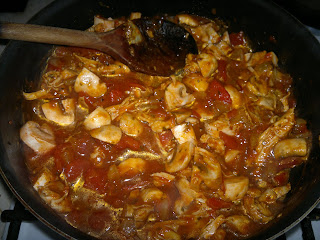 The next stage was to add a tin of chopped tomatoes and your mushrooms and that’s it! Leave to simmer for 10 minutes or so and a delicious Chicken Chasseur is yours for the enjoying. The label boasts that preparation and cooking time will come to a paltry 20 minutes and I believe this is entirely achievable, if you don’t fanny around stripping chicken off the bone like I did. I think this is the real bonus of this cooking concentrate, the prep time is so short. For myself, the ingredients on the label are nothing particularly unusual and the sauce is something I could knock up myself, but if you’re in a hurry there are genuine time savings to be had here.

“How does it taste?” I hear you cry! Well, not bad. It’s very tomatoey and quite sweet, but other than that a little bit unremarkable. It’s not a show stopper, indeed The Boy gave this product only a paltry 4 out of 10 Hippy Points saying it was far too sweet. I am more generous, giving 7 out of 10 Extreme Points because I can imagine the times when knocking up a meal that includes proper ingredients in 20 minutes would be a positive boon in my life.

The sauce cooked out really nicely. It looked a bit dry when I first had all the ingredients in the pan, but as the juice was released from the tomatoes and mushrooms it got quite a pleasing consistency. The smells were good and it certainly filled the gap, which is what you want when you can’t be bothered to cook from scratch! I’d be interested to try some of the other products, particularly the Thai Green Curry. I am more familiar with how that is supposed to taste, so I would trust my opinion more! However, for doing exactly what it says on the tin – making a Very Lazy, quick Chicken Chasseur but still with fresh meat and vegetables, I think you could do a lot worse than this product.

What do you think? Have any of you guys in Blogland tried this yet?