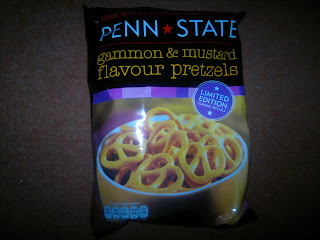 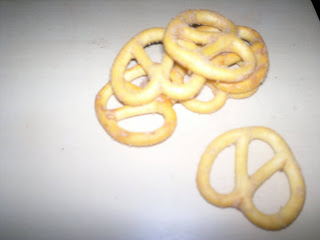 Those people at Penn State have been sending me more yummy snacks to try. I’m pretty sure that being off work for two weeks, hardly going to the gym and eating lots of tasty treats has not been the best lifestyle move, but I am committed to getting my nose back to the grindstone. Tomorrow. Honest.
So what’s the lowdown? We’ve got Penn State’s limited edition Gammon and Mustard flavour pretzels, which according to the press release ‘offer a tasty twist on a popular family favourite. Baked, not fried, and still only 131 calories per 30 gram serving, this limited edition and low fat flavour provides a healthier alternative to crisps and other snack foods.’
And I can confirm they are most nommy. I much prefer this flavour to the Worcester Sauce ones that we tried a little while ago. They have the great pretzel crunch and the flavour is not too strong. The gammon flavour is really good and mouth watering. There is only a slight hint of the mustard on your lips, which is good for me because I’m not the biggest fan of mustard. I think the overall taste is quite subtle.
These snacks are right up my street though, and I award them 8 out of 10 Extreme Points. The Boy, on the other hand was surprisingly unimpressed and only gave them 5 Hippy Points as he was not fussed on the flavour. And he likes mustard! The only problem I have really is that these are a relatively healthy snack, compared to others, but as they come in 175g, it’s virtually impossible to stop at the recommended 30g serving, so you end up ingesting a load of calories anyway!! 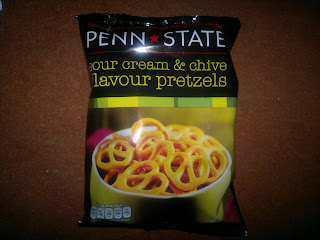 Penn State also sent me a sharing pack of Sour Cream & Chive flavour pretzels. These were my favourite flavour anyway – tangy yet creamy and altogether delicious with a clear and enjoyable chive taste. They even have a very appealing smell, but not overpowering and not too synthetic in feel. Sour cream and chive anything is always my favourite, so I have to give an unsurprising 10 Extreme Points. I am doing everything in my power to avoid sharing these with The Boy, despite it being a sharing size bag. There shall be no Hippy points awarded because they’re all mine!

If you want ’em, you can get the limited edition flavour from Waitrose at £1.29 for a 175g bag. Happy Snacking!