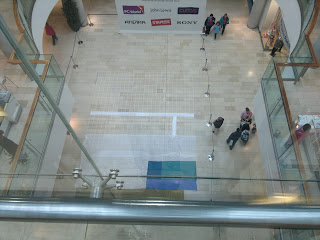 Today we made more Big Art. This time it was for the Highcross shopping centre, Leicester. It was a departure from the norm, being made out of fabric, saris, beads and wool. This was nice as it ties into Leicester’s proud textile heritage and the current industries. All locally sourced materials were used. 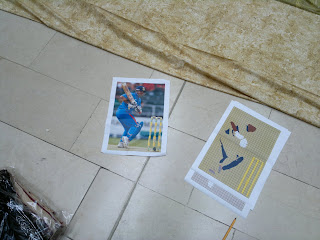 It was slightly baffling, but also hilarious that so many people who walked past as we were putting the art work out could be heard muttering ‘Art Attack’. I have since discovered that Disney have now bought the rights to that classic show of my childhood and I believe it began airing again today! And with a new presenter, no Neil Buchanan – what a gyp! But that also shatters my dreams of resurrecting Art Attack in my own image some time in the future. I could do that. I bet that new presenter couldn’t pull Big Art like this out of the bag. 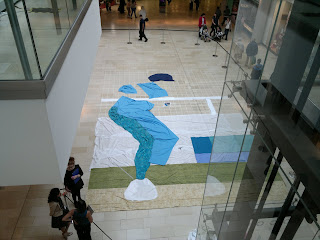 Anyway, back to today’s collage. We made the image of Sachin Tendulkar. Ironic really, since yesterday England sealed a convincing defeat of India, 4-0 in the series AND Tendulkar failed to make his 100th century. However, he is still a great cricketer and will be playing Leicestershire this week so I still standby him as a relevant and topical subject for Big Art!
Mike and I laboured hard for about 9.5 hours to lay this out. There is around 100 yards of fabric, as well as some amounts of beads and wool. The overall image measures 9 x 6 metres, although I cheated a bit and took the blurry crowd background from the top of the image because it would have looked rubbish rendered into this media. 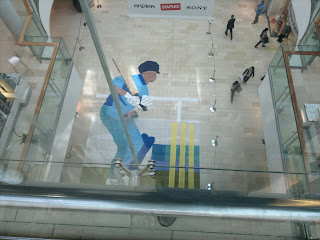 Many thanks to Highcross for putting up with us for the day and giving me a new opportunity to make a huge picture out of lots of the same thing. Thank you to the people from BBC, ITV, the news wire photography guy and the Leicester Mercury for not making me do too many stupid poses for photos and being aware that we had a lot of work to do to get the collage done rather than just talking to them!! Here’s hoping we get the chance to do another Big Artwork. Mike was suggesting that a mosaic made out of cars would be cool, and I agree! 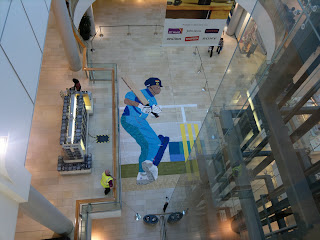