Guess what? Those crazy folks at Beefeater Grill are now doing a breakfast menu! So until 10.30am you can enjoy the glories of a buffet breakfast. Yum. I love breakfast me, best meal of the day. Which is weird, because I forget to eat it so often.
But I digress. In order to celebrate this wonderful new menu, they asked me to make them not one, but two giant mosaics of Pippa Middleton. Turns out they asked the British public who they would most like to have breakfast with and the overwhelming majority apparently said P-Middy. You could say “she’s a nice bit of crumpet”… You see where this is going? 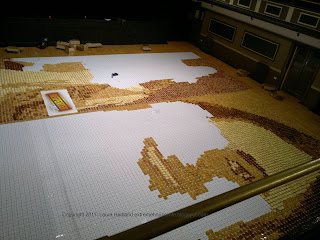 So dutifully, I designed it up and last Saturday we went back to Warrington’s Parr Hall – where this whole crazy giant food based mosaic thing started back in October 2010 and we made it.
Once again my friends and family were on hand for moral support and more importantly, spreading duties. There was plenty of spreading to do. The portrait mosaic was 81 x 111 crumpets and the ‘behind’ shot (as we have been delicately calling it) was 60 x 120 – a grand total of 16 191 crumpets! We had six ‘colour ways’ – buttered, plain, upside down, marmite on upside down, blackcurrant jam and strawberry jam. I reckon somewhere in the region of 10 000 ultimately had spread of one sort or another on them. 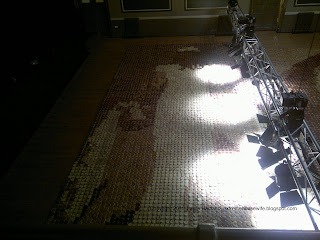 We started at 8am, but couldn’t actually begin laying the crumpets out until 10.30am, when all the cameras and time lapse jiggery pokery had been organised. It was looking very tight time-wise. But thanks to a steady stream of friends and relatives, who came to lend a hand, we got there in the end. It looked a bit sticky for a while when we were running out of spreading utensils as all the plastic knives I’d brought had snapped by that point, but everyone perservered, some people scooping spreads directly from the tubs with their fingers to get the job done. Now that’s commitment!
I have to say I’m really proud of the ‘behind’ shot. When Beefeater were telling me they really wanted that image of Pippa from behind, I thought it was going to be impossible to do in crumpets – after all she’s wearing a white dress and holding the train of a white dress in front of her. But I messed around with the colours, did some testing and I was really, really pleased with the final effect.
And so the day came and went, the crumpets were laid and photographs taken. So sad that my artwork is that transitory I think. I hope my art doesn’t make anyone angry or upset. I hope you can just enjoy it for what it is; big, silly and a bit random.