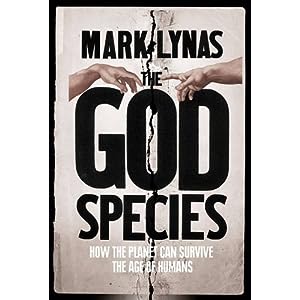 I was sent a copy of The God Species by Mark Lynas to review. This was quite inspirational, not least because I was sent the review copy by Mark Lynas himself. The press release states ‘Lynas is an activist and journalist. He was editor of the website www.oneworld.net and has made many appearances in the press and TV as a commentator on environmental issues.’ Not only this, but in the book he also outlines his role as part time advisor on climate change to the President of the Maldives – becoming in 2009 one of the first nations to pledge to go carbon neutral by 2020. An impressive CV and no mistake, so I was looking forward to reading the book.

And indeed I was not disappointed. The book outlines the impact of a number of ‘planetary boundaries’ – the upper limit to which certain processes or systems can be pushed before the stability and sustainability of the human race and indeed the entire biosphere becomes irretrievably under threat. Leading scientists have discussed and set the parameters on these boundaries according to their global impacts.

These boundaries are biodiversity loss, climate change, the nitrogen cycle, land system change, global freshwater use, chemical pollution, atmospheric aerosol loading, ocean acidification and stratospheric ozone depletion. Hearteningly, some of these boundaries have not been reached by post-industrial society and others, although crossed, could be brought back to manageable levels. And herein is the heart of Lynas’ argument – that ‘the grounds for optimism are at least as strong as the grounds for pessimism’ and all in all, optimism is much more likely to produce action.

There are many arguments in this book which will provide uncomfortable reading for more traditional Greens. Lynas calls upon the political sphere to recreate its banning of CFCs in the mid-80s to join together one more in multilateral agreements which will allow for economic growth and free enterprise, but in a carbon neutral and more sustainable way. Yes, he’s actively advocating economic growth throughout this book, recognising, for the first time that I’ve seen, that telling people to give up flying, or not to heat their house properly in the winter is not the best way to bring them onside with the environmental debate.

He also thoroughly champions nuclear power and the use of genetic engineering on food crops – arguments that previously have been shunned by most self respecting environmentalists. The arguments he puts forward are new to me, however the evidence he provides appears to be well researched, referenced and compelling. It has certainly led me to reconsider my opinion – and to desire to obtain further information to help me clarify my thoughts on the subject.  I would never have thought that I could turn into an advocate for the use of nuclear power, but already the paradigm shift has begun in my brain. Interestingly too, Lynas is not shy about admitting to past errors of judgement, or misreading the evidence to suit an ideological position. This honesty also makes his argument more compelling, demonstrating that firmly held political stances may be holding back progress more than advancing it.

As you can probably tell, this book is well written and cogently argued. The terminology is accessible for the average reader and indeed some of the explanations have clarified to me some environmental issues that I have dimly been aware of since childhood, but never completely understood, such as the problems caused by the run off of nitrogen fertilisers into local water systems. In places the book is so well written as to provoke an extremely strong emotional reaction. The chapter on biodiversity, with its seemingly endless list of the decline and extinction of creatures large and small all around the globe certainly brought me to tears on several occasions – not great for someone who does most of their reading on the bus to and from work each day!

I have not yet had the opportunity to do my own fact checking into Lynas’ key arguments. I suspect they are not perfect, but will stand up to some considerable scrutiny. As with all scientific theory of this nature, and as Lynas himself concedes, his ideas are probably Planetary Boundaries 1.0, with further research and development being necessary to find workable, economically attractive solutions. My only criticism of the book is that Lynas often states the financial benefits of environmentally responsible actions – e.g. saving x amount of rainforest will generate $x in profits. I think that these statistics are genuinely interesting but the cause of these economic benefits could be more clearly stated. If there’s a buck in it, this is what will encourage governments and big business to heed his arguments and if I was keen to get through the book in order to see the full argument and not get bogged down in reference checking, I would assume that other people also skip them to some extent.

More than ever before, my Extreme points system seems hugely relevant. For such a well written, interesting and thought provoking book it can receive nothing less than a carbon neutral 10 out of 10 Extreme points. Buy this book and feel like you can happily change the world, not be bullied into it.