Finally, some of the strawberries in the garden are ripe enough to eat! This prompted me to have a little google around today, looking for nice ideas of what to bake using strawberries – as we don’t have enough for both of us just to eat them plain. This has led me in an interesting new direction.
First of all I came across a recipe competition where your recipe must include strawberries. Given that the prize is Le Creuset and I would probably kill for that stuff, I pretty much decided on the spot that whatever I baked would be my entry.
My next challenge then, was to come up with an original recipe that included my strawberries. This led me into researching flavour pairings. I wanted to find a taste combination that was unusual, I already had in the cupboard and that had a really good flavour. I discovered Khymos’ post about molecular gastronomy and a new form of extreme housewifery was born – extreme baking! 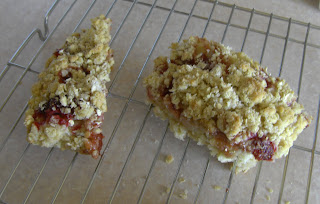 The essence of this is that if foods share a majority of major volatile molecules, i.e. the things that make them smell and therefore taste the way that they do, they are likely to make pleasurable flavour combinations. Much to my surprise, strawberries and coriander were asserted as one such combination.
And so extreme baking is born. Baking stuff using food combinations that people might not normally consider. As ever, once I’d started on this path I realised that we had no eggs, so I had to cobble together this recipe to compensate for that. My recipe, as you can see from the picture, included rose water. However, this made absolutely no contribution to the final taste so I’m dropping it from the written recipe.
Extreme Housewife’s Strawberry and Coriander Crumble Slices 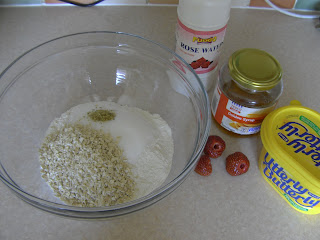 Serves 8
Ingredients:
For the slice:
200g self raising flour
1 tsp baking powder
50g caster sugar
40g oats
2 tsp dry fried and ground coriander seeds
50g butter
2 tbsp golden syrup
175ml milk
For the topping:
100g flour/oats, in whatever proportion you prefer
50g butter
40g caster sugar
75g strawberry jam
75g fresh strawberries, hulled and sliced
Preheat your oven to 180’C. To prepare the slice, put the dry ingredients – flour, baking powder, caster sugar, oats and coriander. Mix in the butter until the mixture resembles a crumble mix. Stir in the golden syrup until well incorporated, then stir through the milk to create a batter. Put to one side while you create the topping. 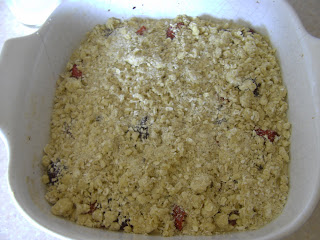 Mix together the flour, oats, butter and sugar to create the crumble topping. Grease your pan (a tin would probably be more effective that what I used if you have it) and pour the slice batter into it. Scatter over your sliced strawberries and dollop the jam in the remaining spaces. Pour your crumble mixture evenly over the top of this, but do not pat it down as this gives a nicer, crispier crumble topping. 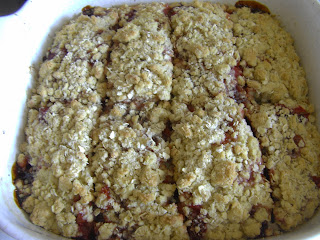 Put into your preheated oven for approximately 25 minutes. You will see the crumble topping turn golden brown and the jam start to bubble just underneath the surface. Bring out of the oven and slice immediately before leaving to cool. After about 5 minutes, you can lift the slices out of the tin and place on a cooling rack to finish cooling. 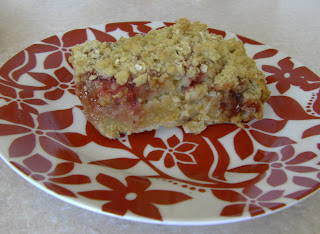 We thought that these slices had a really lovely texture – quite dense and unctuous because of the golden syrup and oats in the slice mix, but still relatively light and moist. The sweetness of the jam also cuts nicely through the main slice and the crumble topping is a lovely addition of further texture.
The strawberry and coriander taste worked really well. Like most good flavours, the coriander is not overpowering, but it does add a very satisfying background note which lingers pleasantly in the aftertaste.