After a little conversation with Penn State Snacks on Twitter, they sent me some of their delicious nibbles to sample and review. I’m already a fan of their Sour Cream and Chive pretzels, so was looking forward to trying some more.

Penn State were the first company to produce pretzels here in the UK in 1996. They sent me a very interesting press release with exciting details of their latest expansion, into popcorn. They will be releasing Sweet & Salt and Monterey Jack Cheese popcorn this summer. That there cheesy popcorn sounds like it’ll be delicious I have to say, however they haven’t sent me any of that so I’m afraid I’m in no position to comment at the moment. Will have to wait for the summer launch in snacky anticipation.

In the press release Steve Harger of Intersnack, the company behind Penn State says “All our snacks offer consumers the health benefits of a low-fat, low-calorie snack, without compromising on taste.” Sounds good to me, so I had no hesitation on making the intrepid dive into tasting the Penn State Worcester Sauce Flavour pretzels. 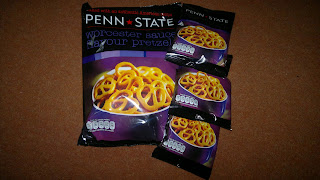 I always find ‘Worcester Sauce’ a bit of an odd choice for a flavour. I think of Worcester Sauce as an ingredient, not something you’d want on its own! However, they are really tasty. The pretzels have a very strong savoury flavour. There is quite a tang with it but it’s not too salty and the plain taste from the middle of the pretzels cuts through the flavouring with the pretzel, biscuity taste making the overall flavour none too strong. They are really satisfyingly crunchy and leave a pleasant aftertaste in the mouth.

I think the packaging looks really smart as well. The colour scheme is classic and appealing, the fonts they use are quite modern looking and I think that this branding holds itself up well against other more premium snack brands. At the time of writing (15/06/11) a mysupermarket.com search for Penn State Snacks puts a 175g bag of Original Salted pretzels at £1.29 in most supermarkets, although they are currently on offer at 65p in Ocado and a good value £1.10 standard price in Asda. This compares favourably to other premium sharer bags – Walkers Sensations are around £1.75 for 150g, for example.

Let’s go back to Mr Harger’s claims about Penn State Pretzels being a relatively healthy snack. The nutritional information on the pack states that a 30g serving, the small pack size, contain 131 kcals – 7% of an adult’s RDA. There is 1.1g of sugar (1% RDA), 3.4g of fat (5% RDA) and 0.5g salt (8% RDA). Given their claims that this is a relatively healthy snack, let’s see how it compares to some other leading brands. The Walkers website does not have the detailed nutritional information that Penn State has per product. Instead, their nutritional information page only talks about how they cook in sunseed oil for a lower fat content and have reduced the salt. They state that their crisps now contain 0.9g of saturated fat, 5% RDA. Penn State Snack contain 0.4g – 2% RDA. Chalk one up for Penn State there. The Walkers salt content for a ‘standard bag’ is now 0.5g, the same as Penn State. 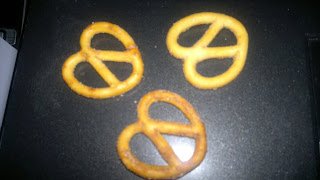 I managed to find online information about the nutrition in Pringles on their website. In a 28g serving, slightly less than the Penn State snack size, they have 150 kcals, 9g fat, 0 sugars and 150mg of sodium, which is 6% RDA. On this basis, Penn State are clearly much lower in fat, although the calorie and salt content are relatively similar.

There you have it. Due to popular demand, Penn State will be relaunching their ‘tang-tastic’ Worcester Sauce flavour pretzels after discontinuing them in 2009. They are baked, not fried – and while I would not personally claim snacks of this nature to be ‘healthy’, I would certainly say that they are a healthier option than some other brands. Certainly there is all of the taste you would want. I score them a tang-tastic 7 out of 10 Extreme Points. This is not my personal favourite flavour, however I did enjoy them. I am looking forward to getting the sharing bag out when friends come round, I think they will fly out of the bowl!