We have just returned home from our latest mosaic making adventure. This time we had the pleasure of visiting Matera, Italy. We made a giant Mona Lisa, known as La Gioconda in Italy! She is a mosaic composed of 10080 pieces of bread. The colours are formed through a combination of plain bread, toast and bread with dark or milk chocolate on them.

It wasn’t an easy project by any means. The main issue that really increased the workload incredibly was that the bread was the wrong size! We had the backing printed up with 10x10cm squares, but it turned out that we could not get that sized bread in the end, so every single piece had to be cut to fit!

It was insane, because of course, the more toasted the bread is, the more likely it is to shatter if you attempt to trim it! Also, the European sliced bread has a sugar content which made it slightly more difficult to work with.

The mosaic was made for a programme for Nippon Television in Japan. The programme will feature the three actresses who form MoriSanchu – Kurosama Kazuko, Murakami Tomoko and Oshima Misuki, who have to ‘challenge the world’! They were a really fun bunch of people to work with, just as animated in real life as they are for the camera. I have to admit though, working in a combination of Japanese, Italian and English made everyone very tired, so it’s good to be back in dear old Blighty and just speaking English again! However, I can now count very convincingly to 5 in Japanese. You learn something new every day!

It has been a great experience. We made the mosaic pieces separately in the local media centre hall and basically took over the whole place! We were helped by MoriSanchu, the Japanese film crew, and representatives from the local consortium who represent the famous Pane di Matera. Matera has long been known as Italy’s City of Bread, so you can see many factors came together to make this work!

The mosaic measured 9m by 11.2m and was composed entirely from edible materials, in deference to the hunger that has been caused by the terrible natural disasters in Japan recently. Even the glue we used to stick the tesserae down was glucose syrup. Once the mosaic was completed, it was left out for the day for the people of Matera to enjoy. We gave out all the remaining bread, and some lovely Matera bread for free for everyone to try. Once we finally got the work together, there was a real carnival atmosphere. Now we have a couple of weeks to wait until the programme is finished and aired in Japan!

Another incredible experience, definitely worthy of the Extreme Housewifery tag! 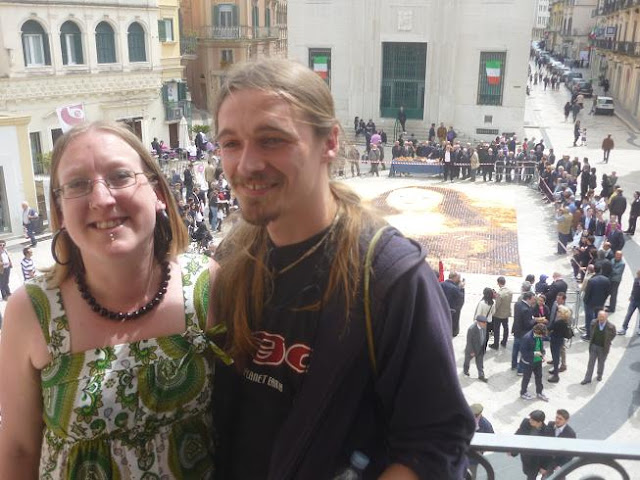