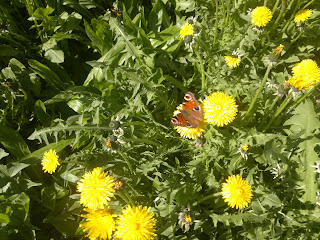 Everybody seems to be enjoying my gardening posts so far, and as the weekend has been so beautiful, we’ve managed to do even more, so I thought I’d do another post!

Yesterday, we went to the local garden centre. It’s only a short walk (about 2250 steps according to my pedometer!) but it takes us into the next village, which affords some lovely views of Bradgate Park and some other nice countryside views to take in on the way.

There wasn’t a huge amount of new things that interested us at the garden centre. I think we have tried so many things already and I have such a stash of seeds now that there is no need for us to go into a buying frenzy any more.

That said, I always like looking round the plants and now am especially interested in the unusual varieties of veg seeds that are available. I think instead of courgette and melon, next year I’ll do some more unusual squashes in the gro-bags.

We did come away with two purchases though. I’ve finally given in to the temptation to grow strawberries, so got myself a single ‘Florence’ plant, which is apparently good for container growing, which is what I am intending to do with it. On the walk home, we finally got around to treating ourselves to a small runner plant off the MASSIVE wild strawberry that we discovered just round the corner in some semi-derelict land near our house a couple of seasons ago. It’s gone a bit curly, perhaps because my natural reaction to newly planted plants, which is to water them. I think the wild strawberries need a much drier environment, so I’ll have to knock the splish splosh on the head for that one. We’ll see how it goes. 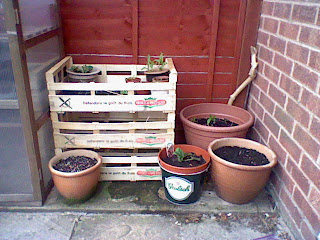 After we’d been to the garden centre, it would have been rude of us not to visit the local pub for an English Rose cocktail, particularly as with our ‘Locals’ card (or Yokels card as The Boy referred to it) they were two for one. This was lovely in the sunshine.

Making our way back through the village, we spotted some crates by the road outside the greengrocers. Upon nipping in, we were informed they were being trashed so we were welcome to take them if we wanted. Woo hoo! Free crates! Eventually, I’d like to line them and use them as planters in their own right, but as I have nothing to line them with yet, they’ve just turned into a bit of a decorative plant pot holder. Love em.

We were trying to find more dodgy items to put plants in at the local car boot this morning, but the price just wasn’t right – 2 chamber pots were £1 each, but they wouldn’t take £1.50 for the two… And an empty wooden port bottle box, which the guy was asking a pound for! Honestly! 20p or so and I’d have had it, but it wasn’t worth a pound! Ah well, the search continues. I quite want to get some cheapy wellies to fill with plants also… 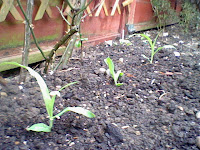 There have been many other jobs undertaken in the garden this weekend. As you can see from the picture, half of the sweetcorn has been planted out as planned, to see how it fares. Despite me not having intended to grow tomatoes this year, we have loads popping up with our other seedlings, from the seeds that haven’t been properly broken down in the compost!! So some of those have been pinched out and given their own pots. I give up, obviously the universe wants me to grow tomatoes!

I also got some broad beans at the garden centre, for the princely sum of 12p. So they’ve been planted out, and I’ve also started the traditional ‘cut and come again’ tray of mixed baby lettuce leaves. There have been various other plantings, including perpetual spinach (in a container this year, not planting that stuff in the border again) and replanting the carrots from the main tray, which were looking a bit unhappy at the lack of depth they could get their roots to. Finally, we’ve made a start on the front garden – the neglected wilderness. I think because it’s tiny and there’s not really anything you can eat out there, we tend to forget about it. But I’ve taken all the weeds out of the lawn and The Boy has mowed, so it’s ready for the leaves to be gathered, the little bushes to be trimmed and all the flower seedlings to be transplanted out there when they’re a bit stronger! 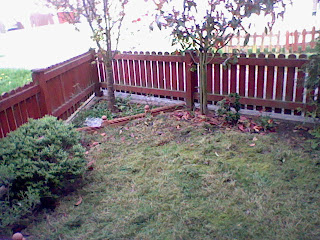